How can anyone compare the televising of military service personnel – members of an invading force - being asked their name, rank and age with the tortured screams of a toddler fighting for his life? 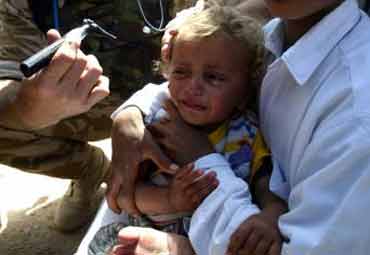 Britain’s ITV showed a small Iraqi boy lying on a stretcher in a Baghdad hospital. He was shrieking from pain caused by burns over more than two-thirds of his tiny body. I could see from the top half of his face, which had escaped the flames, that he had been an exceptionally beautiful infant with huge dark eyes, now stricken with fear.

The reporter said that this angelic looking child was not expected to last the day. This was the first of a juxtaposition of events which brought home to me just how immoral is the American-led invasion of Iraq.

Fighting back a flood of emotion and anger, I was then confronted with the Pentagon press briefing. Its spokeswoman talked about Iraq’s alleged misuse of the Geneva Conventions by its parading five US prisoners of war on television.

How can anyone compare the televising of military service personnel – members of an invading force - being asked their name, rank and age with the tortured screams of that toddler fighting for his life?

Those soldiers knew that their job involved their capture by enemy forces or even the loss of their lives. They are likely to return home a little worse for wear. The child in the hospital isn’t going to see his home again. He isn’t left with the choice whether or not he wants to be a soldier, or a lawyer or a doctor. By the time you read this that child will be dead along with thousands of other victims of Bush’s wish to ‘free’ the Iraqi people.

George Bush and his Defense Secretary Donald Rumsfeld have been talking a lot about the Geneva Conventions these days. Not so during America’s invasion of Afghanistan when they dropped their J-Dams and missiles on a compound in Mazar-e-Sherif, killing hundreds of Afghans and Arabs.

There was no talk about the Geneva Conventions when contingents of Arabs and Moslems were flown to Guantanamo Bay, shackled, handcuffed, gagged, hooded and chained to their aircraft seats only to be thrown into chicken coops open to the elements.

There was no mention of any conventions when John Walker Lindt was interviewed while he lay on a stretcher in Afghanistan. Oh, yes. These were ‘detainees’.

They are the disappeared whose lives were not dignified with the title ‘prisoner of war’, except for Lindt, of course, who got special treatment due to his American passport. The others were left to rot without contact with their families and no recourse to legal representation.

Donald Rumsfeld who is the very person, who once said that he doubted that most of them would ever be released, is now bleating in the most hypocritical fashion about the Geneva Conventions.

Rumsfeld says that any mistreatment of the American prisoners of war will be treated as a war crime, but today the southern Iraqi city of Basra is without electricity and water and as the days go past the health of its inhabitants will be at risk. This is a war crime Mr. Rumsfeld. This is a true crime against humanity.

When US soldiers looked on while the Afghan War Lord General Dostum shoved Afghan prisoners into metal containers and left them without water for three days under the sun until most of them died, did Rumsfeld utter the words ‘war crime’. Not at all. Instead, Dostum was rewarded with a place in the Afghan government alongside the American puppet Hamid Karzai.

And has the White House or the Pentagon ever said a world about Israel’s breaches of the Geneva Conventions? Even as 10 per cent of Jenin was demolished, Palestinian refugees used as human shields and ambulances prevented from reaching the sick and injured, the Bush administration stayed silent.

Returning to that same Pentagon briefing, we heard how those Iraqi men who are defending their mothers, fathers, wives and children, defending the soil of their own country, are going to be labeled ‘terrorists’ by the Bush administration if they remove their military uniforms. These men should play by the ‘rules’. They should not be ‘fighting dirty’ as a Sky News anchor keeps accusing them of doing.

While an invading army sends its pilots to drop bombs on heavily populated civilian areas from 30,000 feet, and uses its high-tech weaponry, laser and satellite-guided missiles against a people, who have no serious defense capabilities except their warriors, isn’t it clear just which side is ‘playing dirty’?

If people with tanks surrounded my house, their helicopter gun ships circling overhead and their bullets were screaming through my windows, should I be looking into ancient tomes on international law to see what rules I should follow?

It seems that the Iraqis are supposed to label themselves as combatants, conveniently wearing a recognizable uniform, while fighting using the Queensbury Rules. "Oh sorry, old chap. I really mustn’t thump you in the balls. Please feel free to drop your bombs on my wife and children while I dash off to get my uniform out of the dry cleaners".

The President’s men – Cheney, Rumsfeld, Perle and Wolfowitz - as far back as 1997 planned this invasion. Iraq is just the first stop, a launching pad from where Bush and friends will re-draw the map of the region to suit their own self-interested agenda.

As their forces rush to prevent the oil fires from consuming the black gold, their politicians maneuver to wrest the oil for food escrow account from the hands of the United Nations. As they talk about saving the country’s oil for the future of the Iraqi people, they are doling out multi-million dollars contracts to American companies, poised to offer subcontracts to British firms, to rebuild the infrastructure, which they themselves are in the process of tearing down. Many of those companies are headed by cronies of the Bush camp.

Those who assert that the US administration is working from humanitarian motives should ask themselves why, when the American economy is failing, Bush asks for 75 billion dollars to feed the war effort… and this for a start. What is going to replenish those coffers if not for Iraqi oil? If Bush is suddenly suffused with such a generous humanitarian spirit, then why isn’t more American taxpayer’s money going to Africa, where people are dying of HIV Aids and malnutrition?

Oh, yes. Iraq has weapons of mass destruction with which it is threatening the United States and the world. As we watch the Iraqi army lob less than smart missiles onto the sands of Kuwait and roll around in ancient Russian tanks clutching rusty rifles, does anyone still take this seriously?

In fact, Russia has gone as far as to warn the Coalition that if weapons of mass destruction are suddenly produced to back up their, thus far, unsubstantiated claims, they will be subject to investigation by UN weapons inspectors. The world simply isn’t going to fall for that one. If they want to get away with it, then they will have to be a lot more professional than they were when flourishing the plagiarized intelligence dossier and the forged uranium-related correspondence between Niger and Iraq.

Just recently they have admitted one motive for their sudden interest in disarming Saddam Hussein. America and Britain want regime change in Iraq, a motive, which is not recognized by the United Nations Charter. At first, they were shy about exposing their desire to topple the Iraqi regime. The British Prime Minister denied that this was their aim. Later on, he didn’t even bother to do that. The mask is finally off. When it comes down to a battle between might and international law, might wins.

Now they want to have their war legalized by the UN under the pretext that they want to rebuild Iraq and provide aid and food to its people.

Without this stamp of legality, the hands of the World Bank and the IMF are tied, so now they are attempting to use emotional blackmail on countries like Russia and France who thus far have refused to bend to their will. Both Putin and Chirac have again threatened to use their vetoes if any attempt to render this war respectable is pursued.

Lawyers all over the world are already planning how they can instigate suits against the leaders of the US and Britain for war crimes. The British and the Australians are extremely vulnerable since their countries have both signed up to the International Court and this is part of the reason that Blair is so against any use of cluster bombs or depleted uranium during this conflict, which doesn’t sit well with the Pentagon.

No doubt with the damacles sword of war crimes hanging over him, an Australian pilot recently disobeyed his US commander and refused to drop his deadly payload on a heavily populated civilian area.

The fresh faced teenage American and British troops in theatre have been lied to as well. They were told ‘Enduring Freedom’ would be a walk in the park. They were told the Iraqi people would throw flowers in front of their tanks and armored personnel carriers.

They expected garlands around their necks and trays of welcoming candies from a people delighted to rid themselves of their leader. This has not happened. Instead, they are fighting the dust and the heat, the fear and the bullets and, worse, the cold hatred of those they believed they were coming to save.

Sure, there have been a few orchestrated photo-ops, dutifully relayed by embedded reporters, showing soldiers allowing smiling Iraqi children in Umm Qasr to look through their binoculars. There have been a few smiles of relief from some of the poorest and downtrodden civilians who are glad just to be alive. But this is only the true picture for the more naive among us.

Whatever one thinks of Saddam Hussein, we must surely admire the spirit of the Iraqi people. In Baghdad, they are going about their business as though their city was not being attacked with such ruthlessness, night after night. They are proud of their country, one of the most ancient in the world, and they are determined to protect their families.

The Iraqis are mostly Arabs. Those in the pro-war camp who expected to find a cowed and cowardly people have been sorely mistaken. As Arabs they will never accept an occupying force on their land. The Palestinians haven’t and the Iraqis won’t either. As tribal people, their honor and their dignity will always come first, well before all the consumerist enticements their enemies display before them.

The Coalition of the Cowardly may win this campaign with its military might but it will never win the war. The Iraqis will never forgive and neither will the Arab world, which is just beginning to emerge from its stupor to wonder ‘which of us will be next?’

The Bush administration says that it wants to win hearts and minds. They haven’t a hope in hell. I will never forget the suffering mirrored in the large dark eyes of that tiny child who is no longer with us. Neither will the Iraqis.

Linda S Heard is a specialist writer on Mid-East affairs.