Sixty years after its birth, India faces a number of serious problems, but Pakistan's problems are on a different scale; indeed the country finds itself at a fundamental crossroads. We are back to the old question, and it is not just whither Pakistan 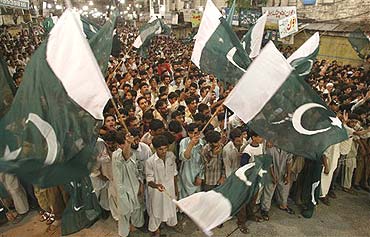 Amid all the hoop-la surrounding the 60th anniversary of Indian Independence--inflatable Taj Mahals floating down the Thames, wall-to-wall Sanjeev Bhaskar on the telly, Shah Rukh Khan popping up at Madame Tussauds--almost nothing has been heard from Pakistan. Nothing, that is, if you discount the low rumble of suicide bombings, the noise of automatic weapons storming the Red Mosque, and the creak of slowly collapsing dictatorships.

In the world’s media, never has the contrast between the two countries appeared so stark: one is widely perceived as the next great superpower, famous for its software genii, its Bollywood babes, its strongly growing economy and its legions of brilliant writers and super-rich steel magnates; the other written off as a failed state, a world centre of Islamic radicalism, the hiding place of Osama Bin Laden and the only US ally which Washington appears ready to bomb.

On the ground, of course, the reality is very different, and first time visitors to Pakistan are almost always surprised by the country’s visible prosperity. There is far less poverty on show in Pakistan than in India, fewer beggars, and much less utter desperation. In many ways the infrastructure of Pakistan is much more advanced: there are better roads and airports, and much more reliable electricity. Pakistani middle class houses are often bigger and better appointed that their equivalents in India.

Moreover the Pakistani economy is undergoing a very similar construction and consumer boom to that in India, with growth rates of 7%, and what is currently the fastest-rising stock market in Asia. You can see the effects everywhere: in new shopping centres and restaurant complexes, in the hoardings for the latest laptops and ipods, in the cranes and buildings sites, in the endless stores selling mobile phones: in 2003 the country had fewer than three million cellphone users; today apparently there are almost 50 million. Car ownership has been increasing at roughly 40% a year since 2001; Foreign Direct Investment (FDI) has risen from $322m in 2002 to $3.5bn in 2006.

Mohsin Hamid, author of the bestseller The Reluctant Fundamentalist, wrote about this change after a recent visit: having lived abroad as a banker in New York and London, he returned home to find the country unrecognisable. He was particularly struck by "the incredible new world of media that had sprung up, a world of music videos, fashion programs, independent news networks, cross-dressing talk-show hosts, religious debates, and stock-market analysis:

"I knew, of course, that the government of Musharraf had opened the media to private operators. But I had not until then realized how profoundly things had changed. Not just television, but also private radio stations and newspapers have flourished in Pakistan over the past few years. The result is an unprecedented openness… Young people are speaking and dressing differently. Views both critical and supportive of the government are voiced with breathtaking frankness in an atmosphere remarkably lacking in censorship. Public space, the common area for culture and expression that had been so circumscribed in my childhood, has now been vastly expanded. The Vagina Monologues was recently performed on stage in Pakistan to standing ovations."

Little of this ever gets reported in the Western press, which prefers its stereotypes simple: India- successful; Pakistan- failure. Nevertheless, despite the economic boom there are three serious problems which Pakistan will have to sort out if is to continue to keep up with its giant neighbour--or indeed continue as a coherent state at all.

One is the fundamental flaw in Pakistan’s political system. Democracy has never thrived here, at least in part because landowning remains almost the only social base from which politicians can emerge. In general the educated middle class--which in India seized control in 1947, emasculating the power of its landowners--is in Pakistan still largely excluded from the political process. As a result, in many of the more backward parts of Pakistan the local feudal zamindar can expect his people to vote for his chosen candidate. As the writer Ahmed Rashid put it, "In some constituencies if the feudals put up their dog as a candidate, that dog would get elected with ninety-nine per cent of the vote." Such loyalty can be enforced. Many of the biggest zamindars have private prisons and most have private armies.

In such an environment politicians tend to come to power more through deals done within Pakistan’s small élite than through the will of the people. Behind Pakistan’s swings between military governments and democracy lies a surprising continuity of interests: to some extent, the industrial, military, landowning, and bureaucratic élites are now all inter-related and look after one another. The current rumours of secret negotiations going on between Musharraf and Benazir Bhutto are typical of the way that the civil and military élites have shared power with relatively little recourse to the electorate.

The second major problem that the country faces is linked with the absence of real democracy, and that is the country’s many burgeoning jihadi and Islamist groups. For twenty-five years, the military and Pakistan’s powerful intelligence agency, the Inter-Services Intelligence, or ISI, have been the paymasters of myriad mujahedin groups. These were intended for selective deployment in first Afghanistan and then Kashmir, where they were intended to fight proxy wars for the army, at low cost and low risk. Twenty eight years after the Soviet invasion of Afghanistan, however, the results have been disastrous, filling the country with thousands of armed but now largely unemployed jihadis, millions of modern weapons, and a proliferation of militant groups.

While the military and intelligence community in Pakistan may have once believed that they could use jihadis for their own ends, the Islamists have followed their own agendas. As the recent upheavals in Islamabad have dramatically shown, they have now brought their struggle onto the Pakistani streets and into the heart of the country’s politics.

Ironically, it was exactly groups such as Jaish-e-Mohammad, who were originally nourished by the military, that have now turned their guns on their creators, and which have been responsible for the recent rash of assassination attempts on President Musharraf. It is now clearer than ever that Musharraf cannot have the blessings of the Americans while continuing to employ the jihadis. In the battle for the soul of Pakistan, Musharraf has to choose

The third major issue facing the country is its desperate educational crisis. No problem in Pakistan casts such a long shadow over its future than the abject failure of the government to educate more than a fraction of its own people: at the moment a mere 1.8% of Pakistan’s GDP is spent on government schools. The statistics are dire: 15% of these government schools are without a proper building; 52% without a boundary wall; 71% without electricity.

This was graphically confirmed by a survey conducted two years ago by the former Pakistan cricket captain turned politician, Imran Khan, in his own constituency of Mianwalli. His research showed that 20% of government schools supposed to be functioning in his constituency did not exist at all, a quarter had no teachers, and 70% were closed. No school had more than half of the teachers it was meant to have. Of those that were just about functioning, many had children of all grades crammed into a single room, often sitting on the floor in the absence of desks. There is little wonder that Pakistan ranks among the very lowest countries in the world according to the human development index of the UNDP.

This education gap is the most striking way in which Pakistan is lagging behind India: in India 65% of the population is literate, and the number rises every year: only last year, the Indian education system received a substantial boost of state funds; and there is anyway a long tradition among Hindus of making terrific sacrifices in order to educate children.

But in Pakistan the literacy figure is under half (it is currently 49%), and falling: instead of investing in education, Musharraf’s military government is spending money on a cripplingly expensive fleet of American F-16s for its Air Force. As a result out of 162 million Pakistanis, 83 million adults of 15 years and above are illiterate. Among women the problem is worse still: 65% of all female adults are illiterate. As the population rockets, the problem gets worse.

The virtual collapse of government schooling has meant that many of the country’s poorest people who wish to enhance their children’s hope of advancing themselves have no option but to place the children in the madrasa system where they are guaranteed an ultra- conservative but nonetheless free education, often subsidised by religious endowments provided by the Wahhabi Saudis.

Altogether there are now an estimated 800,000 to one million students enrolled in Pakistan’s madrasas. Though the link between the madrasas and al-Qa’eda is often exaggerated--the overwhelming majority of international Salafi jihadis associated with Bin Laden’s group are middle class and educated in Western-style colleges--it is true that madrasa students have been closely involved in the rise of the Taliban and the growth of sectarian violence; it is also true that the education provided by many madrasas is often wholly inadequate to equip children for modern life in a civil society.

Sixty years after its birth, India faces a number of serious problems--not least the growing gap between rich and poor, the criminalisation of politics, the flourishing Maoist and Naxalite groups that have recently proliferated in the east of the country. But Pakistan’s problems are on a different scale; indeed the country finds itself at a fundamental crossroads: as Jugnu Mohsin, the publisher of the Friday Times recently put it, "after a period of relative quiet, for the first time in a decade, we are back to the old question: it is not just whither Pakistan, but will Pakistan survive?" On the country’s 60th birthday, the answer is by no means clear.

William Dalrymple’s new book, The Last Mughal: The Fall of a Dynasty, Delhi 1857, published by Bloomsbury, has just been awarded the Duff Cooper Prize for History.