Why The Police Fails To Combat Terrorism

Terrorists strike once in a while and at random whereas the police terrorise and extract bribe every day from the very people who could act as their "eyes and ears" -- street vendors, rickshaw pullers, rag pickers and other urban poor... 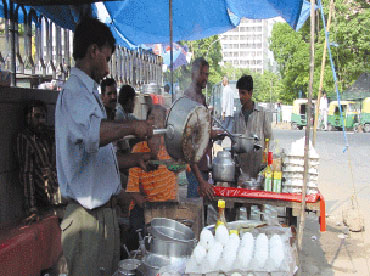 In response to the increasingly sharp criticism from citizens and media alike that the government is proving itself to be impotent in combating terrorism, on 28th July 2008, the Delhi Police was reported to have launched "Eyes and Ears" --  a program to gather intelligence regarding the movement and plans of terrorists.  The idea apparently was to mobilize street vendors, cycle rickshaw pullers, auto drivers and other self employed persons who earn their living working on the streets, to act as the "eyes and ears" of the police and provide inputs on the movement of suspicious elements in their respective areas.

I had first heard this term from the super cop of Punjab, KPS Gill on August 28th 2001. Manushi had specially invited him for a Public Hearing of street vendors and cycle-rickshaw pullers because we were finding it hard to convince the Delhi Police officers that indiscriminate crackdown on street vendors under the guise of maintaining security by sanitizing areas was the wrong approach. He publicly shared his experience of defeating terrorism in Punjab by making these very ordinary citizens--hawkers, rickshaw pullers, porters, barbers, dhobis--etc act as "eyes and ears" of the police.

He said their contribution could be vital for two reasons:

Therefore, Gill said, he worked hard to win their confidence and it paid rich dividends.  Having successfully mobilized vendors and other street based daily earners, Gill realized the value of building a relationship of trust with them and became a strong supporter of Manushi’s endeavours to dismantle the unrealistic License Quota Raid Raj for street vendors that keeps them trapped in a web of illegality and allows policemen and municipal inspectors to fleece them of a large part of their earnings.  He openly asserted that far from constituting a security risk, areas that have a lively presence of vendors are relatively safer than deserted neighbourhoods.

In 2001, Manushi’s investigations had revealed that in Delhi alone, street vendors are robbed of at least Rs. 500 crores a year by way of bribes and fines to the police, touts with political patronage and municipal employees. These bribes are extracted through a wide range of coercive tactics, including beatings, arbitrary clearance operations, confiscation and destruction of vendors’ goods.

Even though Manushi’s endeavours have led to major reforms at the policy level, it is tragic to see things getting progressively worse for street vendors at the ground level. Even our own lives are seriously endangered because we have earned the wrath of extortionist mafias. Bribe rates have increased; the scale of clearance operations has also increased. They have become more vicious, more frequent and more determined, especially now that the administration has the added excuse of "beautifying" the City in preparation for the Commonwealth Games. Even though the National Policy for Street Vendors mandates that vendors cannot be forcibly evicted from "natural markets" in the name of beautification and without being provided appropriate alternatives, the eviction operations are taking place brazenly on an unprecedented scale in open defiance of the National Policy and even Supreme Court rulings.

The Delhi Police Commissioner is known to have given strict instructions that not a single street vendor should be allowed on the entire Ring Road encircling Delhi.  Large parts of the City, including commercial centres like Nehru Place have been quietly declared as  "Zero Tolerance Zones" for street vendors. This in effect means that the hands of the police have been further strengthened which in turn means that despite paying higher bribes vendors are more vulnerable, more insecure and totally at the mercy of petty criminals who run "protection rackets" The same situation prevails with regard to cycle rickshaw pullers and auto drivers.

In such a scenario, the KPS Gill plan of using vendors, hawkers and rickshaw pullers as the "eyes and ears" of the police cannot bear any fruit. We are facing a situation whereby the eyes and ears are so terrorized because the "head" treats them with active hostility and disdain. After a decade-long work with street vendors, I find that these people are far more terrorized of our own police than they are of ISI terrorists. The reason is simple: Terrorists strike once in a while and at random whereas the police strike terror every day and target the street vendors, rickshaw pullers, rag pickers and other urban poor in a systematic manner and consider the money they fleece from these people as their legitimate due.

Gathering quality intelligence requires not only proper training and tools of investigation but also the trust of the citizens at large. If 90% of a police man’s time goes into socializing with touts who bring them their real income, they are as easily likely to turn a blind eye to suspicious elements if suitably bribed, even if they are into terror plots. If all they look for is opportunities to make the extra buck, they have to turn a blind eye to the activities of criminals because such elements alone will cough up hefty bribes without protesting. In such a scenario, they are left with little time or inclination to develop the skills required to track terrorists and other subversive elements.

Today, most citizens, especially the poor, dread entering a police station more than the gates of hell.  Even in high profile cases such as the Nithari murders, the police not only fail to take note of serious crimes being committed against them but also often harass and threaten the victims who dare pursue with their complaints. Let me narrate the real story of the sad fate of one such man who tried to act as the eyes and ears of the police and the fate he suffered as a result.

A few months ago, the teenage son of a Muslim carpenter I know well was abducted while going to school, which is walking distance from his house in one of trans-Yamuna colonies. Let us call the man Aamir and his son Naseem. Aamir moved heaven and earth to get the police to register a case of abduction but without success. In fact, they added insult to injury by ridiculing the possibility of abduction and told him that the boy is likely to have run away on his own. They even joked that he may have absconded to join some terrorist gang!  Aamir pleaded with the police that his son was very well adjusted and serious minded and had never socialized with lumpen elements. In desperation, he even went so far as to say that even if their suspicion regarding Naseem joining a terrorist group had some basis, it was all the more reason to register a case and trace the boy. He could not even get an FIR registered. I then sent Aamir to an NGO working on child traffic but even they could not help him get an FIR registered.

Aamir traveled the length and breadth of the country going to even distant relatives in far away Assam to track down his son but got no clue. Nearly six months after his disappearance, Naseem returned home looking like a ghost. He had clear evidence of injuries all over his body and narrated a horrific tale about how he was rendered unconscious with a chemical-laced handkerchief and abducted in a Maruti Omni right near a police post. Thereafter, he was taken to some unknown place and kept locked in a basement with more than 60 other children in a building constructed away from habitations and surrounded by fields. They were not allowed to step out of the basement at all and made to work in a factory that manufactured and assembled mechanical parts that looked to him like they were meant for making illicit guns. He and some others tried escaping twice but were caught and severely beaten up. But he was lucky in his third escape when he managed to hide in the surrounding fields and crawled all night to reach the nearby railway station at Roorki.

When Aamir took his son to the thana to report the return of Naseem, he was subjected to still more ridicule and humiliation. He was accused of cooking up a story, and asked jeeringly: "Why would only your son be abducted, when there are so many other children living in the area?" In addition, the police started harassing the family, alleging that they needed to investigate Aamir’s terrorist links! The situation got so menacing that Aamir had to send his son into hiding and the family began looking for a house in some other locality. I tried to persuade him to come with me to the Police Commissioner so that his son could help the police rescue other trapped children and bust this racket. But nothing on earth could persuade him to have any further dealing with the police because by now he was convinced that the police was hand in glove with the gang and that the police represented a greater danger to his son’s life than his abductors because they seemed rather annoyed at his return.

The success of anti-terrorism operations depends on the willingness of law-abiding citizens, including those from the groups that are suspected of terrorism, to assist the police in tracking terrorists. The Muslim community is likely to be far firmer in rejecting terrorism and report on the activities of suspicious elements if they could trust the police to be fair and non-partisan. However, if citizens see the police spend most of their time collecting bribes through terror and harassment and openly socialize with and patronize local criminals would they have the confidence or motivation to report against suspicious elements to the police? A Bengali saying sums up the perception of the ordinary citizens very well: Baghe kate 16 ghav, police kate 32 ghav. (If a tiger attacks you are likely to end with 16 wounds, but one who is targeted by the police will end up with at least 32 wounds).

Today very few citizens depend on the government for security and protection. Those who can, try to buy their security. The widespread proliferation of gated communities whereby the well-off people are organizing their own parallel security arrangements amounts to declaration of "No Confidence" in the police. Those of us who can’t afford personal security live Allah Bharose.

But even God cannot help citizens if they become passive and acquiescent or merely indulge in emotional outbursts against the government in general and the police in particular. This is therefore the time to press for police and judicial reforms--to put our heads together to figure out in minute detail what kind of accountability principles we need to institutionalise in order to make our police force capable of providing us security of life and property. That also requires understanding the problems the police face. They are poorly selected, poorly paid, poorly trained, poorly equipped and are denied even basic amenities to perform their tasks with efficiency. The other day when I asked a Beat Constable why he was standing and chatting at a picket meant to check all incoming vehicles, he remarked: "Madam, do you expect a constable who earns a measly 9000 rupees a month after 15 years of service, who is made to stand in hot sun or freezing winter for such inhuman hours without any protection and who is provided a mere danda and a torch to flash inside vehicles to act like James Bond?"

If those who are appointed as the guardians of law and order feel so helpless, if they are themselves treated so shoddily, they are bound to have low self-esteem.  And people with low self-esteem invariably turn dangerous for society.