Why London Is Fuming At China

China better watch out, given that increasing numbers of Chinese coming to London, students and tourists alike 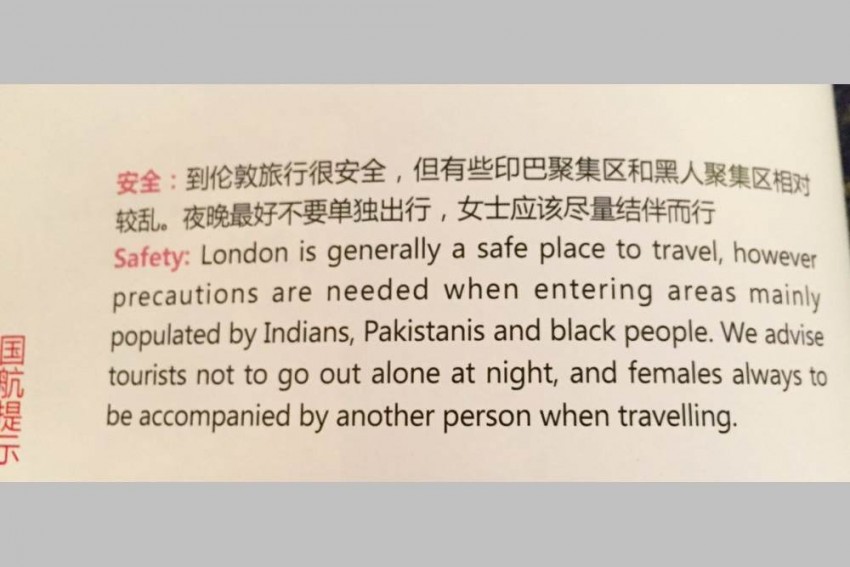 Air China has reportedly warned fliers that 'precautions' should be taken when visiting areas in London populated by 'Indians, Pakistanis and black people'.
Nabanita Sircar September 08, 2016 00:00 IST Why London Is Fuming At China 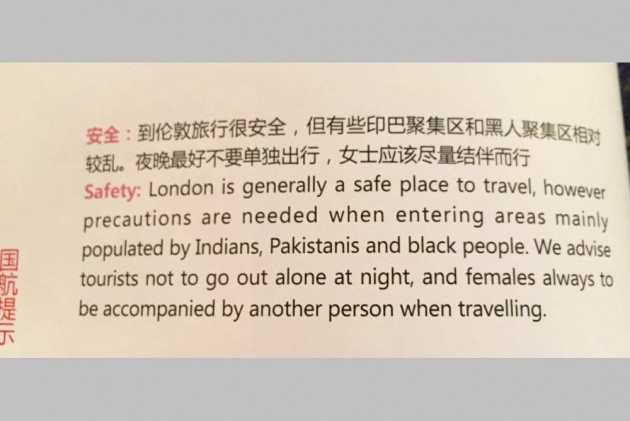 This time it has nothing to do with the Hinkley nuclear plant, but China is back in news and London is furious. In a bizarre warning, Air China has reportedly warned fliers that 'precautions' should be taken when visiting areas in London populated by "Indians, Pakistanis and black people". The comments were made in an article in the airline's in-flight magazine Wings of China. It even advised tourists not to go out alone at night, and for females to be accompanied when travelling.

The comments were noticed by Haze Fan, a Beijing-based producer of US-based CNBC who was so shocked she tweeted a picture of it to Mayor of London Sadiq Khan asking him what he thought.

Unsurprisingly, Londoners and politicians are equally outraged. Virendra Sharma, MP for Ealing Southall, which has a high Indian population has invited Air China to visit his constituency to see how safe it is. He has also requested the magazine to be removed from circulation. He said, "I will await their response, and if an appropriate one is not forthcoming I shall feel forced to question whether Air China is a fit company to operate in the UK."

The airline operates two flights per day from Beijing to London Heathrow. VisitBritain figures show that the number of trips to the UK from China rose by 46% last year to 270,000.

Dr Rosena Allin-Khan, Labour MP for Tooting, which has one of the largest Indian and Pakistani population in London, said: "My initial thoughts were that the comments were outrageous. I think that it is offensive to Londoners and I would like to see it removed. I would also like to ask the airline why they thought these precautions needed to be taken.

"Why they feel they needed to warn people of something that is not reflective of London at all? We pride ourselves on having a wonderfully diverse community, and this may mean people come here with a different idea, it is worrying that some may arrive concerned." She has invited the Chinese Ambassador to visit Tooting.

An angered Lambeth and Southwark London assembly member Florence Eshalomi said, "You couldn’t make up these outdated and near-on racist views. I keep thinking, is this 2016? If airlines have a problem with that then we don’t want them in London." She said she'd be happy to offer Chinese tourists a tour of areas like Peckham, Brixton and Newham where they would be 'welcomed with open arms by our diverse communities.'

The civil rights campaign group Hope Not Hate spokesman said: "It beggars belief to understand how they could have been written in the first place. They should be removed immediately. Londoners deserve an apology."

China better watch out, given that increasing numbers of Chinese have been coming here,  students and tourists alike, going in bus loads, at regular intervals everyday to designer shopping outlets like Bicester Village, near Oxford. 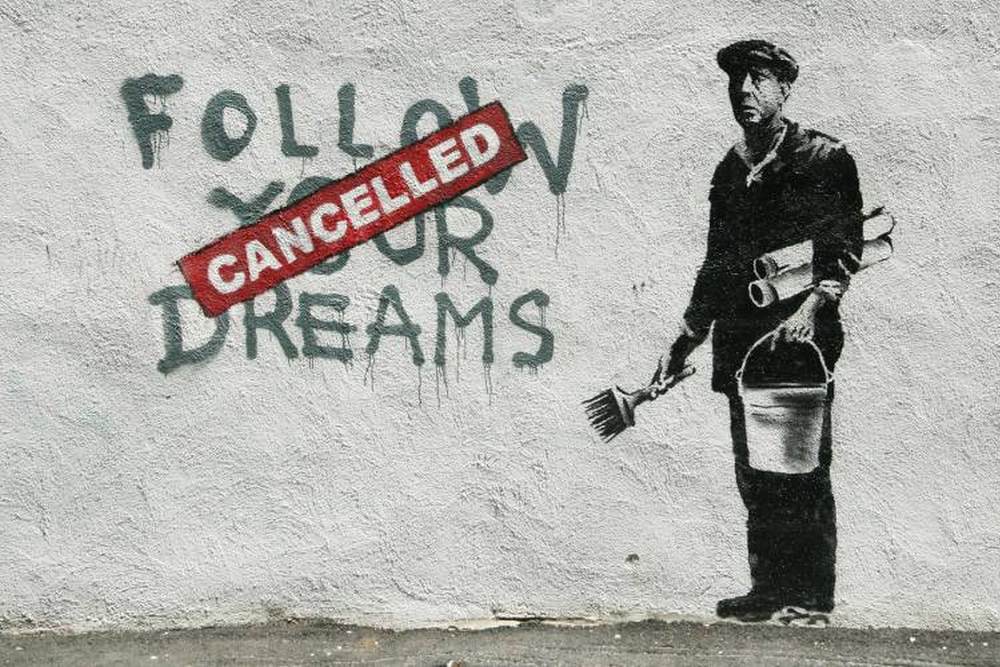 It’s the search for Banksy again. In recent years former public schoolboy Robin Gunningham has been named as the elusive artist, and scientists at Queen Mary University of London analyzing his works believed Gunningham to be 'the only serious suspect'.

Now there is a new twist to the identity of the real Banksy. Craig Williams, a journalist, claims the artist could be Del Naja, or perhaps a team of people led by him and linked to Massive Attack who combine their concerts with graffiti.

Williams has plotted Banksy murals around the world and said that on at least six occasions more than a dozen appeared shortly before or after Massive Attack gigs in the same cities over the past 12 years.

3D was a graffiti artist in the 1980s and has admitted he is friends with Banksy - but the journalist's new research concludes he may be the artist himself.  His band, famous for songs Tear Drop and Unfinished Sympathy, has made millions while Banksy's art sells for at least £500,000 a piece.

Williams has been quoted, saying, "But what if Banksy isn't the one person everyone thinks he is. What if Banksy is a group of people who have stencilling different locations both at home and abroad?"

A rumour exists from 2010 that his work that went up around North America was his work but were not necessarily painted by him, but rather by a street team that happened to be following the Massive Attack tour. And on analysis of his North American work, this makes perfect sense.

Coincidentally, Banksy became famous in the 1990s and at a similar time Massive Attack was releasing its seminal albums Blue Lines and Mezzanine with band member Robert Del Naja known as the first graffiti artist in Bristol.

According to Craig's investigation six Banksy murals were reported in San Francisco on May 1, 2010 after Massive Attack performed a two-night stint in the city on April 25 and 27.

Massive Attack played in Toronto a week later before more new Banksy murals were reported there. He has listed similar patterns in other cities too.

Del Naja also appeared in Banksy's Exit Through The Gift Shop speaking about the pair's friendship from his early days in the city.

It would lead to further revelations if his works appear around the time of Massive Attacks next gig. But, while theories continue, will we ever know who the real Banksy is? 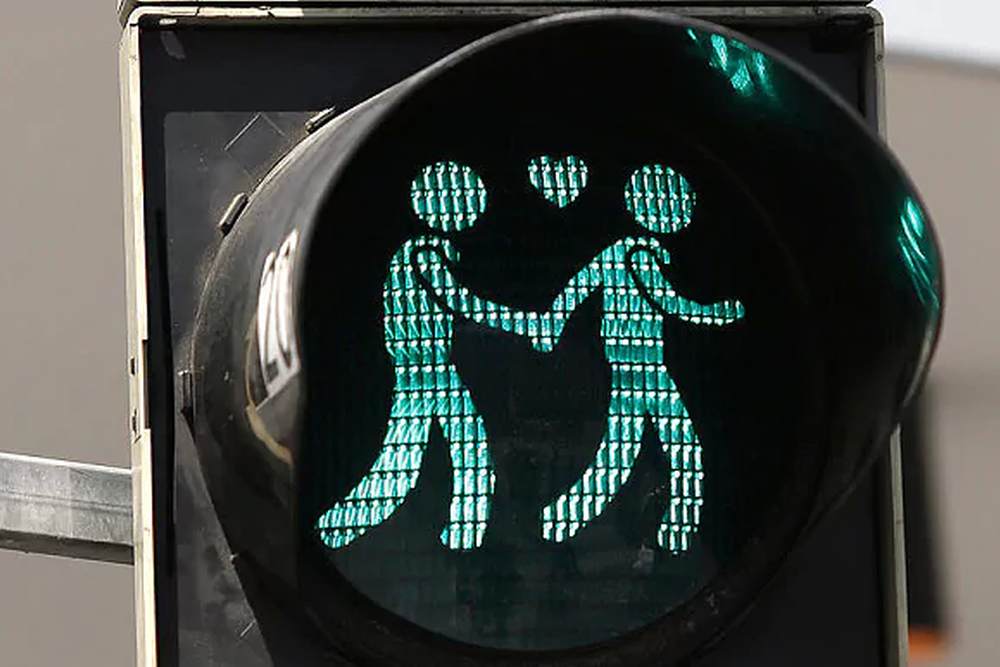 London is seeing a different kind of support towards the capital's LGBT community. Transport For London had replaced the traditional green man sign in 50 traffic signals in June around the Trafalgar Square area. It was seen as a nod to the participants of London Pride.

But they are still there. People often get confused to see the famous green man replaced by same-sex symbols and are unsure where to go when they cross the road as the gender symbols look like arrows. One tourist wanted to know if the sign meant that women have to walk on one side and men on the other. Another man said when the light was green and it showed two women, he thought his wife and daughter could cross, not him.

Weird confusions may be going through some people’s minds but not everyone is confused and the scheme has had a lot of praise. A twitter user tweeted: 'The traffic lights in London are still in pride theme and it's the greatest thing ever.'

Last year a similar scheme was introduced in host city Vienna during the Eurovision Song Contest.

While getting ready for a job interview people do different things like rehearsing answers, dressing smartly, learning more about the company, but now it seems women can win that role by losing weight.

Weight-based prejudice in the workplace has become so obvious that those who are as little as a pound heavier than their rivals are at a disadvantage.

Research has found that even women with their BMI in the healthy range are penalised for their figures. And the prejudice is prevalent as much in women bosses as men.

Professor Dennis Nickson, of University of Strathclyde Business School – who led the study – said the findings were ‘deeply unsettling’.

The report come days after Bruce Hurwitz, a leading recruiter in New York suggested women should ditch their engagement rings if they want to secure a job because men who see a fancy ring will assume the woman to be ‘high maintenance’.

During the study, researchers asked 120 men and women to rate eight pictures of women for their suitability for jobs working with the public, such as in a shop or in a restaurant or office. They found that the sex of the respondent was not significant in any of these evaluations. "Women respondents in our study were equally likely to rate 'heavy but healthy' female job applicants just as negatively as the male respondents. The main conclusion of this paper is that women within the normal BMI range appear to suffer greater weight-based bias than men who are overtly overweight. This research speaks to the challenges that women (and to a lesser extent men) face in what appears to be a highly 'weight-conscious' labour market." Sad, but a true reality of our times.