Why Hillary Clinton Would Be Good For India 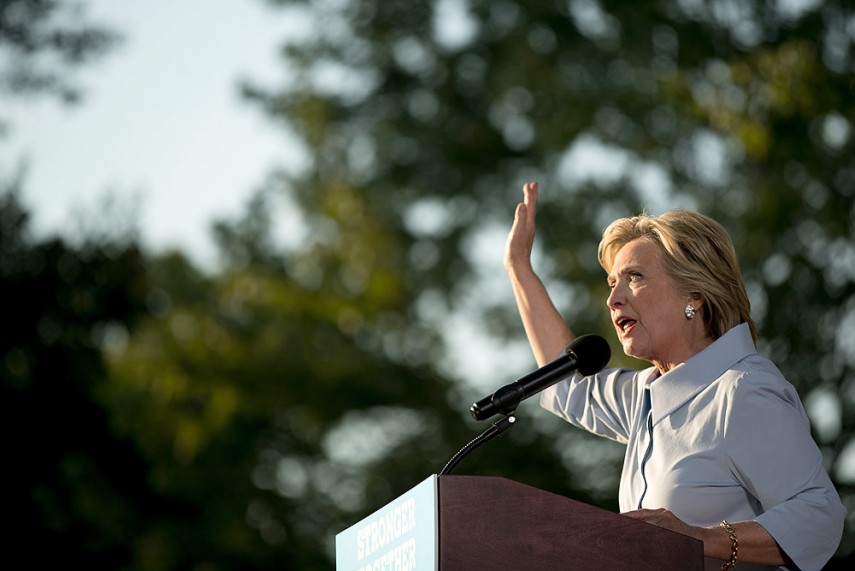 If the latest polls survey is any indication of the political dynamics, the people of the United States may create history by electing the Democratic Party's presidential candidate Hillary Clinton as their first woman President. This is evident from the fact that she continues to have significant edge over Donald Trump. The revelation of Donald Trump having perhaps avoided paying taxes for 18 years and the appearance of a 2005 tap containing his obscene comments about women can further adversely impact his prospect of entering into the White House as the 46th US President.

Indeed, domestic issues including the economic slowdown, increasing unemployment, health care, social security and others have been the main focus of the election campaigns of both the presidential candidates. It is also true that foreign policy affairs have equally assumed huge importance in the US presidential campaign. In fact, people within and outside the US have been curious to know about how Hillary Clinton and Donald Trump, if elected, would deal with the burning international issues like China's assertive behaviour in the South China Sea and beyond, the crisis in Syria and Ukraine, the menace of the terrorist organisation ISIS and others.

India is also closely observing the US presidential election to understand how the bilateral ties between the two countries would progress under the new Administration. In turn, Indian strategist, experts and of course, common people are engaged debating who would be the better President as far as India is concerned — Hillary Clinton or Donald Trump. Consequently, there is an increasing feeling that under the Trump's administration New Delhi and Washington may face obstacles in sustaining the momentum gained in their bilateral ties over the last two years. Undoubtedly, there are some convincing reasons for making this assessment. One factor that casts dark clouds over the future of India-US ties under the Trump administration is his announcement of initiating a tough immigration policy and hiking the minimum wage paid to the H1B visa holders, if elected the President. This in turn would not only reduce the prospect of job opportunities for skilled Indian workers, but there would also be a sharp decline in remittances that India receives from its non-resident people in the US. This in turn would have an adverse impact on the Indian economy.

Trump's saying that Muslims should be banned from entering the US has also set off alarm bells ringing in India, which has the second largest Muslim population in the world. Though sections of Hindu nationalists have expressed their consonance with Trump's view, the fact remains that the secular character of Indian democracy does not allow the Indian government to share Trump's degrading view about the Muslim community. This is possibly the reason that while replying to a question to this particular issue in the US, India Defence Minister Manohar Parrikar said, "we don't look towards communities with suspicion."

Further, except calling Pakistan "probably the most dangerous country in the world" because of its nuclear weapons, he has not outlined his approach towards South Asia. Added to this is Trump's comment that the US should not automatically come to the defence of its NATO allies if they are attacked has started off a debate about a possible shift in US's security thinking under the Trump administration. Of course, at a time when India and the US are trying to develop a strong relationship with Japan, Australia and other like-minded countries to contain China's assertive behaviour, Trump's election as the President may adversely impact this process. In addition, as Donald Trump does not have the experience of working at any level in the US administration, his ideas and capabilities on many issues including foreign policy are yet to be tested.

On the other hand, Hillary Clinton enjoys personal bonhomie with India, the genesis of which was in 1995 when she visited India as a part of her twelve-day trip to South Asia. It is believed that she played a crucial role in persuading her husband Bill Clinton to revive the India-US relationship, which had hit the lowest point, following the 1998 nuclear tests by India. She co-haired the Senate India Caucus and supported the India-US Civil Nuclear Agreement. During her tenure as the US Secretary of State (2009-2013), she further consolidated the deepening engagement between the two countries. Her contribution is greatly recognised in facilitating cooperation between the two countries in the field of high technology, defence and in establishing the strategic dialogue in July 2009. She played an important role in strengthening ties with New Delhi under President Obama's rebalancing American policy to Asia. Her speech in Chennai in 2011 was viewed as a historic moment in the bilateral ties between the two countries, where she said that "the time has come for India to lead… Much of the history of the 21st century will be written in Asia which, in turn, will be influenced by the partnership between the US and India and its relationship with neighbours.”"

She also said that India should "not just look east, but engage east and act east"— to emerge and consolidate its position as an Asian power. Her strong stand against Pakistan for its dismal performance in eliminating terrorist heavens from its soil continues to have its impact on the minds of Indian people. One can imagine the closeness between India and Hillary Clinton from the fact that Donald Trump has alleged that she has received funds from Indian leaders. Hillary Clinton enjoys good reputation among sections of the India-American community, which is the third largest ethnic group among Asians in the US, with a population of about 3.2 million. Unlike Donald Trump, Hillary Clinton has recognised what the US has garnered from its outsourcing policy. In turn, it can be hoped that during her stint as President, the US would take necessary steps to ease the process of the H1B visas application for Indians. In fact, her election campaign chief John Podesa has said that Hillary Clinton will take relations with India to a new level and better economic strategic ties will help anchor the US in the region. More importantly, Hillary Clinton's becoming the US president would ensure the continuity of the upward momentum in the relationship between the two countries, enabling India and the US to further expand cooperation in several areas of their common interests including economy, security, counter-terrorism, climate change and others.

Sumit Kumar Jha has submitted his PhD thesis on the India-US Strategic Partnership: Foundation, Dimensions and Limitations (1980-2008) to Pondicherry Central University and is a guest expert at Middle East Institute, Washington D.C.