Who Speaks For Muslims?

The recent setting up of three parallel Muslim Personal Law Boards has caused a considerable flutter, but who has the right to speak for or about Islam and, in particular, for Muslim women's legal status, remains to be seen. 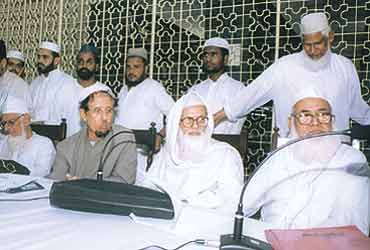 The recent setting up of three parallel Muslim Personal Law Boards, by sections of the Barelvis, Shias and some Muslim women respectively, has caused a considerable flutter in Indian Muslim circles. This has been widely commented on in both the Muslim as well as the mainstream Indian press.

Some traditionalist ulama and Islamist ideologues have reacted to the setting up of parallel boards by denouncing them as alleged ploys by the ‘enemies of Islam’. This, of course, is their standard technique of stamping out dissent, explanations for challenges to their authority being typically framed a conspiratorial mode. Others have welcomed these developments, arguing that the AIMPLB had been reduced to a conservative, largely Deobandi, institution, that was insensitive to the concerns of other Muslim sects as well as for Muslim women.

The infighting within the All-Indian Muslim Personal Board (AIMPLB) had been gathering momentum for some time now, with some members, such as the noted Shia scholar Maulana Kalbe Sadiq, increasingly  voicing their criticism of conservatives in the board for their vehement opposition to legal reform. To add to this was the forceful critique of the Board by several Barelvi and Shia ulama, who argued that the Board had become a virtual monopoly of their Deobandi arch-rivals. Finally, as the setting up of a women’s Muslim Personal Law Board suggests, at least some Muslim women managed to garner the courage to take on the Board for its perceived hostility to women’s concerns.

That the irreconcilable contradictions of sect and gender should have finally succeeded in dividing the Board should come as no surprise. It underlines the fact that the Muslims of India, like their Hindu counterparts, are hardly a homogenous community. The notion of a seamless Muslim monolith, equally dear to radical Islamists as well as unrelenting Islamophobes, has actually no basis in reality.

Muslims are fiercely divided on the basis of sect or maslak, and each maslak thinks of itself as the sole ‘true’ Muslim community, faithfully following in the path of the Prophet. Consequently, all other maslaks are dismissed as ‘aberrant’, if not totally out of the pale of Islam. The deep-rooted sectarianism within the larger Muslim community seems to have proved too doggedly resistant to the efforts by the Board to present a united Muslim front or maintain a sense of Muslim unity. This explains why sections of the Barelvi and Shia ulama have now decided to set up their own personal law boards, arguing that the AIMPLB, being Deobandi-dominated, is unwilling to listen to their concerns.

The Board’s inability to address the sectarian question, which has led to the split in its ranks, reflects the fact that, by and large, the traditionalist ulama have been consistently indifferent, if not plainly hostile, to genuine dialogue between the representatives of different maslaks.

It is remarkable that while some Muslim groups in India today are engaged in a limited form of dialogue with people of other faiths (often for a missionary purpose), no single Muslim organization is engaged in promoting genuine (as opposed to cosmetic) dialogue between the different Muslim maslaks. At most, appeals are issued from time to time for Muslims, irrespective of maslak, to close their ranks and present a united front against what are routinely denounced as ‘enemies of Islam’. This, of course, in no way, constitutes inter-maslak dialogue in the true sense of the term.

The hostility of large sections of the traditionalist ulama to intra-maslak dialogue has to do, in large measure, with simple mundane bread-and-butter issues. Unlike Catholicism, Islam does not have a church that lays down the official doctrine. This opens the way for diverse, even mutually opposed, interpretations of Islam, each of which purports to represent the single normative Islamic tradition. The ulama of the rival maslaks claim to be the authorities or representatives of the single ‘genuinely’ Islamic sect, and it is on this claim that their authority and influence rests.  This claim is sought to be further bolstered by routine denunciations of rival Muslim sects, amply evident in the writings and fatwas of the ulama, and in the curriculum of the madrasas, each of which is associated with one maslak or the other.

Sectarian rivalries among the traditionalist ulama reflect a fundamental inability to come to terms with the theological ‘other’. Whether it be the non-Muslim ‘other’ or the sectarian Muslim ‘other’, they are all typically seen and defined as ‘enemies’ or ‘deviants’, threatening the purity of the faith, which comes to be reduced to a narrowly defined sectarian vision of Islam. This explains why the ulama in general have shown little or no interest at all in promoting Muslim genuine ecumenism. This also explains why the Board has been unable to solve the sectarian problem within its own ranks that has lead finally to multiple splits in the Board itself.

In addition to the inability of the Board to sensitively handle the sectarian question is the hostility of many of its members to any legal reform that might help mitigate the plight of Muslim women. The setting up of a women’s Muslim Personal Law Board reflects a growing protest on the part of at least some Indian Muslim women against the deeply rooted patriarchal prejudice of the traditionalist ulama, which cuts across sectarian lines. It directly questions the claims of the traditionalist ulama on the Board to speak on behalf of all Muslims, women included.

After all, as many Muslims would themselves stress, the Board is certainly not a representative body. Its members were not elected by the community and, thus, it cannot presume to have the support of the community as a whole. The vast majority of the Muslims have probably never even heard of the Board, although it claims to speak in their name. As the founders of the women’s Personal Law Board probably see it, the traditionalist ulama in the AIMPLB have no right to claim the sole monopoly to interpret Islam. If, as the Qur’an itself insists, religious knowledge is incumbent on all Muslims, men as well as women, there is no reason why Muslim women cannot interpret Islam for themselves, or so these women seem to be arguing.

In all, then, the multiple splits in the Board and the setting up of three parallel personal boards points to a fracturing of the ‘hegemonic consensus’ that brought together the traditionalist ulama across sectarian boundaries. In addition, it suggests a growing challenge to the claims of the traditionalist ulama by ‘ordinary’ Muslims. What this would mean for notions of community leadership, for who has the right to speak for or about Islam and, in particular, for Muslim women’s legal status, remains to be seen.

Yoginder Sikand is the author of Sacred Spaces: Exploring Traditions of Shared Faith in India and Inter-Religious Dialogue and Liberation Theology: Interviews with Indian Theologians and Activists