Who Are The Guilty?

More than 20 years later, while the whole country is outraged at the Congress-led UPA's pathetic ATR on the Nanavati Report, way back then in 1984 itself, a joint inquiry by the PUCL and PUDR had come out with a comprehensive report that has been cal 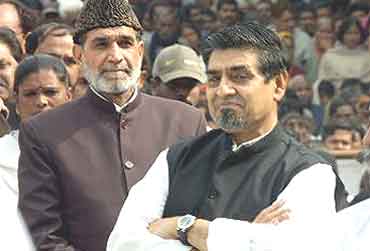 ACKNOWLEDGEMENT
The People's Union For Democratic Rights and the People's Union For Civil Liberties would like to place on record their gratitude for the valuable information given by the survivors of the carnage at tremendous risk to their lives, the volunteers of Magrik Ekta Manch and many others who by their dedicated work made possible the investigation and publication of this report

A fact-finding team jointly organised by one People's Union for Democratic Rights (PUDR) and people's Union for Civil Liberties (PUCL) in the course of investigations from November 1 to November 10, has come to the conclusion that the attacks on members of the Sikh Community in Delhi and its suburbs during the period, far from being a spontaneous expression of "madness" and of popular "grief and anger" at Mrs. Gandhi's assassination as made out to be by the authorities, were the outcome of a well organised plan marked by acts of both deliberate commissions and omissions by important politicians of the Congress (I) at the top and by authorities in the administration. Although there was indeed popular shock, grief and anger, the violence that followed was the handiwork of a determined group which was inspired by different sentiments altogether.

Experience of individual members of the team as well as their extensive interviews with the (i) victims of the riots (ii) police officers who were expected to suppress the riots, (iii) neighbours of the victims who tried to protect them, (iv) army personnel and v) political leaders, suggest that the attacks on the Sikhs followed a common pattern, whether they took place in Munirka in the South, or Mangolpuri in the West, or Trilokpuri in the east. The uniformity in the sequences of events at every spot in such far-flung places proves beyond doubt that the attack were master minded by some powerful organised groups. As a senior army officer deployed in Delhi during the recent riots said : "This arson is the work of an expert". Newspaper reports suggest that this pattern is similar in all Congress (I) ruled states.

There was also a definite pattern discernible in the choice of the victims made by the assailants. According to the 1971 census figure Sikh males in the age group of 20-50 number approximately , 1,00,000. The Sikhs who were killed in the recent riots largely belonged to this age group. The official estimate of only 325 killed (including 46 Hindus) till November 7 (The Hindustan Times, November 11) sounds ridiculously low compared to the magnitude of arson, lynching and burning alive of people in the resettlement colonies alone. On the bases of information gathered from various sources, including eyewitnesses, survivors and relatives of the dead, the team estimates that the member of those killed is more than a thousand.

From our talks with the victims and their neighbours in almost every riot hit spot, we could reconstruct the sequence of events, which followed a stereotyped pattern everywhere.

The first phase was marked by the floating of a set of rumours on the evening of October 31, following the announcement of Mrs. Gandhi's Death. The rumours were three. First, Sikhs were distributing sweets and lighting lamps to celebrate Mrs. Gandhi's death. (Later during our investigation when we asked the residents of the affected localities whether anyone from among them had actually seen such things, almost everyone admitted that they had not personally witnessed it, but had heard from someone else. We did however come across a few people who while expressing revulsion at the incidents of assaults on the Sikhs, added that they had seen in some places some Sikhs expressing their glee at Mrs. Gandhi's death by demonstrative gestures. We have reports that some isolated groups of non Sikhs also exhibited similar behaviour. From the information that we have gathered from various sources, our impression is that such cases were few and isolated). The Second rumours was that train-loads of hundreds of Hindu dead bodies had arrived at Old Delhi Station from Punjab.Third, water was poisoned by the Sikhs, As for the two latter rumors, we came across evidence of policemen in van touring certain localities and announcing through loudspeakers the arrival of the train and the poisoning of water. In certain areas, we heard that police officials had rung up residents advising them not to drink water. These rumours (the last two were officially repudiated later) contributed to the shaping of a public mind that acquiesced in the attack and murders that took place soon after.

The second phase began with the arrival of groups of armed young people in tempo vans, scooters, motor cycles or trucks from the night of October 31 and morning of November 1 at various places like Munirka, Saket, South Extension, Lajpat Nagar, Bhogal, Jangpura and Ashram in the south and south-east the connaught Circus shopping area in the centre and later the trans Jamuna colonies and resettlement colonies in other areas in the north. With cans of petrol they went round the localities and systematically set fire to Sikh houses, shops and gurudwaras. We were told by the local eye witnesses in all the area we visited, that well know Congress (I) leaders and workers (their names are to be found in Annexure-I) led and directed the arsonists and that local cadres of the Congress (I) identified the Sikh houses and shops. A senior police official who for understandable reasons does not want to be named. Pointed out : "The shop signs are either in Hindi or English. How do you expect the illiterate arsonists to know whether these shops belonged to Hindus or Sikhs. unless they were identified to them by some one .who is either educated or a local person ? " In some areas, like Trilokpuri, Mangolpuri and the trans-Jamuna colonies, the arsonists consisted of Gujjar or Jat farmers from neighbouring villages, and were accompanied by local residents, some of whom again were congress (I) activists. In these areas, we were told, Congress (I) followers of the Bhangi caste (belonging to the scheduled caste community) took part in the looting. In South Delhi, buses of the Delhi Transport Corporation (DTC) were used by the miscreants to move from place to place in their murderous journey. How could the DTC allow the buses to be used by criminals ?

The attacks in the resettlement colonies (e.g. Trilokpuri in the trans-Jamuna area and Mangalpuri in the west, where the maximum number of murders took place, again displayed the same pattern. The targets were primarily young Sikhs. They were dragged out, beaten up and then burnt alive. While old men, women and children were generally allowed to escape, their houses were set on fire after looting of valuables. Documents pertaining to their legal possession of the houses were also burnt. In some area of Mangolpuri we heard from the survivors that even children were not spared. We also came across reports of gang rape of women. The orgy of destruction embraced a variety of property ranging from shops, factories, houses to gurudwaras and schools belonging to the Sikhs. In all the affected spots, a calculated assailants to burn alive the Sikhs on public roads. Even five days after the incidents, on November , in the courses of one our regular visits to Mangolpuri we found that although the ashes had been cleared, the pavement in front of the Congress (I) office was still blotched with burnt patches, which the local people had earlier pointed out to us as spots where four Sikhs were burnt alive.