Where Did Iraq's Weapons Go?

It was a case of generalized misjudgment of the threat and its hyping by the Bush administration, argues the Senior Fellow at the Brookings Institution. 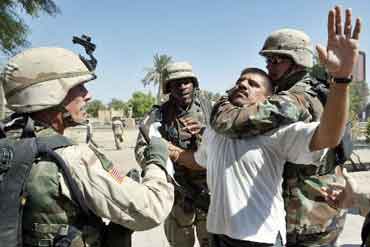 WASHINGTON: American David Kay, head of the Iraq Survey Group in Baghdad, has just reported that despite the $300 million in expenditures and the efforts of many hundreds of individuals working for him, no Iraqi weapons of mass destruction have been found in Iraq. The good news is that this fact makes it less likely that al Qaeda has managed to sneak into that country and obtain some chemical or biological materials for its terroristic purposes. But the bad news is that a war that was already so controversial in much of the world seems to have lost its main rationale.

There are, however, several points to make right away. First, while it is increasingly clear that there was no imminent threat from Iraqi weapons of mass destruction (WMD), Saddam did not do what was demanded of him by the unanimous U.N. Security Council vote on Resolution 1441 last November. His subsequent December declaration made no effort to explain where all the various materials of potential use in chemical or biological programs - and with precious little plausible use for anything else - had gone. We know he imported such materials, primarily in the 1980s, so Saddam did fail to comply even in the event that he had no weapons at that point.

Second, David Kay and his team have uncovered several prohibited activities and materials inside Iraq. They range from vials of biological pathogens to active plans for importing banned missiles to undeclared unmanned aerial vehicles or drones that Saddam was under clear international orders to account for. These things are not workable weapons, to be sure. But even if they are not smoking guns, they are "smoking holsters" - indicating intent to have weapons, or the ability to do so again on short order - and violations just the same.

Third, Saddam still had interest in a nuclear weapons program. Indeed, given his history, we hardly needed inspectors to know this. And if Saddam or his sons someday obtained the ultimate weapon, they might have felt emboldened to again invade Kuwait or another neighbor in the belief that their nukes insulated them from a possible U.S.-led operation to evict Hussein from the occupied country or to overthrow him.

All that said, let's call a spade a spade - Kay's report hurts the Bush administration and the United States. The demonstrable lack of an imminent threat means that, at a minimum, President Bush did not have to be in such a hurry to wage war almost unilaterally last winter. Saddam may not have deserved many more months to come into full compliance with the demands of Resolution 1441, but the opinion of the international community did deserve to be heard - and it was not. As a result, international law has suffered, the legitimacy of the war has been degraded, and the postwar effort is requiring far more troops and money from the United States than it might have otherwise. Most of all, the image of the United States as a fair-minded country that leads in security policy without ignoring the wishes of its friends, allies, and neutral countries has suffered greatly.

In fairness, everyone thought Saddam had chemical and biological arms. The Clinton administration did; most independent analysts like myself did; the UN did; France and other foreign nations skeptical of the need for war also did. It now looks like we all were wrong.

But the Bush administration made three main mistakes, at least some of them deliberate, that went beyond these commonly shared errors. First, the White House suggested a more imminent chemical/biological threat than the evidence warranted. Here in the US, there was much talk of unmanned aircraft being used to disseminate agents; in Britain, the Blair government (with US support) made its famous allegation that Iraq could deliver such weapons of mass destruction on the battlefield within 45 minutes of a decision to do so. Second, the Bush administration exaggerated the state of Iraq's nuclear program. It took questionable evidence about Iraq pursuing - and probably failing to obtain - materials that would be needed even to begin to set up a nuclear program. This was used it to back up lines like that of Vice President Cheney, who claimed that Saddam had "reconstituted his nuclear weapons." Third, the Bush administration continued to exaggerate (even if it did not totally manufacture) evidence about possible links between Saddam and al Qaeda - even insinuating that Saddam may have had a hand in 9/11. If that was the case, even small stockpiles of chemical or biological arms in Iraqi hands would take on far greater and more immediate strategic significance than previously believed.

On these three points, the Bush administration was wrong and misleading - if not necessarily deceitful. The evidence to contradict its arguments was available in unclassified form during the course of last fall's and winter's debates, and a number of us, who tried to refute the worst of the misleading allegations, made use of it. By contrast, there was what increasingly appears to have been a broad analytical failure in the US and abroad about the state of Saddam's chemical and biological weapons programs.

Why then did Saddam not bother to correct us? If even those who wished to avoid war had a misperception about his chemical and biological arms, why did Saddam not come clean, owning up to where he had destroyed such arms so that soil samples and paper documents and testimony from his scientists could verify the claims?

Several theories have been advanced about this, most recently by former chief UN inspector Hans Blix who posits that perhaps Saddam wanted the deterrence associated with the world's fear of his weapons of mass destruction. That may be right. I tend to think, however, that Saddam had spent so long defying the international community and the United States on his WMD stockpiles that his own pique clouded his judgment, and he simply made a strategic miscalculation. Wishing to continue to defy the US, he assumed that the opposition to war of France, Germany, Russia and others - together with what he still may have mistakenly assumed was an American unwillingness to risk major casualties in urban warfare - would save his hide.

But this is all speculation. What is not speculation are the two central points. One, Mr. Bush's critics should remember that most of them shared in this administration's assessment about Saddam's chemical and biological arms, meaning we were all wrong together. A combination of Saddam's history in using such arms, his history of hiding such arms, various defector reports, and his inventories of materials usable only to make such arms all seemed to point in the same direction. Yet in retrospect, that may have been exactly the wrong direction to take analytically. So on this point Mr. Bush deserves a break. But second, the Bush team does not deserve a break for its consistent and thus almost certainly intentional efforts to stretch other evidence. The hyping of Iraq's progress towards nuclear arms and its possible ties to al Qaeda contributed to the sense of urgency Mr. Bush used to justify a war and postwar operation that, had they been delayed only another month, could probably have been waged with far more international legitimacy and assistance.

Michael O'Hanlon is Senior Fellow at the Brookings Institution. Rights: © 2003 Yale Center for the Study of Globalization. YaleGlobal
For in-depth, objective and more importantly balanced journalism, Click here to subscribe to Outlook Magazine