When The Swing Stopped 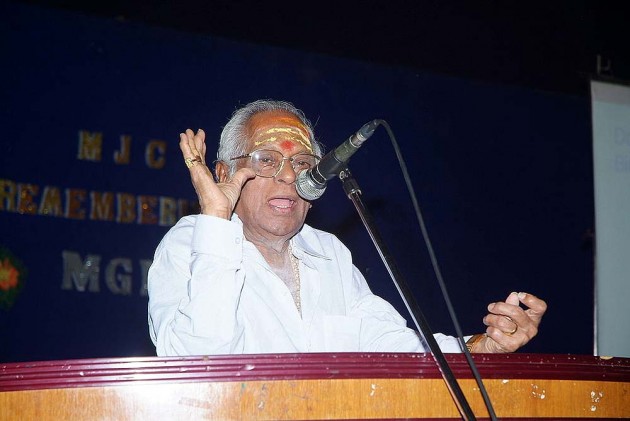 With a lack of an independent popular music industry there birthed a genre --? light music -- ?that remains unique to India even today?. This was before fusion days of the 1970s and 80s. Light music (literally mel isai in Tamil) was not classical Indian music. It was melodic, rhythmic, encompassing a healthy fusion of south Indian folk beats and ditties and classical bits. From across the seas, light music added elements of swing, blues, rock and roll, disco to orchestration, choric singing and  set to robust Tamil rendition by playback singers for the movies.

Back then in the 60s in Madras radio was big. The songs were easy on the ear and melodic compositions and there were no generational wars over Appas and sons when an MSV song played in the drawing room.

For an entire generation of post-Independence and 60s Tamils MSV’s songs marked their growing milestones, from the first flush or romance to serenading crooning numbers, philosophical and spiritual songs and toe tapping numbers.

The duo that produced such music was Viswanathan and Ramamoorthy and today we mourn the passing of the last member of the duo, Viswanathan.

Manayangath Subramanian Viswanathan, born to a poor Tamil family in a hamlet in Kerala, suffered abject poverty.  Having lost his father early on, he had confessed to contemplating suicide as a boy. He had no musical training at home but had an ear for music. He eked a living doing odd jobs in the upcoming film studios and music departments of then Madras, which was a hub for movie making in south India. In his teens the self-taught Viswanathan could play the harmonium, the keyboard and piano and nurtured dreams of being an actor-singer like many top heroes of the time.

Viswanathan began composing music for Tamil films in the 1950s with a fellow violinist Ramamoorthy. They are credited with some fabulous chart-busting music in Tamil and Telugu films before they parted ways.

Viswanathan continued even after the split to retain his popularity and has over 1?,?700 films in south India. He was credited with introducing a whole range of singers who gained popularity and even the following generation like Illaiyaraja and AR Rahman had cut their teeth in his musical troupe.

He was conferred the title of King of Light Music and it seemed fitting given the popularity and range of music the duo produced.

Viswanathan’s personality was larger than life. He was a performer himself, loved his singing parts in movies and had a giant laugh. His music, like the man himself, was a celebration of life.

Of Absence and Loss: Verses by Aditya Tiwari