When I Was Shipwrecked In Paradise

A sad but glorious end to what was supposed to have been a ten-day cruise.

More from Prabhu Ghate
View All

When I first visited Palawan, the north-south highway was a deeply rutted dirt road, and rather than bumping along, squeezed knee-to-knee inside a jeepney, it was more comfortable to shoot the breeze and admire the views sitting on the roof. In fact, it was much easier to get around those days by boat. In Puerto Princessa I met Mark, a German expat married to a Filipina. Mark had just converted a fishing boat into a live-aboard called the Moonshadow, and was offering a ten-day cruise up the east coast of Palawan. I joined one of them with my friend, Ali Azimi, an Afghan American, with his wife Khaleda and their two children.

As we set off, weaving in and out of the islands, we would stop to snorkel off empty beaches, or to drop by on Mark's many friends, who lived on islands on the way. Pierre and Rosemarie owned Paradise Island, where they ran a poor man's resort. They lived a Robinson Crusoe life but served spectacular seafood. They were very well travelled. Pierre knew for instance that the place to go to was not Goa, which was too crowded, but Gokarna further south in Karnataka. You don't have to be a millionaire to own an island in the Philippines; it is a bit like owning a farm in Chattarpur in Delhi. When their kids, who were all born on the island, had to go to school, Pierre and Rosemarie sold out, and now run a hotel in Puerto. Paradise Island is still French-owned, but has now gone up-market. One of its attractions is a visit to a very high-tech pearl farm run by the same company.

On the fourth day of our cruise, we rounded the northern tip of Palawan and started sailing down the western side to reach El Nido. Mark decided to moor off one of the outer islands in a bay opening on to the South China Sea. In the early hours of the morning I was woken up by a loud thud and a heavy shuddering of the boat. Mark and his two crewmen were shouting to each other and running up and down the deck with poles they kept prodding into the water. I must have been dreaming about pirates because in my stupor I first thought we had been attacked by pirates, who Mark and his crew were trying to fend off with their poles. Grabbing the only weapon at hand, an empty beer bottle, I clambered out of my bunk to join them, to realize that the trouble was something else. We had slipped our anchor and were being hammered against the reef by the swell of the rising tide coming in from the sea. Mark and his crew were using the poles to try to push us off the reef, but try as hard as they could, they couldn't even soften the blows of the swell as it banged us against the rocks. Then someone shouted that water was coming into the hull, which had sprung a leak. Led by Khaleda, we formed a chain gang to pass buckets of water up the steps, but it soon became clear that we were losing the battle, the water was coming in too fast. Assuming we would have to abandon ship and swim ashore, I went back to my cabin and rummaged through my backpack for my address book, the one thing I most wanted to save, and with a bottle of water climbed on to the highest point of the boat to try to keep dry as long as I could. Then, luckily, the buffeting began to subside, and weighed down by the water in the hull, the boat began to settle on the reef. At this point Mark, overcome by exhaustion, emotional as much as physical, sat down on the deck and cried like a baby. The boat was uninsured, and he had lost his life's savings. 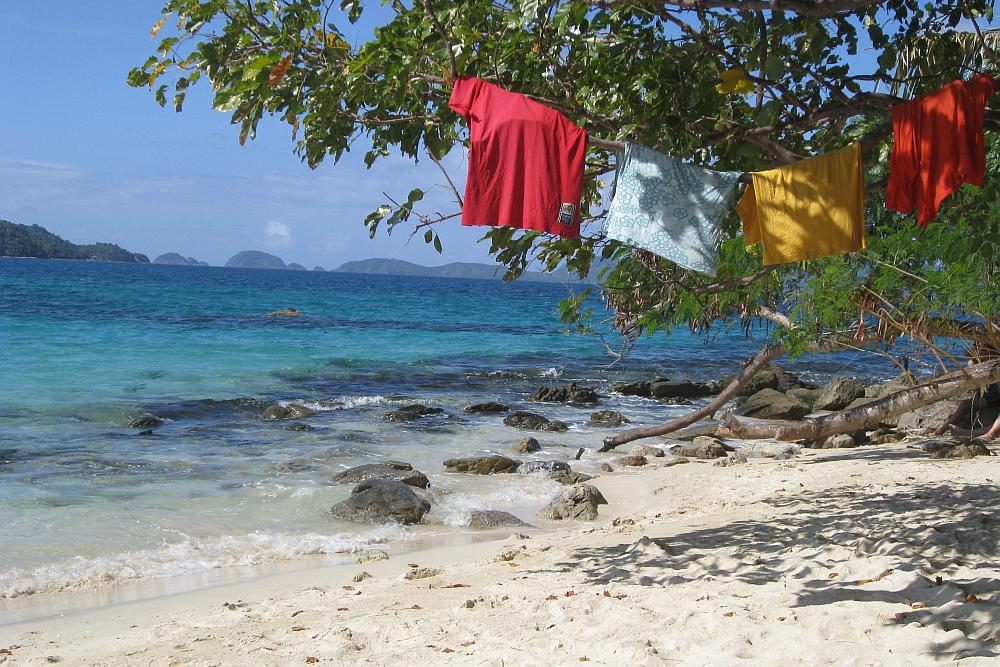 The day was breaking to reveal we were not far from a beautiful beach. Mark couldn't have chosen a better place to get shipwrecked. There was nothing more to do except jump into the swirling waters and try to retrieve the dive suits and buoyancy jackets and other diving equipment that had been washed off the deck and was floating around us. Mark's young son Miguel had jumped in too. His father must have told him to be brave. He turned to me in the water and said "Praboo, its not easy to be brave, is it?" We spent most of the day ferrying our stuff to the beach on a couple of fishing boats that had noticed us and come to help. We had plenty of food, and we camped under the stars that night. It was a sad but glorious end to what was supposed to have been a ten-day cruise. Mark, incidentally, is back on his feet again, and now operates Moonshadow II.

We moved on to Nadulao island (name changed) the next day, into cottages built on stilts on the water's edge, so that at high tide you had to jump quite far to land on dry sand. The beach was owned by a tall blonde Australian woman, who walked around barefoot in a swimsuit all day. When Sheila (not her real name) came to the Philippines, she advertised in the papers for a Filipino husband. She selected one of the applicants, Mr. Cruz, married him, and became a Filipino citizen, which allowed her to buy her stretch of beach. She then divorced Mr. Cruz and packed him off to Australia, a happy man, an Australian citizen. A genteel hippy, she now specializes in offering her guests health foods and nature cures. Her crescent-shaped beach nestles against limestone cliffs whitened by droppings from swallows nest, and looks out onto another island, Pinabuuyutan, which rises like a barrel out of the water, about two kilometers away. Ali and I would swim across to it in the mornings, dodging the jelly fish, while Sheila came over by boat with our breakfast. Pinabuuyutan made it to the cover page of the Lonely Planet a few editions ago. Joanne wanted me to make a little investment and help her build another hut. I wish I could have.