When B&W Art Images Curiously Deck Up The Colourful Ambience

Two of India’s top visual artistes have come together to gift viewers with a rare synergy of paintings and photographs along the same walls. A look at an ongoing Delhi exhibition of select works by Aruna Vasudev and Achal Kumar: 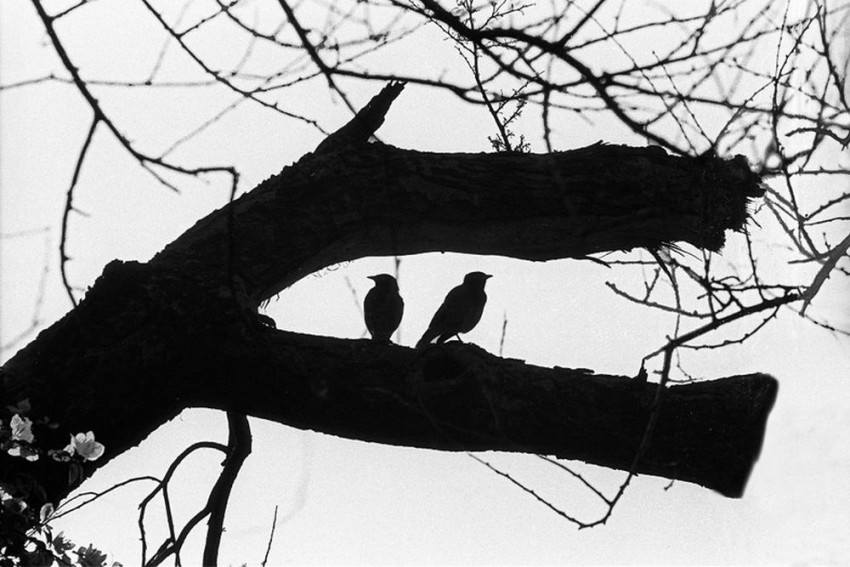 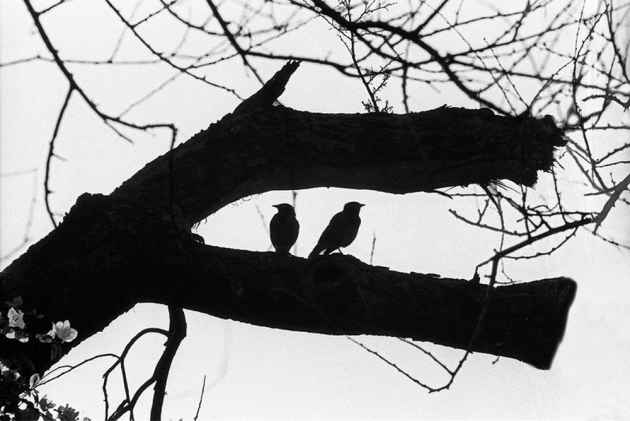 Amid the manicured greenery of the summery locale are on display two strands of visual art: paintings and photographs. Coexisting in harmony, they contrast with the immediate surroundings. For, the exhibition hosts black-and-white works alone.

So, Aruna Vasudev’s brushstrokes portray, say, a mountainous scene featuring coniferous trees at the start leading to still thicker lines of vegetation before hitting snow-capped peaks idling under a cloud-lined sun—giving a particularly soothing effect to the viewer standing against the wall in the gallery down the plains at Delhi, where temperatures are high and the air is dusty. No different is the degree of pleasure while watching Achal Kumar’s camera having captured a misty sight in high altitudes. 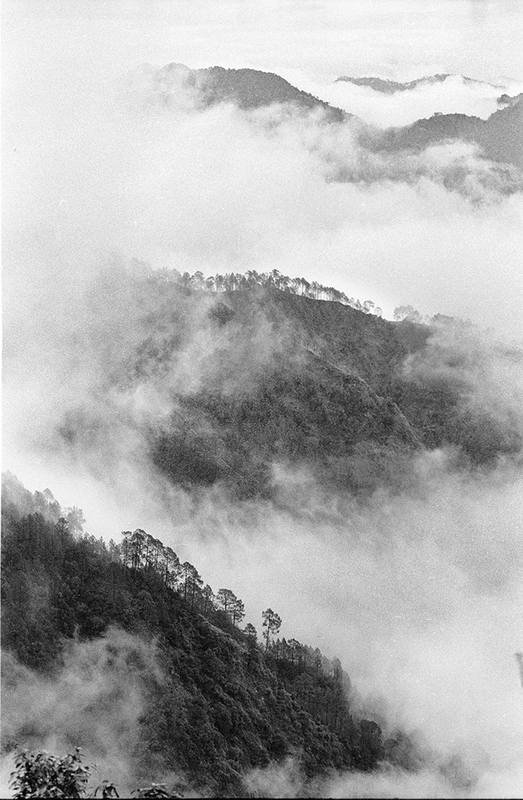 These are just two vignettes from a week-long event that is on in the national capital. Organised by Art Konsult at the India Habitat Centre (IHC) on downtown Lodhi Road, the April 18-24 ‘Landscape’ showcases select paintings by veteran Arunaand photos by Achal.As the hosts rightly describe it crisply, the visitors are taken down a pair of “monochromatic journeys with a brush and a camera”.

Take, say, the case of an Achal image that has two birds perched on a sturdy branch of a tree. Above the two beings is another leafless but thick offshoot going parallel, thus giving a fantasy impression that the birds are perhaps stuck between the predatory jaws of a hungry giant. But for a few bunches of flowers to the bottom left, the entire frame is silhouetted against a gloomy sky.

Virtually giving this visual another interpretation is an Aruna painting that has more branches, think and relatively brittle, with tiny leaves hanging in patterned beauty. Here too, a branch is occupied by what can look like birds in a pair or more, but then there is no touch of threatening countenance—deliberate or otherwise.

The landscape paintings have an unmistakable Oriental touch, about which octogenarian Aruna does give a brief note. “In Japanese, it is called Sumi-e,” the 82-year-old says, inviting attention to the genre well known in East Asian countries, including China, Korea and Vietnam besides Japan. Obviously, Aruna’s aesthetics have the backing of her interactions with an allied visual art like cinema: she studied film and received a PhD in Paris, before launching the Asian film quarterly Cinemaya back in her country in 1988. Subsequently, Aruna founded NETPAC and Cinefan—the Festival of Asian Cinema in Delhi. 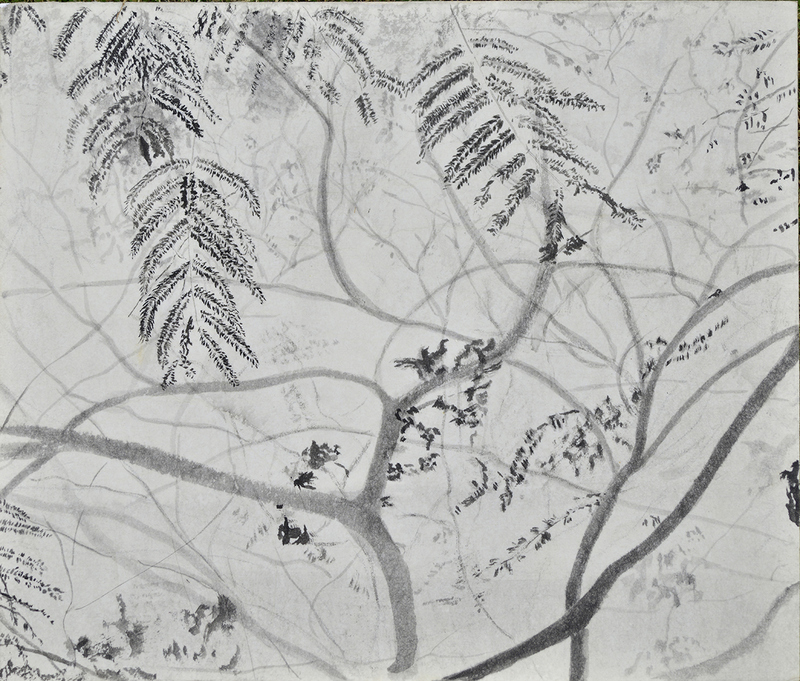 Actually, it is her exposure to Asian cinema that brought her close to the traditional East Asian schools of sumi-e and shan/shui painting. In those, the artist found a natural corollary to both Haiku and Zen philosophy that always fascinated her. Aruna went on to undertake intensive study with contemporary masters in Korea, China and Japan, gaining a meditative process to her ways of painting nature—right from grinding and applying ink to the brush and then painting on delicate rice paper.

If her works now on display at IHC are the result of a personal exploration of the interior and exterior landscape, they are as well a bridge between the imagined and concrete realms. The quality of them being in black-and-white enhances their appeal, given that the works concentrate on light and shade.

Achal, too, focuses upon the elemental, even as he draws the viewer into multi-dimensional tableaux extending beyond the borders of the lens and frame. “In my early years, I used to go for trekking as well as hiking,” recalls the lensman who has been chronicling the vagaries of flora and fauna throughout northern India. “There the nature bug bit me, and its beauty became my passion for rest of my life.”

Be it branches of trees that appear dark when set against brightness or the wings of birds spanning the latitude of a walkway or a path that appears timeless, mist has been an important element in Achal’s photography. “To me, mist has its own graded depth that tends to gradually blur the background and give a new perspective to ordinary,” he shrugs. “This has been a perfect inspiration for the photographer in me.”

Thus Achal’s frames invariably essay some if not all of these in one go: the mountains in mist, fresh new leaves, the rain clouds, bare branches, sunsets and sunrises, freedom of birds in flight. As for their experiential quality, the photographer also attributes it to his shift to digital printing of late, vis-a-vis his lonely trysts in the conventional darkroom with films, developers and fixers amid light-sensitive photo-papers. “Well, creativity is most important! Digital or analog are just mediums to achieve it,” adds Achal, who is a recipient (1997) of a National Academy Award by Lalit Kala Akademi for his image titled Bend in the Mist. He taught in a couple of prestigious art institutions in the capital and has also freelanced for two leading English newspapers.

Officials with Art Consult, which was founded two decades ago following increasing changes in the country’s art market, inform that 50-odd prints of the works being showcased at the exhibition are being sold (at the price bracket of Rs10,000 and Rs 35,000).

I Am Afraid Many Bad Things Have Started Happening Rather Too Frequently: Javed Akhtar On Kathua Rape Case