Khan sahib will leave behind a legacy of irresponsibility and opportunism, and this will probably be remembered more than his own art. This is what hurts. But does any one care? 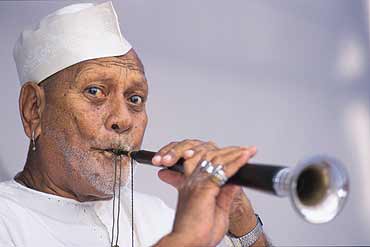 Shehnai maestro and 'Bharat Ratna' Bismillah Khan once again finds himself in the spotlight, but this time its not about music. It is because he has been crying hoarse about his poverty and inability to take care of  his large family.  The 87-year-old Khan's moans began about three months back when he asked for government help citing his illness, and in the process also lambasted Prime Minister Vajpayee for not having kept his promise of allotting a petrol pump to his grandson.

The Prime Minister immediately sent him two lakh rupees, the Uttar Pradesh Chief Minister added another five lakhs and industrial houses came rushing forward with lakhs more. The Punjab Chief Minster, Amarinder Singh, who landed in Delhi on August 8 with a cheque of Rs five lakh for Bismillah Khan, is the latest addition to this list of donors. Roughly, the Bismillah fund can now be estimated at around  25 to 30 lakhs. It is difficult to say how much more it would take to fill his begging bowl.

All this is fine, but this whole episode while making one feel sorry, does raise some important questions. After all, what does Bismillah Khan sahib really want to do? We have been listening to his Shehnai for the past 60-70  years, but not once  does anyone recall him performing without sufficient compensation. Year after year, concert after concert, Bismillah has always been seen on stage with his motley crowd of ten-twelve people. Artistically, Shehnai is very limited, and has traditionally been played on auspicious occasions. On such occasions, it is understandable to have supporting players and the rest of the motley crowd but in a concert of pure classical music, what purpose does this horde (of 14-15 these days has crossed all norms of decency) serve?

The truth is that the artist in Bismillah Khan died long ago. Which is why many in the world of  music were surprised when the government bestowed the 'Bharat Ratna' on him.  My intention here is not to question the rationale of the award, but still it is difficult to resist asking what Bismillah has done to deserve it. He has provided this huge country with not even a single shishya [disciple]. He has three sons, two of whom accompany him on the Shehnai, and the third plays the Tabla. Bismillah knows that none of the three has the potential to sustain himself as an independent artist. And Khan sahib wouldn't have thought of training a disciple from outside his family; and even if he ever did, no sign of any is to be found. What does one make out of this? Bismillah Khan performing on stage with his horde makes for a scene which is at once ludicrous and painful.

Last week he gave a Shehnai performance for MPs in the presence of President Abdul Kalam. The stage was packed with 15 people, among them two Tabla players and one Nakkara player. A certain Soma Ghosh, who is going around proclaiming herself to be Khan sahib's  adopted daughter, was seated right next to him. According to the official announcer, Soma is the last representative of Banaras gayaki [singing style]. The 'spectacle' put up by Bismillah Khan, his three sons and one self- proclaimed adapted daughter made one want to pull one's  hair out. Really, what has happened to Bismillah Khan? Why is he going around the nation with a begging bowl in hand and disgracing other Indian artists? And how much more would fill the bottomless well of his begging bowl? Even today, Khan sahib charges Rs five lakhs for one programme. Why is he doing more and more programmes despite his old age and lost ability to even hit the right notes? The truth is that he should reconcile with reality and retire. That would be suitable for him.

As soon as the government in independent India took upon itself to support artists, politics took over the evaluation process. Only God knows how much our MPs value or love the arts, but every year they nominate their chosen ones and do not seem to give up till the awards or honours are granted. One might wonder what the artists awarded till now have really done for Indian art. Ravishankar has, all  his life, conned the government and the public to make merry in foreign lands. Today, after being awarded 'Bharat Ratna', he seems to be concentrating all his energies on making a starlet out of his daughter Anoushka, though no one seems to know her name in India even now. Amjad Ali Khan can only see possibilities in his sons Aman and Ayan. The nation has done so much for them, aren't we entitled to ask what they have done for the nation?

The time has come when the government, while choosing any artist for any award or felicitation in future, should take into account what that artist has done for the dissemination and development of his art form. Awards and felicitations are given to an artist for his ability to successfully pass the heritage on to the next generation, to keep the heritage alive. But here it seems to be just the reverse. The Bismillah Khan episode is no where near its closure. The way our politicians and industrial houses are falling over each other to fill up Khan sahib's bowl, it seems probable that more will join the queue with bowls in hand.

Khan sahib will leave behind a legacy of irresponsibility and opportunism, and this will probably be remembered more than his own art. This is what hurts. But does any one care?

Driven Out Of Eden