The forecast of a severe thunderstorm for the next four days has put a doubt on whether the match can start at all. 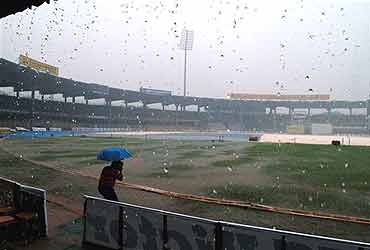 The weather played spoilsport as heavy rains washed out play on the opening day of the first Test between India and Sri Lanka at the Chidambaram Stadium today.

The abandonment meant star batsman Sachin Tendulkar will have to wait for his world record 35th Test century as also former captain Saurav Ganguly who was returning to the national team after being ignored for the one-day series against Sri Lanka and South Africa.

Play was officially called off at 11.30 am but it was was a foregone conclusion once it began to rain in the wee hours.

There was a brief respite in the morning, kindling hopes of a delayed start but the skies opened again at around 9.30 am and the rains did not relent after that.

The sporting public of Chennai had been a disappointed lot after the washout of the one-day international between India and South Africa on Nov 22.

The venue had hosted Sri Lanka's first Test in India in 1982 when the islanders forced Sunil Gavaskar's men to fight for a draw even as the flair of Roy Dias and Duleep Mendis captured the imagination of the cricketing world.

None from the current team, however, has played a Test in Chennai. Coach Tom Moody, though, made his ODI debut as part of the World Cup winning Australian team in 1987 when Allan Border's men clinched a one-run victory off the penultimate ball over Kapil's Devils.

For Indian cricket fans, their wait to see Tendulkar create a world record will continue. Tendulkar has 34 tons to his name, the same as his compatriot and former captain Sunil Gavaskar, and the highest for a player in Tests.

It is also an important game for Ganguly who had a spat with coach Greg Chappell on the tour of Zimbabwe and was subsequently removed as captain.

Selected for just one Test, this is literally a litmus test for the Bengal player who is India's most successful captain.

Also put on hold was the rivalry between Tendulkar and the record-breaking off-spinner Muttiah Muralitharan.

It remains to be seen how lucky the venue would turn out to be for the bowler with 563 wickets in 95 Tests after an ordinary show in the one-day series.