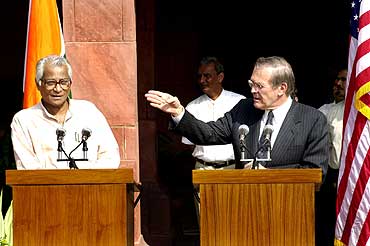 outlookindia.com
-0001-11-30T00:00:00+05:53
Fernandes: Well Secretary Rumsfeld and I had discussions from the time he arrived here. Our discussions were essentially on the strategic relationship between us and on how to continue to build on what we have achieved so far. Naturally we also discussed the ongoing war against terrorism on a global scale, and the kind of developments that we visualize in so far as Afghanistan is concerned. We also discussed some of the specifics on our mutual defence-related partnership, including certain items that we need to acquire, collaborations that we could have, and in other words their relationship of mutual support and collaboration. I'm very happy with the discussions that we had and I want to express my thanks to Secretary Rumsfeld for coming over here -- his first visit as defence secretary to India, and I look forward to a very long lasting relationship between our two nations. Thank you.

Rumsfeld: Thank you very much Mr. Minister. I am very pleased to be back in India, and as you point out on my first visit as secretary of defence. I put great value on the relationship between the United States and India. Our two countries have many common values and common interests, and there I believe important that we strengthen them, so I was particularly pleased to be able to visit with you. I guess that both of us are back in this job for the second time -- to be able to strengthen the military to military and defence ties between our two countries which I think are so important.

The minister has described our visits and the number of topics that we covered, and the only one I would add is humanitarian aspects of our interest in the situation in Afghanistan. Both of our countries have been active in providing humanitarian assistance, and certainly when we have been successful, and there has a post-Taliban government of Afghanistan. I'm sure that both of our countries will again share that interest in providing the kinds of assistance for the Afghan people that they certainly need.

And with that we'd be happy to respond to questions. I should add that I've invited the minister to the United States and I'm hopeful that he would be able to visit us there some time next year at his convenience.

Q: Mr. Secretary, you've just come back from Pakistan. Are you concerned about the safety of nuclear facilities in Pakistan?

Rumsfeld: I think that countries that have nuclear weapons have a healthy respect for power and the lethality of those weapons and the dangers they pose to the world and take the appropriate steps to ensure that they are managed and handled in a way that reflects the dangers that those weapons pose.

Q: Mr. Secretary, (inaudible -- perhaps, "is there a") possibility of Pakistan's nuclear set up, falling into the hands of terrorists or hard-liners. Can you rule out the possibility?

Rumsfeld: As I've indicated, I do not personally believe that there is a risk with respect to the nuclear weapons of countries that have those weapons. I think those countries are careful and respectful of the dangers that they pose and manage their safe handling effectively.

Q: Mr. Secretary, can you tell us what the next steps are in military-to-military cooperation between the U.S. and India? What do you foresee new steps?

Rumsfeld: Well first, Admiral Blair, the commander of our Pacific capabilities is going to be visiting here in the next period of days and weeks. He will be followed by Under Secretary Feith from the Department of Defence who's with me today, the distinguished gentleman with the gray hair there. He will be leading a delegation here and they will be discussing ways that we can establish the linkages between our two countries from the standpoint of military exchanges and training and various educational opportunities, and other aspects of the relationship.

Q: What are the other aspects?

Rumsfeld: Well those are to be discussed by Mr. Feith. You can grab him there afterwards. The two countries will be discussing those intensively. They'll be teams of experts over and they will be decided between the two countries as those visits take place.

Q: Yes, Secretary Rumsfeld, Mr. Fernandes told a German news magazine quoted this morning as saying of our efforts in Afghanistan, "This is a waste of explosives on barren mountains. The most it will do is melt the ice on the peak earlier than usual." Can you respond to that?

Rumsfeld: You bet! What we are doing in Afghanistan is we are engaged in an exercise in self-defence. Thousands of Americans were killed. People from three or four dozen other countries were killed in New York and Washington, people of all races and all religions. It is not possible to defend at every location against every terrorist. The only way to deal with it is to take the battle to them, and that is what we're doing.

We now have some larger number of teams of people on the ground that are assisting with resupply and humanitarian assistance, as well as targeting, and the effectiveness of the bombing is improving every day. I don't think that there probably has ever been a bomb campaign that has been any more attentive and precise and focussed solely on the military capabilities than this one.

Q: Secretary Rumsfeld, another remark that Defence Minister Fernandes had made was that he had his doubts about whether the Americans would have the stick-in-it-power once this phase was over to help India with its struggle against terrorism in Kashmir, particularly with groups that are based in Pakistan?

Rumsfeld: I think the president has been very clear that the effort against terrorism is a doable one. It involves terrorists where they are and certainly he is determined. And I have no doubt in my mind but that the United States will be -- let be start slightly differently. This is much bigger than Afghanistan. The president has said that repeatedly, I've said it repeatedly. Afghanistan happens to be the first problem because the al Qaeda organization is there and it needs to be stopped before it kills thousands of more people. But the president has been unambiguous on that question and there's no doubt in my mind but that we will be pursuing terrorists' networks wherever we find them.

Q: Mr. Secretary, did you discuss the presence of terrorists' camps across the line of control in Pakistan with the defence minister today? And what were your talks about?

Rumsfeld: We talked about terrorism in the broadest sense. We talked about terrorism that has affected both of our countries, and the concern we share, our two countries share with respect to the importance of dealing with that problem. As you know, I have a policy of not characterizing the extent to which other countries are involved in this effort. I feel it's up to them, and I can say the government of India has been very specific and very cooperative and that we certainly appreciate it.

Q: For Mr. Fernandes, there was a reference to your interview to the German publication. Is the government of India, does it agree with the tactics being used in Afghanistan?

Fernandes: Agree with what?

Q: The tactics which are being used in Afghanistan -- the military tactics.

Fernandes: Well I think it's the military men who decide the military tactics. So one should accept what's happening now.

Q: Secretary, there is a thinking that this battle in Afghanistan may continue for four years or at least two years. Do you agree?

Rumsfeld: I think that the effort against terrorism will certainly be a something that we will have to continue over a period of time. We have to be vigilant because in this world of ours there are people who are determined to kill other innocent people, and second in this world of ours with the increasing availability of very powerful weapons and in some cases weapons of vast destruction the risk that they'd fall into terrorists' hands poses a threat that's unique and different in the history of mankind.

Do I think Afghanistan will take years? No, I don't. I think that it is something that is being very aggressively addressed at the present time. How long it will take one can't guess, but certainly all of us would hope it would take the least possible time because the people there pose a threat to innocent people all across the globe. Thank you very much.

Watch Out For Ramzan