'We Talked With A Firm Voice'

The Prime Minister replied to the debate on the Indo-Pak Summit in the Lok Sabha on Tuesday, August 7, 2001 which has resulted in a sharp rebuttal from Pakistan. Full-text of 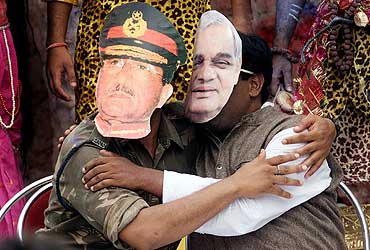 outlookindia.com
-0001-11-30T00:00:00+0553
The discussion was, as such, initiated by Shri Mulayam Singhji who raised certain important points but I would like to kickstart my reply by referring to the speech of Shri Madhavraoji because he spoke in his capacity as the spokesperson of the Congress Party.

According to him the whole nation is confused and the Government is no exception but it seems that he is himself in a dilemma. There may be differences of opinion in so far as the achievement of the purpose of initiating talks is concerned but it is not justified to say that the whole country and the Government was in a dilemma. Everybody is aware of the circumstances under which the talks were held.

It has been said that there was no preparation for the talks. Prior to this talks were held at Lahore which form a very important stage in our bilateral relations. It is a different story that Lahore negotiations landed us in Kargil but there is no need to link the two developments.

Lahore negotiations occupy a very important place in our relations with Pakistan. Terrorism was condemned in the final declaration signed at the end of the negotiations. Pakistan had acceded to it. Though there were certain skirmishes during my Lahore visit but the transfer of power that ensued in Pakistan has changed the whole scenario.

We did not succeed to make the Pakistani delegation agree that the cross-border terrorism should find a mention in the declaration. They went a step forward and termed it as the freedom struggle. This was totally unexpected of them and this is where the atmosphere of negotiations got sullied.

We repeatedly tried to bring home to him that terrorism is no solution to the problems. It is a double-edged weapon. There have been certain incidents of terrorism in Pakistan. General Musharraf has gone to the extent of saying that he wished that he could personally go and shoot the terrorists with his own revolver.

Terrorism is posing a threat to them as well. Therefore, terrorism should not be encouraged in any form. Terrorism can neither be termed as the freedom struggle nor a jehad. But the problem is that our relations with Pakistan have continuously been fluctuating. It has been our determined policy to improve our relations with our neighbours but not from a pedestal of weakness.

Quite surprisingly, some visiting Pakistani journalists were heard as saying that the valley of Kashmir was like a ripe fruit which was likely to fall soon in their lap. That the Indian armed forces were tired of fighting terrorism. I do not know how this misunderstanding was created and how such rumours were floated. May be that such kind of publicity influenced the attitude of the President of Pakistan.

There should be no misunderstanding in anybody's mind. India is a strong country and our armed forces are fully prepared to meet any kind of internal challenge and external aggression. They are mistaken. If they had formulated their policy and strategy on the basis of this misinformation, then, they were destined to fail the negotiations. We do outrightly reject terrorism. Jammu and Kashmir is an inseparable part of India.

For General Musharraf, Jammu and Kashmir may have no other significance but that of a piece of land. He hardly talked of Jammu, omitted Laddakh and focused on Kashmir and Kashmir alone. He said that there was no scope for the improvement of bilateral relations unless the problem of Kashmir is addressed.

We firmly told the Pakistani delegation that if they insist on the centrality of the Kashmir issue, then we shall be constrained to turn the pages of the history of Jammu and Kashmir and pinpoint the facts as to how Pakistan launched the tribal invasion and tried to hinder the accession of the state to India against the wishes of the people of Jammu and Kashmir.

I was astonished to hear from him that if they would not have launched the tribal invasion, they could not have secured the part of Kashmir lying under their occupation today. So, where was the basis of negotiations?

We offered them an agenda for talks twice. We also declared unilateral confidence building measures. We said that we were ready to talk but the issue of Kashmir was an intricate one. The manner in which a naked dance of terrorism is being perpetrated and killings of innocent people resorted to, is no freedom struggle and under these circumstances it is very difficult to proceed ahead.

I hope that Pakistan will reconsider its approach and bring about a change in its perception. We will, on our part ceaselessly strive to bring peace. Friendly relations with our neighbouring countries is a matter of firm resolution for me.

Pakistan has, from the very outset been trying to grab Kashmir by force. After perceiving that it was impossible for her to win Kashmir by force, it adopted the tactics of proxy war and encouraged terrorism. But these machinations will not make Pakistan succeed in its objective.

If we have to fight, it is the poverty, disease and unemployment we should fight against. The whole world has made strides on the developmental front and we have been bogged down in such a messy struggle which does not seem to get solved in near future.

Shrimati Gandhi had asked me to keep in mind the Simla and Lahore Agreements during my talks with General Musharraf. But he had no taste for Simla and it, probably, developed a bad taste in his mind. He was interested in shredding the Simla and Lahore pacts and start afresh. It was his endeavour that Simla and Lahore do not find a mention in the final declaration. We did not accept this.

President Musharraf said in Delhi that the issue of Kashmir cannot be settled by a war. But he failed to simultaneously add that they have devised a new way of laying their hands on Kashmir by way of short of war measures. I found that he was least interested in any issue other than Kashmir.

During the discussion here a point was raised that why did not we call off the talks once Pakistan was not ready to adhere to the agenda. Negotiations are not initiated and withdrawn like that. Besides, during the all party meeting nobody expressed the opinion that the talks should be suspended if they do not agree to the agenda.

Still we have developed a consensus on certain issues and we will continue to talk but from a firm and strong pedestal keeping in view the unity and security of the country. I am grateful to the hon. Members for their support extended to me during the all party meeting prior to the talks but the unanimity of opinion expressed then has changed today and it is perhaps because an element of politics has creeped in as elections are around the corner now.

We shall have to build consensus on the question of Kashmir. We have no difference of opinion in so far as the national unity and security is concerned.

It would not have served any purpose to hold official level talks. It was necessary to ascertain the mindset of the person who was holding the reigns of power in Pakistan. He had come here with a one-point agenda and wanted to start afresh from Agra itself. I insisted that this process was set in motion at Tashkent.

We never entered into negotiations with an element of fear nor did we go in for media blitz. Terrorism is again raising its ugly head. Can the recent incident in Doda be termed as a freedom struggle? I think that Pakistan can check put these activities if it so wishes and, to my mind, it should check these incidents.

We are in favour of friendly relation and it is a litmus test for that. I said to General Musharraf that if he insisted on centrality of the Kashmir issue, we will be forced to go into the pages of history and see how one third of Kashmir was illegally occupied by Pakistan and how a part of it was gifted to China and that there was no democracy in the occupied Kashmir.

On his insistence on the wishes of the people of Kashmir, I asked him whether he had sought the opinion of the people of Pakistan before he took over the reigns of power. He did not expect such a frank and straight forward talk. It was good that such talks were held in a congenial atmosphere.

Now, you may ask as to how it was possible? Everything is possible in diplomacy and we will endeavour to make possible what looks impossible. We will strive to improve our relations with Pakistan without compromising our interests. We enjoy the support of the international community in this.

The President of Pakistan had himself offered to talk anywhere, anytime and any place. There was also an indigenous demand for talks. The smaller countries were saying that since India was emerging as a great power, that is why it was adamant on not holding the talks. But the atmosphere was not favourable for talks immediately after Kargil.

The problem of Kashmir is not easy to handle. It is associated with our sentiments. We do not accept the two nation theory on the basis of which Pakistan was created. But since Pakistan is there, we wish them to progress whereas Pakistan is trying to dismember India. We will never let them succeed.

The Constituent Assembly had taken a decision on Kashmir. The voice of the people of occupied Kashmir is gagged. Elections were held there recently but later the power was handed over to an Army General. By whose authority did Pakistan gift a part of Kashmir to China?

We were told that if we reached a bilateral accord, they would take that part back from China. I replied that there was no credence in this theory. Hence, they should recognize the truth and shun the practice of whipping up a frenzy.

India is a great country with liberal policies. But our liberalism should not be construed as our weakness and inability to protect our national interests. We will try to improve our relations while upholding our interests. We seek the support of the whole House in this endeavour.

Much was talked about media publicity. We did not conduct the summit through the media the way Pakistan did. But it seems now that we shall have to bring about some changes in conducting diplomacy in view of the presence of electronic media.

Summit level talks are held within the parameters of decorum and statements are not issued every now and then. There was no such thing in Lahore but here it seems that media publicity was being used as a weapon of aggression. This did not reflect well on our people who thought that their leadership was dumb stricken.

I had made a statement to their delegation in the presence of General Musharraf stating that we will not yield before terrorism and nobody should under-estimate our capacity of suppressing terrorism. But we did not leak this to the press immediately.

We talked with a firm voice but our firmness was coupled with decency. We upheld the parameters of decorum during the whole process of talks and we also suffered due to this. We will try to take necessary steps in future in this direction.

But there is no sense in saying that it was due to this factor that the talks failed. We have understood each other. The ball has been set rolling and we will continue to talk on some issues. I am confident that Pakistan will change its perception.