'We Do Not Believe In Accession To Pakistan'

The Amanulah faction of Jammu and Kashmir Liberation Front (JKLF) has said that rejection of nominations of its candidates for forthcoming legislative assembly polls in Pakistan occupied Kashmir (PoK) after JKLF refused to sign declaration accepting Kashmiri's accession to Pakistan has made mockery of Islamabad's commitment to the right of self determination of Kashmiri people.

"The nomination papers of the JKLF candidates have been rejected because they had declared that they believed in independence of `Jammu and Kashmir state' instead of declaring that they believed in the state's accession to Pakistan," JKLF (Amanulah) chief Amanulah Khan said at a press conference in Islamabad.

"This is a gross violation of human and democratic rights of Kashmiris and contrary of Pakistan's declared stand on Kashmir issue. It is unfortunate that Pakistan's deeds are so different from her oft-repeated claims of respecting Kashmiris wishes and aspirations", he said.

JKLF had filed 31 nominations for the 48-member PoK assembly for which the elections would be held on July 5. Their nominations were rejected on Thursday on the ground that they failed to sign a declaration accepting Kashmir's accession to Pakistan.

Khan, who stayed put in Pakistan after he was deported from Britain in 1988 for his alleged violent activities advocates complete independence for Kashmir from the rule of India and Pakistan.

This was first time that his party, which was banned in India, wished to contest the polls in PoK and also the first time that a Pakistan based political party raised such an objection to the accession clause, which has been introduced by Pakistan government in 1971.

Khan said not only the authorities rejected their nominations but also launched a crackdown on the JKLF partymen all over PoK. He alleged that a number of his partymen was beaten up as well as arrested for taking out rallies to protest the rejection of the nominations.

Amanulah Khan also reiterated his stand that the forthcoming summit between India and Pakistan would not solve the Kashmir problem .

"Bilateral talks on Kashmir issue has no use. Such talks have not made any impact in the past", he said adding Kashmiris should be involved in any quest for solution to the Kashmiri issue.

He said Prime Minister Atal Behari Vajpayee appeared serious in resolving the issue but he was surrounded by `hawks' who prevented a meaningful dialogue on Kashmir. 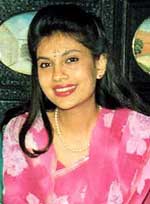