Urdu And The City

When spoken, a language is mainly practical. To transcend into art, it must be written, its words shaped into poems, stories, and plays. So can written Urdu, once the medium of Delhi's literary artists, still be found in the city? 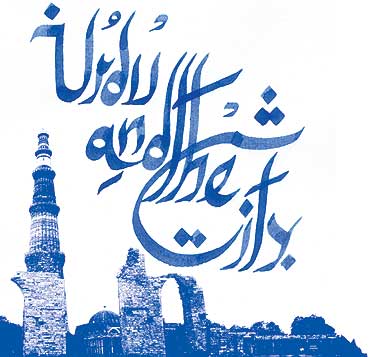 outlookindia.com
-0001-11-30T00:00:00+0553
On the steps of the Jama Masjid these days, you are as likely to hear a Bihari accent as a Delhi one. But if Urdu flourishes anywhere, it should be here in Urdu Bazaar, on the south side of the mosque, among the bookstores that stand beside stalls selling dates and restaurants offering deep fried spicy chicken. The old-fashioned bookstores open to the road, and the sound of traffic can be deafening.

My favourite bookshop in Urdu Bazaar is Maktaba Jamia, a branch of Jamia Millia University’s book depot. This unassuming shop is devoted entirely to Urdu literature, and nowhere in Delhi are books cheaper and therefore so accessible. Since 1922, Maktaba Jamia has produced only low-cost, standard literary texts.

The shop also stocks some Urdu literature in Hindi script, the latest books from other Urdu publishers, and a variety of Urdu primers for those who understand the spoken language but have yet to learn the Persian script. And it has booklets in simple Urdu, like the one on poet Ali Sardar Jafri, which make excellent reading material for new Urdu literates.
While I sat browsing through the riches on the shelves, a number of people came asking for religious books and were directed up the road. The next bookshop may deal exclusively in Islamic texts, but the nearby Kutub Khana Anjuman-e-Taraqqi-e-Urdu offers the best of both worlds—literature and religious works. Taking care of the shop is Nizamuddin, son of the man who founded it in 1939. Nizamuddin believes interest in Urdu literature is growing fast. 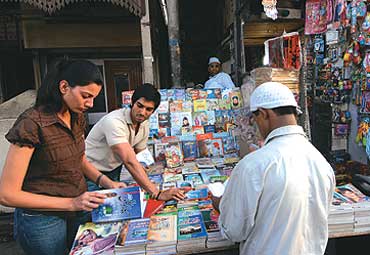 A roadside stall in Urdu Bazaar

When I asked him to name the bestsellers, he said with a smile, "People here are murda-parast. They worship the dead. So since they died, anything by Qurut-ul-ain Haider or Kamleshwar is selling like hot cakes."

Before you could say the great poet’s name, "Asadullah Khan Ghalib," he piled before me a mountain of the newest poetry books. Many were ghazal selections in inexpensive paperbacks containing classic verses and those by the latest stars of modern mushairas. My late ustaad, Ghulam Ahmad Ilmi Sahib— who taught Persian and Arabic for 40 years at the nearby Fatehpuri Masjid School—felt standards at literary functions had fallen so low he would never attend them. But the pile of books in front of me showed that a younger generation didn’t share that opinion.

"Munavvar Rana is everyone’s favourite at mushairas lately," Nizamuddin added. "And of course, the big names sell well. Javed Akhtar is there, and this is the latest book from Nida Fazli."

He handed me the book, and I flicked through its pages. My eye caught a line suggesting that poetry had flowed easily before modern life turned crossroads into major intersections and filled everywhere with concrete.

Urdu was always a language of the people of Delhi, created by and for them. Growing from the camps of troops and their hangers on, its foundation was wholly Indian. Those who developed the language pragmatically filled it with useful vocabulary from Turkish, Arabic, Sanskrit, and Persian. Forcing its way upwards in society, Urdu became the pre-eminent literary language of Delhi at a time when literature was part of the city’s organic life.

Its poetic power then made it a vehicle for revolution and freedom from the colonial power. But politics is a double-edged sword. Urdu’s identification with Muslims and Pakistan dealt such a blow that its existence is sometimes denied today, even in the old city, and Urdu-speaking Hindus call their mother tongue ‘Hindi.’ There is, of course, a close connection between Hindi and simple Urdu, which used to be called ‘Hindustani.’

Anees Azmi—a leading Urdu playwright of Delhi, whose 36 children’s plays are regularly produced in theatre workshops in the capital— believes Urdu is still widely spoken in the old city. But in his estimate, well under half of those who speak the language can read the script.

Azmi’s expressive readings of the 19th century poet Ghalib’s letters, in a clear and musical Urdu, draw audiences and prove to many would-be Urdu fans that even classical Urdu need not be over their heads. But it has to be said—many people in Delhi fear Urdu’s high-flown vocabulary and take for granted they will not understand it. For this reason, Azmi called the language Hindustani, not Urdu, when he co-coordinated a major Urdu production on Bhagat Singh. 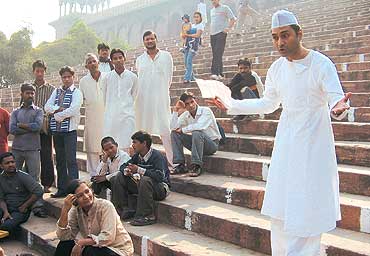 For this same reason, Mahmoud Farooqui’s dastan-goi performances are often advertised as being in Hindustani. Farooqui is recreating the lost art of Urdu storytelling. Many forms of storytelling exist in India, such as in Marathi, but dastans—tales within tales of love, magic, and adventure—exist only in written form. Having collaborated with the country’s foremost authority on dastans, Farooqui has brought at least one kind of dastan-goi back from the dead.

And audiences prove there is scope for much more Urdu theatre in Delhi. Recently, there wasn’t room for a sesame seed in the packed India International Centre auditorium when Jamia Millia staged a re-creation of the last great mushaira held at the court of Bahadur Shah Zafar in the Red Fort. A market likewise exists for one-man Urdu plays about characters from modern history as Syed Alam, another modern Urdu playright of Delhi, has shown with his productions on Maulana Azad and K.L. Saigal.


Newsprint Despair
The written tradition of Urdu is most apparent in the newspapers. Any newspaper hawker will tell you—nowadays, the biggest selling Urdu newspaper in Delhi is Roznama Rashtriya Sahara, which, its regular readers claim, has the widest coverage. Hindustan Express may have one of the few websites, but general opinion suggests the best language is found in Qaumi Avaaz, the old stalwart from the house of the Congress party’s moribund English language paper, National Herald.

Mohan Chiraghi, editor of Qaumi Avaaz, ensures that his reporters are even-handed, not just presenting a Congress point of view, and in the 1980s, he set a trend by starting an editorial page on the lines of the English language press. Chiraghi doesn’t deny that his paper has seen better days, but he believes it could be revitalized if the management wanted. 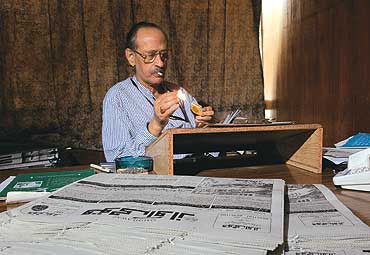 A Kashmiri pandit who grew up in the composite culture of Kashmir before the pandits left, Chiraghi is depressed about Urdu journalism because he feels that Urdu papers have succumbed to "vote bank politics," catering to narrow Muslim issues and, on occasion, playing a reactionary role. Neither does the Urdu press pay well. He finds many good Urdu journalists migrating to Hindi journalism, especially television channels, where the pay is better. Why? Urdu papers just don’t attract advertisements.

"Even if only Muslims read them, don’t Muslims buy televisions or washing machines?" Chiraghi asks in exasperation, before saying, "In the end, a language can only really do well if it is connected to employment."


Urdu on the Upswing
To boost employment opportunities, the National Council for the Promotion of Urdu runs computerized calligraphy courses in Delhi. I recently attended a prize ceremony in which 42 smart young students, men and women, stepped up to collect certificates. Their computer centre was located at Ghalib Academy in Nizamuddin West, beside the grave of the great poet and close to the dargah of the saint.

Ghalib Academy, run by the Hamdard group, hasn’t changed much in the past 30 years. It has a well-run library, its own publications, and a small museum crying out for modernization. The academy’s secretary, Dr Aqil Ahmad, believes the state of Urdu in Delhi is badtar (bad) because even though Delhi has outstanding Urdu scholars in universities, the language is virtually invisible at the primary and secondary school level. 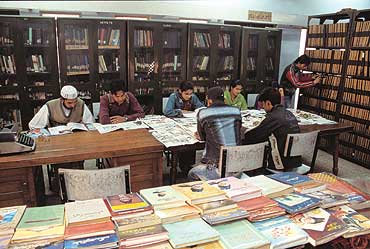 Some premier schools are offering Urdu as a subject, though not very seriously. But determined people can find places in the city to learn. The Urdu Academy, housed in a fire-blackened bungalow opposite the Kashmiri Gate Metro station, runs basic courses in ten centers, while Delhi University holds some day classes. Jamia Millia’s department of Distance Learning even has a correspondence course.

Ghalib Academy also hosts several literary events a year. I attended one on the short story, where authors read out works that focused on contemporary issues including communal tension, dowry, and globalisation. Perhaps the evening’s most passionate speech came from Dr Ali Javed, who heads the government’s Urdu Promotion Council. He said there was a conspiracy to label Urdu as a language of the madrassa and the Muslim. He viewed Urdu as the symbol of Indian culture—the syncretic culture that India, alone of all countries of the world, possessed. Urdu was, he argued, part of a heritage that stands against oppression by religion or any section of society. He called on every wise, thinking person to cherish it.

I was reminded of something Anees Azmi had told me. "Many real Urdu wallahs," he said, "love the good things of life, like food, and don’t come to my performances. I find the Hindi wallahs are the ones really taking up Urdu." This is in a way a sign of hope.

Linguistic Power
Urdu is resurgent in Delhi today, due not to any state patronage, but to its inherent strength. It is a language of culture, humour, and good manners, elastic enough to express anything with style and grace. The prejudice that developed against it during Partition has faded, and it is attracting ever-increasing numbers of people from all ages and communities. This is the opinion of Indira Varma, president of the Sham-e-Ghazal Society, which for decades has been committed to promoting the ghazal and holds several concerts each year.

Indira belongs to a Sikh family originally from Peshawar. Her father loved Urdu and Persian poetry, and after migrating to India in 1947, Indira began to write poetry. She finds it impossible to consider verse apart from music. Her latest book, Shafaq Ke Rang, even comes with a CD of her ghazals sung by Sudeep Banerjee and Rekha Bharadwaj, two of a new wave of singers attracted to this condensed, elliptical poetry.

English publishers reflect the growing interest in Urdu as they move into Indian language publishing. The historical novel, Ka’i Chand The Sar-e Aasman, by eminent critic and author Shamsur Rehman Faruqi, recently published in Urdu by Penguin, has developed a cult following. It can even be found in some top English bookstores in South Delhi.

A page of history has turned. The old world of Delhi’s Urdu is gone for good. But the language is great enough to have found a place in the city’s current cultural renaissance.