The once-maligned rotation policy is a big reason why Australia finds itself on top of the pecking order in one-day cricket. 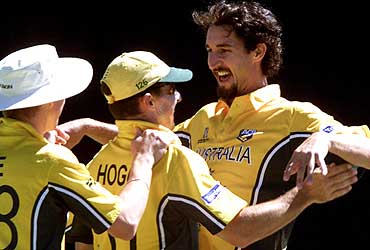 In December, when Adam Gilchrist opted out of the Australian team for the fifth match of the home triangular series due to injury, the question arose as to who would open the batting with Matthew Hayden. As many as four Australians raised their hands to take first crack at Sri Lanka: skipper Ricky Ponting, the elegant Damien Martyn, the pugnacious Darren Lehmann and wacky replacement keeper Ryan Campbell.

Eventually, Lehmann got the vote, and he dutifully proceeded to smash the Lankan bowlers disdainfully all over WACA for a century in even time. Truth is, each of those four could have opened the batting, and done a competent job of it.

This one incident captures many reasons why this current Aussie outfit is the best in the business today. It demonstrates the depth of talent in Australian cricket. It highlights the high degree of flexibility and preparedness among players to change costumes, and perform to the demands of a situation. It speaks volumes for their willingness to play roles they wouldn’t have otherwise drawn in the regular game plan. And do it well.

It’s a package that has neither sprouted overnight nor has been the result of some right configuration of stars. It’s been a journey, charted by men with vision and ideas, men who are open to criticism, men willing to take risks and embrace change, men who recognise that the quest for sporting excellence is an ongoing endeavour. And, like most journeys, the path hasn’t been straight, but filled with advances and retreats, punctuated by trial and error.

Two summers ago, during that famous tour to India, the Australians started playing musical chairs with their team selection for the one-dayers. They called it the rotation policy. The brainchild of then-captain Steve Waugh and coach John Buchanan, it involved giving each member in the squad of 14-16 players an equal opportunity to play. It was somewhat similar to the pitching rotation in baseball, where teams play 160-odd games in a season, but each pitcher starts, on an average, in around 30 of those.

The Aussies, through this rotation policy, were suggesting a similar reduction in workload for their key players in a busy cricketing calendar. In other words, they were abandoning the concept of the best combination of 11 players turning out game after game. Lengthening playing careers, keeping players match fit and hungry to succeed were just some of the objectives of the rotation policy.

The Aussie think-tank figured that throwing in more players into the field would increase bench strength, and shuffling their roles would make them more flexible in tackling match situations. By extension, it would also reduce the aura of indispensability that surrounded the top players. They wanted to get to a point where any playing 11 was good enough to win a match, and so were constantly making two to four personnel changes in the side, with an equal number in the batting order. Such was the reservoir of talent coming through, Australia could afford to experiment.

With players coming in and going out, and fewer opportunities up for grabs, the competition for places was stiff. It was a potent motivational tool, but it could backfire by breeding insecurity among players. The scope for failures had been reduced. The rotation policy also sometimes took away the momentum -- for instance, a player would get a big score but yet would find himself out of the team in the next match. It was the ultimate team concept, which required taking players into confidence. In return, it asked the players to understand and adapt.

The rotation policy was based on sound cricketing logic. But for it to be accepted as a workable strategy, Australia had to continue with their winning ways. Which they did, winning the series against India and swamping England and Pakistan in the NatWest triangular later that year. Experts, though, were still divided on this random system of entry and exit of players.

Meanwhile, the Australians stuck to their guns, and continued to chop and change. The rumblings continued. In late-2001, after Australia lost the first three matches of the eight-match round robin stage in the home triangular, featuring New Zealand and South Africa, the criticism reached a pitch. The Aussies were forced to relent, and the rotation policy, in the form it was conceived, was shelved. But not abandoned.

Since then, the Australians haven’t followed the rotation policy in letter, but they have followed it in spirit, allowing for a certain degree of flexibility. No more do they change for the sake of change. Changes in line-up are now dictated more by player form, opposition strength and the big picture significance of each match. So while they always field their best side for the important games, they are inclined to give reserve players a hit in the dead rubbers.

In this grand design, they continue to experiment with new combinations and tactics, as well as prepare for contingencies. Halfway through the league stage of the World Cup, Australia is the only side among the Cup contenders that has given all its players at least a game. Designated stand-in keeper Jimmy Maher has even had an outing with the gloves.

Maher, in fact, epitomises the spirit behind the rotation policy and the ways in which it has shaped this Australian side into the formidable unit it is. Maher, a player on the fringes for a while, has played a multitude of roles since he broke into the team during the 5-1 away series mauling of South Africa in early 2002. In the second match of the series, Maher dropped anchor at number three to score a match-winning 95. The very next match, he came in at number six in a run-chase, and smashed an unbeaten 43 of 32 balls, adding 39 for the last wicket along with Nathan Hauritz in a dramatic last-ball win. And he can also keep wickets.

Maher, who has been groomed to play the role of the ‘floater’, isn’t a stray case. In the recently-concluded home triangular, where they won nine of their 10 matches, injuries took quite a toll on their players. For most of those matches, they had to do without the bowling trinity of McGrath, Gillespie and Warne. Their places were taken by seamers Brad Williams and Nathan Bracken, chinaman bowler Brad Hogg, and batting all-rounder Michael Clarke. And each one of them delivered, often at crucial times.

The contributions of such newer, lesser-known players in recent times is a significant plus for the Australian side. By giving them opportunities, the Aussies ensure that they have a reasonably-large pool of players good enough to compete at the highest level who aren’t overawed when it comes to the crunch. What they have is an embarrassment of riches.

Just look at who’s sitting on the sidelines back home and what they have been up to in their domestic one-day competition, the ING Cup. There’s Steve Waugh. Pensioned out of the shorter format by the Aussie selectors a year ago, his batting is a huge reason why his state side, New South Wales Blues, made a late dash and, yesterday, won the ING Cup.

In the final, chasing 208, Waugh smashed 88 of 55 balls, steering his side to victory in just the 27th over. Then, there’s Test opener Justin Langer, who led the ING Cup batting averages (86 against his name) and was the second-highest run-getter in the competition. That’s the quality of batsmen Australia can’t accommodate in the national side.

In Ryan Campbell, they have a competent keeper-batter in the wings. And in the bowling department, there’s the disgraced Warne, Bracken and Williams. All this while, Andy Bichel continues to hone his credentials of being the best 12th man around. While teams are trying to figure out whom to play, Australia is scratching its head on whom to drop.

So far, Australia haven’t felt Warne’s absence in the World Cup, though admittedly their bowlers are still to encounter a big-match, nerve-tugging situation. It’ll be interesting to see how the Australians in general and Hogg in particular respond when the heat is on and there’s no Warne to weave his magic.

Before the competition, Glenn McGrath said the Australians were looking to win the Cup without losing a game. It’s a statement that smacks of arrogance and belittles the opposition. But, it’s arrogance backed by confidence and conviction. Realistically speaking, the Aussies are capable of matching up to those high expectations. No other side in world cricket today, and few in the history of the game, can pull off such a run. Australia can.

Australia presently has more players with the talent and the ability to compete at the highest level with success than all cricket-playing countries. And what separates them from the chasing pack is this innate ability to pull together as a team and, more often than not, put into practice what is laid out on the drawing board back in the dressing room.

They are a team of individuals who possess boundless talent, a wonderful work ethic, the drive to maintain a high intensity level, the tenacity to dig deep, the confidence to take on the best, and a fierce desire to protect their bastion.

Undeniably, Australia is the best cricketing side in the world today, in both versions of the game. Their superiority is more evident in the longer version, which demands a team play good cricket over long stretches.

In the shorter version, too, their claim to the throne is uncontested, though they have a lower winning percentage than Test matches. Blame it on the one-day format, which brings it all down to 100 overs of cricket. On some days, every team will play to its potential, and raise its game.

That’s the reason Australia might yet not win this World Cup. Only the very brave would bet against them not making the semi-finals. But after that, each of the four semi-finalists would have an even shot at the title. That’s the beauty -- and cruelty -- of the knockout format. All it takes is a brilliant innings, a brilliant spell, a team on top of its game.

In the league games, Brian Lara and Stephen Fleming did South Africa in, and there’s as good a chance as any that someone could do the same to the Aussies in those shootouts. If they do, they will be crowned world champions, but they still won’t be the best in the world. In the foreseeable future, that mantle will continue to rest with the men from Down Under.