It Was My Devotion To Mahant Yogi Adityanath, Says Cop Who Knelt Down Before UP CM

The photographs, posted with a caption “Feeling blessed” show Singh applying a tilak on Adityanath's forehead while another one shows him garlanding the Chief Minister. 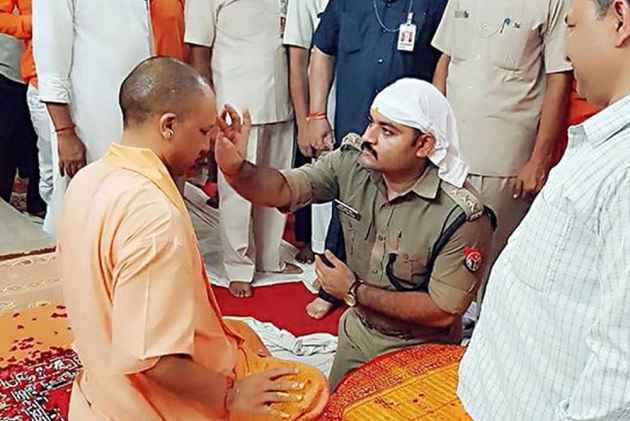 A police officer in Uttar Pradesh’s Gorakhpur whose photographs showed him kneeling down at the Chief Minister's feet with folded hands, said he did so to take the blessings of Peethadishwar Mahant Yogi Adityanath.

The photographs, shared by Singh  went viral on the social media, forcing him to clarify his stand.

"I was deployed at the temple for security duty and I went there after completing my work with full dedication, when most of the disciples were seeking blessings. Out of my devotion and after removing my belt, cap and other accessories and covering my head with a handkerchief, I took blessings of Peethadishwar Mahant Yogi Adityanath," Singh said.

"My shirt was wet with sweat and I had not ignored my work. Mahant Yogi sits in the position of a guru on two occasions in the temple - one at the time of Dussehra and other on Guru Purnima. I always pray at the temple for serving the country honestly and with dedication. It was just out of my devotion towards Baba Gorakhnath and nothing else," he explained.

Singh is posted as Circle Officer, Gorakhnath in Gorakhpur. He had posted images on social media of him seeking blessings from Chief Minister Yogi Adityanath on the ocassion of Guru Purnima on Thursday.

The photographs, posted with a caption “Feeling blessed”, triggered a debate, with many people asking whether a policeman should have done this in his uniform.

I don’t think it should be anyone’s concern, until unless he is biased in his duty, we are in a country where each government program start by lighting a lamp in Hindu rituals and so forth... what’s big deal?!

"This is a grey area and can be interpreted either way. But, a police officer needs to uphold the dignity of his uniform," Thakur pointed out.