It is not just the Adani Group which has benefited from the dilution of norms for making industries responsible for the cleanup and rehabilitation of affected people and damaged areas.​ 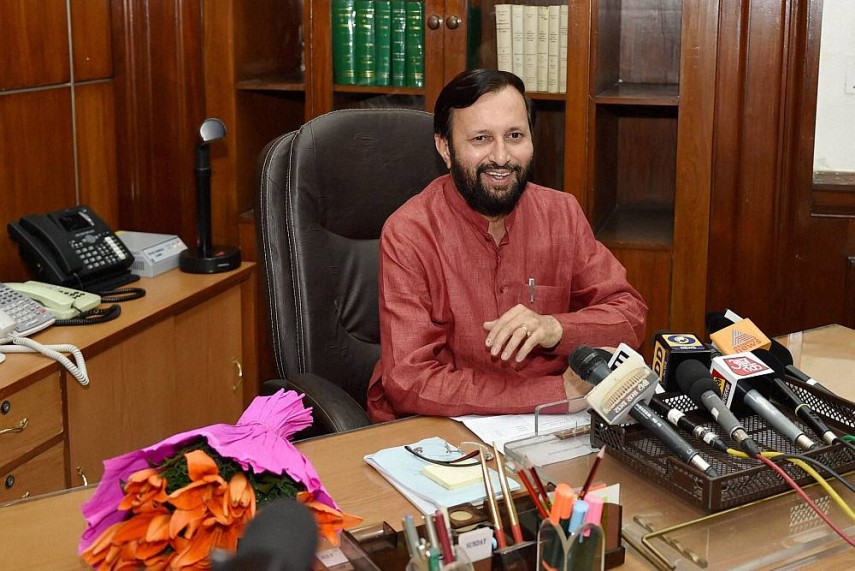 Environment and Forests Minister Prakash Javadekar was not expected to get a cabinet berth in the second cabinet expansion by Prime Minister Narendra Modi on Tuesday. Yet, he is the only one to have been rewarded for his work in speeding up project clearances for ease of doing business.

Clearly, Javadekar has delivered on the Modi government's promise to the corporate sector for its overwhelming support to his government.

It is not just the Adani Group which has benefited (including the waiver of a Rs 200 crore fine as recommended by an expert panel headed by Sunita Narain of Centre for Science and Environment for damages in the Mundra coastal region due to Adani's port project) from the dilution of norms for making industries responsible for the cleanup and rehabilitation of affected people and damaged areas.

For the record, the ministry proudly boasts on its website that in the last two years 2,000 projects have been "unlocked" to clear investments of Rs 10 lakh crore that had the potential to create 10 lakh jobs.

Through the reconstitution of the National Board for Wildlife (NBWL), 400 cases have been cleared in just 8 meetings to push ahead road and other infrastructure projects like power transmission lines. With the Supreme Court having decided that NBWL's word is to be final, a diluted body makes it easy to push through clearances, point out environmentalists. For instance, 349 mining proposals have been given the nod in the last two years.

Efforts to dilute critical environment laws to facilitate easy and quick approvals to industrial projects continues with the recent draft notification seeking to amend the Environment Impact Assessment (EIA) legislation of 2006 and replace it with an Environment Supplement Plan (ESP) which will allow violators to continue with the project despite not having got prior environment clearances.

This is "the first step towards killing the EIA process in India," says Kanchi Kohli of Centre for Policy Research-Namati Environment Justice Programme.

The process of speeding up clearances akin to what was being done in the tail end of UPA-II tenure, when many environment safeguards were ignored. This makes one wonder whether the so-called 'Jayanthi Tax', allegedly levied on the Adani Group's Mundra Port project, leading to a delay in project clearances, was bad. It has been replaced with 'taxing the people' — they will have to bear consequences of environment damage due to government laxity.