It would nag Kumble and Harbhajan why they failed in Nagpur, while Monty Panesar, just out of his cricketing nappies, was such an influence on the same surface. 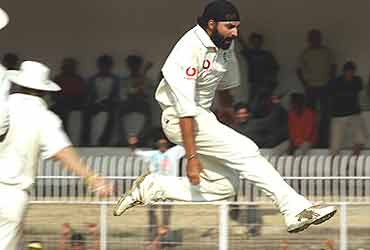 India today wants to know why its spinners failed in Nagpur. It would nag them that Anil Kumble and Harbhajan Singh, good as they are, still need a pitch to their liking. It would not help that a kid like Monty Panesar, just out of his cricketing nappies, was such an influence on the same surface. Imagine the contrast -- the Indian spinners with 700-odd wickets between them and two England spinners making their debut!

It is apparent England's spin-play has come up by leaps and bounds. They are making an initial forward movement; the defence has improved greatly and the sweep is being employed judiciously. I have been a great advocate of the sweep for it makes a spinner alter his length and sows doubt in his mind.

Defence also is of utmost importance: it could allow you to be on the backfoot and be unnerved even when a clutch of fielders are around the bat.

It did not help India that they did not have a dossier on Panesar or Alistair Cook for that matter. The left-arm spinner from Luton has a tidy style and bowls at a good pace, pushing the ball through, which was a help on that sort of pitch.

There is not too much of evidence India had on either of them. It would be fun to see if they are any wiser in Mohali.

I was in Antigua on a holiday when Cook, touring with England A, scored a hundred against an Antigua eleven. A few days later he had flown some 10,000 miles and made a fairytale debut in a Test in India. His virtues do not need a repeat here but I do feel it helps as a batsman if you are an opener.

The number one position is the best place to bat, more so in the sub-continent. It allows you to dictate the innings, the whole game is in front of you. It is not the same when you are at number five, six or seven when the game is set for you. Once you go through the opening bowlers, you are in better frame of mind against the slow bowlers.

England would also look at the success of Paul Collingwood and Kevin Pietersen with relish and there is reason to look forward to Andrew Flintoff's brand of captaincy.

Matthew Hoggard was such a massive influence and really, for a team missing four of its Ashes heroes, England's ascendancy was nothing less than astonishing. The Next Generation of cricketers are coming through all the time.

It also has not escaped notice that England have begun to field younger players which was not the case in not-too-distant past. For long, England's cricketers did not mature till they were in their mid-20s. Notable names which come to mind are that of Flintoff and Mark Ramprakash.

Now England's county structure is stronger than three or four years ago. Talents are easier to identify because of regular screening at the A level. The average age of an England player has surely crept forward by a few years.

India, on the other hand, would be wondering if they need to fix their wobbly middle order or if this is the bowling attack which would win them matches.

I do not think it would come to a stage where they would field five bowlers and shorten the batting, knowing the damage the likes of Hoggard can do. The team that went into the Test with such great hope cannot turn so bad in the matter of four days.

India can look at the positives of Wasim Jaffer's emergence or the spunk young kid S Sreesanth showed at the starting block. Mohammad Kaif's 91 will ensure that he would not have to wait till eternity for yet another chance.

The likes of Rahul Dravid, Sachin Tendulkar and VVS Laxman have the kind of reputation which cannot be washed away in the matter of a match. After all, it is not as if India lost the game. They still caused England a few flutters in the closing minutes.

It is not bad though to keep an eye on the young fast bowlers coming through the system like the one who took 10 wickets in Baroda and spelt England's doom in the practice game. When the pitch is of no use and the spinners are struggling, fast bowlers are the answer for wickets. Still, it would be a bold India if it rings in the change at the cost of a batsman or, horror of horrors, bench a spinner.

That would be one hell of a tribute to the way England played in Nagpur!