...and a UNSC Secretary General. Last week, two Koreas have in their different ways impacted on the world scene, making Asia the centre of instability, a nuclear flashpoint, if you will... 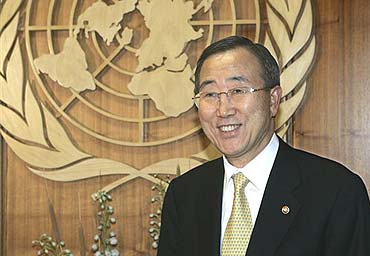 Of the several divided countries that emerged in the middle of the last century, the evolution of the two Koreas—the Republic of Korea (South Korea) and the Democratic Peoples Republic of Korea (DPRK—North Korea)—is perhaps the one which most reads like a fable. Last week, both countries have in their different ways impacted on the world scene. The foreign minister of one country was recommended by the Security Council to the UN General Assembly as the preferred successor to Kofi Annan, the UN Secretary General —and as we post this, he has been elected by acclamation and without vote—while the other has, by announcing and conducting its first nuclear weapons test, caused not only world-wide concern and condemnation, but has, perhaps, shattered both regional stability and has seriously damaged the international nuclear non-proliferation regime. These events, involving these two ethnically homogenous peoples, have their separate implications for not only the region, but for Asia and the world and therefore, for India's foreign policy too.

Both North and South Korea started out as poor countries ruled by military dictators; yet while the South, an ally of the US, became a democracy and one of the Asian Tigers with phenomenal economic and social growth rates, the other remained tied to a military dictatorship, and became more and more isolated, with increasing poverty levels, dependent on food and energy aid, and with fragile relations with its neighbours, except for China. (Russia, which shares a short border with North Korea has drawn itself away from outright support.)

The campaign and endorsement by the Security Council of Ban Ki Moon, the Foreign Minister of South Korea, has been approved by acclamation in the UN General Assembly. For the next five years at least, Asia's interests will likely be more relevant to the international community, and not only because of Asia's economic successes.

India's ill-fated effort to get her candidate, Shashi Tharoor, an Undersecretary General in the UN already, has without doubt affected her image as a sober growing power with the ability to influence international developments. Fighting elections in the UN call for the expending of much political capital, if one is serious about getting elected. While the post of the UN Secretary General is a prestigious one, India has many other priorities in the international field to have spent this capital on a single election. Fortunately, the damage, such as it is, is not serious, and one can hope for as good a working relationship with Ban Ki Moon as with Kofi Annan. On the other hand, China's image as a global power, with the ambition of becoming a regional hegemon, has suffered a more serious setback with the North Koreans almost thumbing their noses at Chinese efforts to get them to desist from testing, leading to an unaccustomed sharp reaction from China to the North Korean nuclear test as a "flagrant and brazen" flouting of international (read Chinese) opinion. Clearly, China's influence, even in its own backyard has been exaggerated.

While the appointment of a South Korean as UN Secretary General is a matter of South Korean and possibly Asian pride (there were other Asian candidates apart from Tharoor), it is unlikely to give rise to apprehensions internationally. The recent North Korean test, however, has grave implications for international peace and stability.

It must be pointed out that the North Korean test was not totally unexpected; in fact, several days before the test, the DPRK had announced its intention of testing. This came as a logical culmination of a process which began with the North Koreans giving notice of its intention to withdraw from the Nuclear Nonproliferation Treaty in 1993. Since then, diplomacy has been tried in many forms, by the US, by promising civil nuclear energy if North Korea gave up its nuclear weapons programme and by aid, by the South Koreans and their ‘sunshine policy' of promoting contacts between the north and South, by the six-party talks, which included Japan and Russia, and not least by China, which apart from supplying the impoverished nation with food and oil, tried to wean it towards opening up its economy as China itself had done, apparently believing that economic progress would allay the fear and paranoia which seemed to determine North Korean policies.

North Korea has remained nothing if not consistent; after throwing out the UN inspectors from their nuclear facilities, they claimed to be a nuclear weapon State, tested several missiles early this year. leading inexorably to the weapons test. The impact on South Korea is bound to be immense. Their 'sunshine policy' is bound to cease; the question that arises is would it go nuclear too? It has the technology, and the US would have to take effective and satisfactory steps to assure South Korea of its security. Of course, South Korea is also threatened by the North's conventional weapons, with Seoul only 50 kilometers from the border.

Japan is in much the same case, but even more so; the debate on placing more emphasis on military strength has been under debate in Japan for some years, and Commissions have been set up to examine the relevant articles of the Japanese Constitution to achieve such a change in emphasis. This might include nuclearization, but, as the only victim of nuclear weapons, this is unlikely, even though Japan has a vast civil nuclear energy programme and the technology which could be used to produce nuclear weapons.

The US has termed the test "provocative"; what will it be provoked to do? It has clearly stated that it would like a regime change in the DPRK and would not tolerate it becoming a nuclear weapon State. North Korea is already under some sanctions; winter is coming, usually a bitter unforgiving season, and more sanctions might cause the desired regime collapse, but would create a humanitarian crisis and refugee outflow of huge proportions. Will the US, facing Congressional elections, consider military action? Would it not have the same results? If it takes no action, how would South Korea and Japan, whose nuclear security is assured by the US react? How would Iran, no doubt watching unfolding events with interest react if no firm action is taken by the US? Some analysts have also pointed to the possibility of a nuclear reaction from Taiwan, a somewhat less likely scenario.

The most painful dilemma faces the Chinese: It cannot sit back and take the slap in the face given by their ally— note their extremely strong reaction to the test. It also would be concerned at possible reactions—whether nuclear or conventional— from Japan and South Korea, much less Taiwan. Strong action against North Korea will have to be taken to prevent this escalation. But if severe economic sanctions are placed on the country, it is China which will have to cope with the flood of refugees. If military action is contemplated, China's own security would come under threat. Her consequent militarization would or should be a cause of concern for India.

North Koreas links in the nuclear field with Pakistan's AQ Khan network is a further matter of concern, as is North Korea's threat to sell nuclear technology abroad. A further complication to India's interests might arise if the non-proliferation lobby in the US draws strength from the event to raise more vociferous objections to the Indo-US civil nuclear deal. The likelihood of the Senate heeding this pressure would be equal perhaps to the appreciation, not only of the difference between India and North Korea, thereby necessitating an 'exceptionalisation'  of India, but to the importance of strategic relations with India in an increasingly turbulent Asia.

Asia would become the centre of instability, a nuclear flashpoint, if you will. Asia will be the focus of attention , not because of its Secretary General but because the other half of the divided country will have lit the fires.

Arundhati Ghose was India's permanent representative/ ambassador to the United Nations. In 1996, she dramatically vetoed the Comprehensive Test Ban Treaty at the Conference on Disarmament, a step that some say would not have been taken without her. This piece was originally written for Outlook Saptahik.

Banker To The World