Turkeys On The Moon...

You can golf on the moon, too. You'll have so much fun up there, you might not want to come back. Better take Cheney with you, too. Pretend it's a medical experiment or something. 'That's one small step for man, one giant leap for every American who' 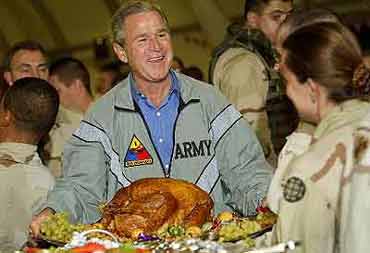 Well, it's going on two weeks now since your surprise visit to one of the two countries you now run and, I have to say, I'm still warmed by the gesture. Man, take me along next time! I understand only 13 members of the media went with you -- and it turns out only ONE of them was an actual reporter for a newspaper. But you did take along FIVE photographers (hey, I get it, screw the words, it's all about the pictures!), a couple wire service guys, and a crew from the Fox News Channel (fair and balanced!).

Then, I read in the paper this weekend that that big turkey you were holding in Baghdad (you know, the picture that's supposed to replace the now-embarrassing footage of you on that aircraft carrier with the sign "Mission Accomplished") -- well, it turns out that big, beautiful turkey of yours was never eaten by the troops! It wasn't eaten by anyone! That's because it wasn't real! It was a STUNT turkey, brought in to look like a real edible turkey for all those great camera angles.

Now I know some people will say you are into props (like the one in the lower extremities of your flyboy suit), but hey, I get it, this is theater! So what if it was a bogus turkey? The whole trip was bogus, all staged to look like "news." The fake honey glaze on that bird wasn't much different from the fake honey glaze that covers this war. And the fake stuffing in the fake bird was just the right symbol for our country during these times. America loves fake honey glaze, it loves to be stuffed, and, dammit, YOU knew that -- that's what makes you so in touch with the people you lead!

It was also a good idea that you made the "press" on that trip to Baghdad pull the shades down on the plane. No one in the media entourage complained. They like the shades pulled and they like to be kept in the dark. It's more fun that way. And, when you made them take the batteries out of their cell phones so they wouldn't be able to call anyone, and they dutifully complied -- that was genius! I think if you had told them to put their hands on their heads and touch their noses with their tongues, they would have done that, too! That's how much they like you. You could have played "Simon Says" the whole way over there. It wouldn't have been that much different from "Karl Says," a game they LOVE to play every day with Mr. Rove.

Well, if you're planning any surprises for Christmas, don't forget to include me. When I heard last week that you wanted to send a man back to the moon, I thought, get the fake goose ready -- that's where ol' George is going for the holidays! I don't blame you, what with nearly 3 million jobs disappeared, and a $281 billion surplus disappeared, and the USA stuck in a war that will never end -- who wouldn't want to go to the moon! This time, take ALL the media with you! Embed them on the moon! They'll love it there! It looks just like Crawford! You can golf on the moon, too. You'll have so much fun up there, you might not want to come back. Better take Cheney with you, too. Pretend it's a medical experiment or something. "That's one small step for man, one giant leap for every American who's sick and tired of all this crap."