Trapped In A Blind Alley

Indian Muslims from being mishal-e-raah (pathfinders) have, over the last 60 years, become raah ke pathar (stones on the path). The slide has been unrelenting, and neither the community itself nor its leaders have made any move to arres 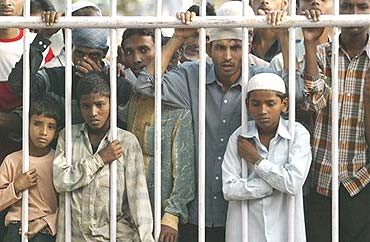 I stood facing a crowd, mostly young boys. A pair of bright eyes caught mine. "Your name?" I asked, choking on the stench from the open drains around the slum. "Saddam," the voice was confident. He was wearing a dirt-streaked black shirt bearing the words 'Lost Boys'. The scrawny, malnourished, grimy bunch epitomised the epithet on Saddam's shirt. Muslims of Malegaon, a forgotten people of a forgotten town in Maharashtra. A town of seven lakh people, 75 per cent of them Muslim, which gained recognition in September because of the bomb blasts.

For me, Malegaon captures the Indian Muslim predicament. I have also walked in other Muslim ghettos, the gallis, mohallas and chalis of post-carnage Gujarat and resettlement slums such as Bombay Hotel and Madani Colony in and around Ahmedabad. While Malegaon is a snapshot of the slow decline, Gujarat is the long shot of sudden penury and sub-human existence of an erstwhile prosperous people.

I recall the early post-Partition days in Delhi where we relocated from our watan, Panipat. By mutual agreement of the governments of India and Pakistan, Panipat's Muslim majority was herded in trucks and sent across the border, while Hindus from Punjab were brought in. Thus I lost my entire family. As a child, I had a nameless fear that I was somehow responsible for the massacre of Hindus and Sikhs. I had read Saadat Hasan Manto's short stories. One such story was Mishtake in which a Hindu was killed in Amritsar and when his corpse was stripped, the hoodlums realised their "mishtake".

I recall my early school days when slowly, in a Gandhian setting, my fear was expunged. With my peers I took bold strides into the future, proud of being Indian, stirred by the ideas of Panchsheel, Non-alignment, and Ganga-Jamni tehzeeb. The optimism was best seen in the mushaira at Delhi's Red Fort with the prime minister as Mir-e-Mehfil. It was a euphoric era for Muslims who were proud of wearing khadi and celebrating Hindu festivals.

Today after five decades, even as a member of the Planning Commission, I suddenly feel my Muslim identity thrust into my face. Post-Babri, post-9/11, the world seems to have split into two camps: Muslim and non-Muslim. As I struggle with my sudden painful consciousness of my Muslimness, I think that my country, perhaps, is the only one in the world which can turn the tide and negate the theory of the clash of civilisations.

And then I look around me in Malegaon. In a town of seven lakh, there is no health facility, 85 per cent of the population is crammed into slums. There are open drains, flies and mosquitoes abound, chikunguniya and dengue, detected and undetected, take their toll. Children are everywhere, but where are the schools? Most of the older ones are dropouts who work on powerlooms. A survey revealed that 33 per cent of primary school students are hearing-impaired because of the deafening din of the powerlooms.

In 1983 a high-powered panel for minorities was appointed by Prime Minister Indira Gandhi and headed by Dr Gopal Singh. Its report revealed a gloomy picture of Muslim backwardness, especially in education. In the same year, the prime minister's 15-point programme was proclaimed. It stated, "India of our dreams can survive only if Muslims and other minorities can live in absolute safety and confidence." The 15 points covered all factors which resulted in backwardness, such as communal riots, lack of representation in state and central services and nil access to the 20-point development programme. Under this programme, 41 districts were identified for close monitoring of economic development. Nothing happened.

In a few days, the Sachar Committee's findings will be placed before the nation. It will be interesting to see whether this induces a sense of deja vu for those familiar with Gopal Singh's findings more than 20 years ago. From early reports, it seems that the meticulous work of Dr Abusaleh Sherriff and Azra Razzak may actually prove a slide.

Indian Muslims from being mishal-e-raah (pathfinders) have, over the last 60 years, become raah ke pathar (stones on the path). The slide has been unrelenting, and neither the community itself nor its leaders have made any move to arrest this. Nor has the media. The Gudiyas and Imranas have hogged headlines. Images of veiled women appear with or without reason, to titillate readers. An aggregate of the two confirms stereotypes of "retrograde Islam". But very few scribes and producers have bothered to highlight the Malegaons. They are present in every one of our 600 districts and yet they remain invisible to all. How many people have bothered to flag the conditions of the Muslim artisans, the weavers of Benaras and Bhadohi, all skilled workers, many of them women, who create works of art in dark cottages, starved of livelihoods?

But awareness is growing that the present state of denial for 150 million is against the national interest. This has resulted in the Approach Paper to the 11th Five Year Plan containing specific provisions for Muslims, the highest priority being accorded to education, especially for the Muslim girl child. We have a new programme: the Prime Minister's 15-Point Programme 2006. The Approach Paper demands its implementation.

The onus is equally on the Muslims. What are they going to do to better their circumstances? Today the only bright spot in a dismal picture is their above-average female sex ratio. In pre-Islamic Arabia, the girl child was buried at birth. One of the first injunctions of Islam was respect for the girl child's right to life. This lesson the Muslims have learnt; but there are many other lessons. The first word of the Quran is 'Igra' which means 'read'. It seems that the time for that has at last arrived.

Syeda Hameed is a member of the Planning Commission