South Africa termed it a grudge match against Sri Lanka and were as good as their word. The low total didn't matter nor the dew which has teams shaking in their boots. 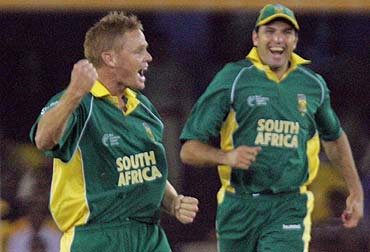 South Africa termed it a grudge match against Sri Lanka and were as good as their word. The low total didn't matter nor the dew which has teams shaking in their boots.

In this Group of Death where all teams had at least one win each by Tuesday, South Africa are picking up the pace at the right moment. How I would love to watch them against Pakistan - as I would to see India against Australia which essentially implies that semi-final line-up would be a surprise till the very last second.

If you run the gamut of successful one-day ingredients a few pointers emerge: competitive instincts, deep batting, varied bowling, stifling fielding and tons of experience. This is what defines Australia and this is what makes South Africa consistently the second best side of the last decade. They will be one of my top three teams for the World Cup.

Judged by the same scale, Sri Lanka has some serious work to do. They still rely on Chaminda Vaas to make early inroads and Sanath Jayasuriya to blast them off the run-blocks. Otherwise the batting stutters even though they have the likes of Kumar Sangakarra and Mahela Jaywardena who are very fine players but don't threaten and finish oppositions like Jayasuriya does and Muthiah Muralitharan has too much left on his plate. I guess they are in for a reality check.

Sri Lanka doesn't belong to this exclusive club -- not yet. They still sit uneasily on the table where lions are feasting. In most conditions, I would back Pakistan and India over them. Much as their bowling has come along and fielding has improved, topped by Jayawardene's engaging captaincy, their teeth is still not sharp and long enough to bite deep outside of home where they are tigers. Unless and until you are an England!

South Africa on the other hand will build up a good steam ahead of World Cup by taking care of India and Pakistan at home in the coming months. They are unstoppable at home and if you disagree please name a team other than Australia which last won a Test on their turf.

Even in alien conditions, a few things work for them. Their fast bowlers are tall and when the likes of Makhaya Ntini hit the deck, the uneven bounce of sub-continental pitches could be disconcerting for batsmen.

A few barbs and breaks have done their seniors no harm. Shaun Pollock will always be in my World eleven and it's not because ICC's rankings are my gospel. He will always be economical and despite the drop in pace, capable of striking early blows.

Jacques Kallis is another Prince Charming who first steadied the ship and then bowled a lively spell of 86-87mph. I loved his spell to Fervez Maharoof where he teased the batsman-with-no-footwork outside the off-stump before a wide off-break was duly steered to lone slip. These two, not for nothing, are the top all-rounders of the game along with Andrew Flintoff.

What the Proteas lack is a quality spinner. It didn't hurt them on Tuesday nor the fact that 219 wasn't a goodly total. In that sense the batting has some work to do which I detected is hesitant to hit over the top.

The lack of creativity could hurt for Murali, very smartly, kept drifting on to their pads and with two fielders in the deep on the onside, there were no easy boundaries to be had. The option of course was to hit inside out on the offside which is easier said than done against the champion off-spinner on slow pitches.