The West Indies will be a good unit in the not-too-distant future, but the World Cup has come just too early in the development of many of these players. But miracles do still happen. 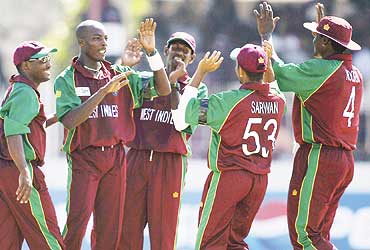 outlookindia.com
-0001-11-30T00:00:00+05:53
Now that the West Indian selectors, headed by Sir Vivian Richards, have named the 15 players who are supposed to regain past glory to the West Indies in this World Cup, it is just the right time for a reality check.

For, from the outset, one must admit the fact that the West Indies will find it difficult to qualify for even the Super Six stage. Despite former captains Clive Lloyd—who led the West Indies to wins in 1975 and 1979 but somehow (many still do not know how it happened) lost to India in 1983—and Richards giving the West Indies a good chance, one must be realistic.

The strange thing about this tournament is that while the predictions seem tremendously optimistic, the chairman of the West Indian selectors also admits that they "had to pick horses for courses". I suppose that while we exist for the present and all that it has to offer, we all want better things in the future. But fantasy has never won a cricket game or a one-day series yet!

One only has to think of the teams in Pool B—without even worrying about the Pool A teams—to realise that the West Indies will have to play out of their collective skin to proceed beyond the league stages. As a West Indian, former player and member of the 1979 World Cup-winning squad, I would like to feel that they will make it into the semi-finals and finals, but that, while not impossible, would in my mind be the first tangible miracle of 2003. To be very frank, the team has been too inconsistent over the last few one-day series to warrant such optimism. They did beat Bangladesh and India overseas recently, but that came after India returned the favour in advance in the Caribbean. Perhaps when we are hosts in ’07, they will be better poised for thoughts of a win, but ’03 is too early.

Of the rest of their group, the West Indies should—and I emphasise "should"—beat Bangladesh, Kenya and Canada. Please note, however, that Canada beat the West Indies ‘A’ team in an odi series earlier this year, while Kenya will never forget their win over the West Indies in the 1996 World Cup. Surprises and upsets, therefore, are very possible. The other team in the group is one whose unpredictability is similar to that of the West Indies—Sri Lanka. On a good day, they, like Pakistan, can amass 300 in 50 overs, but on a not-so-good day, they manage just 100 all out. Yet, as the 1996 champions they must never be counted out.

So what about the actual squad? Carl Hooper, after recent knee surgeries, returns as captain, and all West Indians must be praying that everything goes well with him in the recovery stages. Hopefully he will be fit in time, and modern medicine is on our side.

Chris Gayle, with his explosive batting and underrated but essential slow-cutters, was an easy pick, as was fellow opener Wavell Hinds, with his unorthodox batting style. Hinds will be useful for his medium-pace too—many teams play the "real" fast bowling better than the medium-pace. With the field restrictions in play, it is easier to score from the faster stuff than the slow-medium.

Marlon Samuels is maturing with every breath, and his clouting of the Indian bowlers in that final odi will be remembered for a long time. His bowling too, like Gayle’s, will be useful. Ramnaresh Sarwan and Shivnarine Chanderpaul will lend stability if the blasters falter. Ricardo Powell is another free hitter, but he too, like Samuels, is slowly learning that it is not necessary to hit sixes and fours off every ball.

A big question mark hung over Lara, but despite what has been suggested, I would always prefer him in the team. Lara is Lara—mercurial, yes, but also necessary for maturity in this team, especially if Hooper’s still doubtful.

Ridley Jacobs’ choice as the wicket-keeper-batsman was no problem, but the bowling certainly is. Merv Dillon has been, like his team, too inconsistent for his good, but again, for experience’s sake, has been included, and must now lead from the front. Jermaine Lawson’s inclusion was also easy, as was Vasbert Drakes’. Lawson is the future of West Indies’ fast-bowling attack, while Drakes’ experience in South Africa, as well as his recent exploits in India and Bangladesh, show that he is ready for the highest level.

The West Indies will be a good unit in the not-too-distant future, but the World Cup has come just too early in the development of many of these players. Consequently, they will have to work exceptionally hard if they are to progress from the pools to the Super Six. But miracles do still happen, even in these days of high technology and clones.