This Land Is Our Land...

It's a familiar story. The CPI(M) lays down one set of rules regarding SEZs for the UPA government at the centre, but follows just the opposite when it comes to West Bengal. Take Singur first, or now Nand 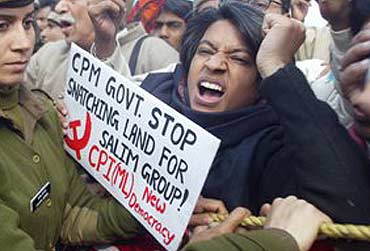 
Double standards must be second nature to the CPI(M). Consider this: in October 2006, it prepared a note along with its allies-- the CPI, the Forward Bloc (FB) and the Revolutionary Socialist Party (RSP) -- for the Congress-led UPA government at the Centre laying down a strict set of guidelines for acquiring land for Special Economic Zones (SEZs). SEZs, the CPI(M)-authored note said, should not come up in agricultural lands. Also, "livelihood security" for the displaced families should be ensured after paying them compensation "in accordance with the future price of their lands" (that is, the price their lands would fetch once they're developed and sold to units coming up in the SEZ). Most important, the note demanded that the UPA government to ensure that companies developing the SEZs "provide equity stakes to the land-losers".

The CPI(M), even while it was preparing the note, was surreptitiously planning to go ahead with acquiring 10,500 acres of land at Haldia in east Midnapore district (Nandigram, where violent clashes took place over the past week, falls in Haldia) without honouring a single clause of the note it wanted the rest of the country to adhere to. First, most of the land at Haldia is not only agricultural, but also fertile on which farmers cultivate many crops in a year. It has now transpired that the local CPI(M) strongman, Lakshman Seth (who is also the local MP and Chairman of the Haldia Development Authority), had announced that the government would pay Rs 4.3 lakh an acre to those who sell their lands voluntarily and Rs 3.4 lakh an acre to those whose lands are acquired through the administrative fiat. This is hardly adequate compensation--in Singur, where too the Marxists had run into strong opposition, the compensation amount was Rs nine lakh an acre. The Bengal government had no plans of ensuring "livelihood security" for the 8000 odd families who stand to get displaced from Nandigram block of the district. None worth the name had been offered to those who lost their lands at Singur. The money planned to be offered at Nandigram was definitely not the "future price" of the land--the controversial Salim group of Indonesia that's to develop the proposed multi-product SEZ at Haldia will sell the land to units that come to set up shop there at many times more than the throwaway rate of Rs 4.3 lakh an acre. And, the CPI(M)- led Left Front government in Bengal had no plans whatsoever to ask the Salim group to make the land-losers at Nandigram stake-holders in the SEZ. 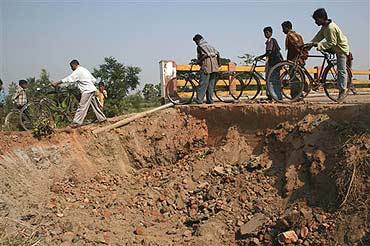 Worse still, even after CPI General Secretary A.B.Bardhan reminded the CPI(M) about this note, all that emanated from the red citadel was deafening silence. Clearly, for the CPI(M), what's applicable to the rest of India is not applicable to Bengal. In fact, CPI(M) General Secretary Prakash Karat admitted as much when, facing queries from media persons during the three-day central committee meeting of his party held at Kolkata last week, he said that conditions differ from one part of the country to another and a uniform policy may not always be feasible or advisable! What he meant was that the CPI(M) will follow one set of rules (or no rules at all) in Bengal while prescribing another set for the rest of the nation. Double standards? What are those?

Getting back to the issue of land acquisition that has assumed the dimension of a 'CPI(M) versus the rest of Bengal' fight here, it needs to be pointed out here that over the past 30 years (that is, ever since the Left Front came to power in Bengal), all land acquisition in the state has been opaque, under-hand and by force. Leave the exemplary land reforms carried out in the initial years of the Left rule when lakhs of acres of surplus land was re-distributed to the landless. It is a different matter, of course, that the reforms process was never carried forward by building a proper agricultural infrastructure like irrigation facilities, marketing networks, cold storages etc and, thus, returns from land have only dwindled over the years. But whenever land was required--be it for industrial estates or individual units, for schools, community halls, health centres, government offices, commercial zones and even housing estates, landowners (including lakhs of farmers) were forced to 'sell' their lands at whatever price, if any, the government (read: the CPI-M) thought it fit to give them. No opposition was tolerated and even a hint of defiance was crushed brutally by the party's considerable machinery.

The latest such example, and a glaring one at that, is Rajarhat adjoining Kolkata where thousands of acres of fertile farmlands and even waterbodies were, and still are being, acquired for a spanking new township, complete with IT parks, multi-specialty hospitals, entertainment and shopping malls et al. CPI(M) cadres forced farmers to sign sale deeds. Those who even dared to murmur protests at the meagre compensation that was offered--Rs 6000 per katha, as against the Rs one lakh onwards per katha the government has been selling it for after developing it--were threatened, beaten up and, in some cases, driven out of the villages. The residents of the villages where 'New Town Rajarhat' stands today have lost their livelihoods. The compensation amounts they received have, often due to lack of proper counseling, been blown away on electronic gadgets, two-wheelers and other pursuits and the people have been reduced to penury. There are many instances of farmers and their sons becoming daily wage earners and their womenfolk becoming maidservants in the posh apartment blocks that have come up on the very land they were proud owners of not so long ago. And to think that the CPI(M) has the audacity to talk about livelihood security and making land-losers stake-holders in projects that come up in their lands!

In Singur (where 997.13 acres had been acquired recently for the Tatas' small car factory), too, the CPI(M)--let me clarify here that for the Marxists, the government is but an extension of their party and so the two are the same--thought that it could silence all opposition the way it has been doing all these years. But things went horribly wrong. First, some farmers protested. That drew the attention of the media, especially Bengali news channels, which had a field day exposing as totally false the government's claims that the land being acquired at Singur was fallow or, at best, only mono-crop. And that, in turn, drew the attention of Opposition parties, especially the Trinamool Congress, which had been smarting under the humiliating defeat the hustings a few months ago. Other parties, including the BJP, the SUCI and the Naxalites, were quick to jump into the fray and organize the farmers of Singur to protest. 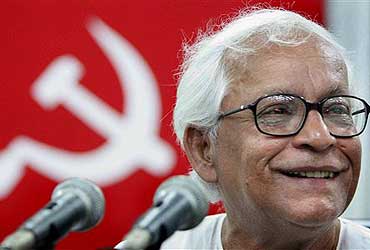 The CPI(M), finding itself cornered, deployed the police and its cadres to silence the opposition. Clashes took place inevitably and those, too, were highlighted by the media and drew quick condemnation from across the country, forcing Chief Minister Buddhadeb Bhattacharjee to backtrack. The compensation for Singur's farmers was raised and promises of jobs were also made. The 997.11 acres were ultimately fenced off, but Mamata Banerjee sprang a surprise by going on a hunger strike that, too, drew wide attention. Ultimately, the Chief Minister was forced to declare that henceforth, all land acquisition for industrial, commercial or housing projects would be transparent and done only after consultation with all parties, including the land-losers. But, nonetheless, the land at Singur was fenced off and the process of handing it over to the Tatas was started. Chief Minister Buddhadeb Bhattacharjee, in the face of stringent criticism, kept on repeating that the land at Singur would be acquired and there would be no going back on there. He had his way ultimately.

The CPI(M) thought Singur was an aberration. Haldia, or Nandigram, would be another matter. Secure, perhaps, in this belief and in that its stranglehold over Bengal remains intact, the party surreptitiously launched the land acquisition process at Haldia. The land to be taken over there was identified as early as September, when the permission for setting up the SEZ was sought from the union government, though it was kept under wraps initially. Rumours started spreading about the land acquisition. Some local CPI(M) leaders said only a portion of Nandigram would be acquired. Some of them declared that the government would pay Rs nine lakh an acre for the land there, only to be contradicted publicly by local CPI(M) MP and Chairman of the Haldia Development Authority Lakshman Seth that Rs 4.3 lakh an acre would be paid. This fuelled suspicion about the government's mischievous intent. 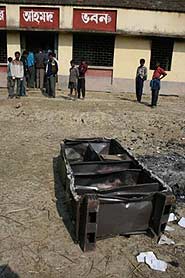 And when the Haldia Development Authority, on January 2, issued a letter to the Nandigram Block Development Officer identifying the land that would be short-listed for acquisition for the SEZ, the local people discovered that almost the entire block would be taken over. There was no controlling the anger from spilling over to Nandigram's dusty roads and lanes after that. On January 3, trouble erupted with a police lathi charge on locals who had attacked the CPI(M)-dominated panchayat office. Infuriated, the locals torched two police jeeps. A sad saga of violence followed that claimed at least five lives and left roads, bridges and buildings damaged and hundreds homeless.

Even then, the CPI(M) thought deploying its cadres would be enough to teach the locals a lesson. The tactic backfired and eventually, the Chief Minister had to admit the government and the party was to blame for the mess at Nandigram. The Haldia Development Authority's notice, he said, would be torn to shreds and the land acquisition process launched only after consultation with everyone. That, he said, could take a few months' time.

But it would be wrong to assume that the CPI(M), including the Chief Minister, has learnt any lesson. Or, at least, learnt the lessons that ought to have been learnt. Had that been so, the CM and his party would have not only promised to take the consent of all landowners before acquiring their lands and fair compensation to them, but would have also promised what it wants the UPA Government to implement-- livelihood security and making land-losers at Nandigram (and wherever SEZs would come up) stakeholders in the companies setting up the SEZs. That they haven't done so is proof that they haven't learnt any lesson and will continue to not practice what they preach.