'There Is No Dispute'

'...and any attempt to create a controversy on this issue would not succeed' argues the former DG of the ASI. While noted historian Ram Guha thinks that it is a media creation and that the media should avoid sensationalising every issue 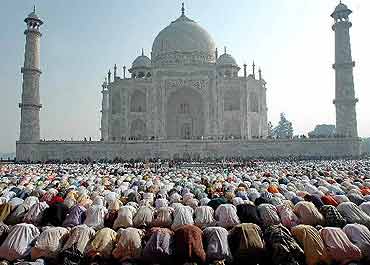 
Nagendar Sharma: Why are Indian history and historical monuments getting regularly dragged into controversies? The latest issue is that of the Taj Mahal

I think there is no dispute regarding the control of Taj Mahal, and any attempt to create a controversy on this issue would not succeed. Taj Mahal has been under government control since decades, and there was no controversy till now. In fact the historical claim of Sunni Waqf Board has many glaring mistakes in it. The board has based its claim on what emperor Shahjahan's historian Mullah Abdul Hafeez wrote. According to him, Taj Mahal was built in twelve years, but it should not be forgotten that the emperor had removed this historian from the post. The engravings on the gate of Taj Mahal say it took eighteen years to build this marvel. The facts are in Shahjahan's Badshahnama, which is presently in London, the Waqf Board would do well to read that first, before making wild claims.

Ramchandra Guha: I feel history and issues related with it are linked to social and political issues. Now this latest thing on the Taj Mahal, according to me, is a trivial issue. As it has been rightly pointed out, this historical monument has been under
government control for decades now. If Sunni Waqf Board or any other organisation feels aggrieved, they can approach the court of law and the issue would be settled once and for all. Similarly, let's remember that what Mr Advani wrote while visiting Jinnah’s mausoleum was just one line. What I am getting at is that media today is also trying to make news out of non-issues, making mountains out of molehills. Just because one organisation has made a claim on the Taj, you have this hysteria from the media about how the government would lose control and the Waqf Board is likely to get its ownership etc. Let me emphasise: the media should avoid sensationalising every issue !

BBC listener from Jalgaon (Maharashtra ) : Why are historical monuments in India badly maintained or not maintained at all? The latest controversy about the Taj is about ownership and not how to keep this world class treasure safe, and properly maintained. Many scams too have come to light in the name of maintaining the Taj...

Well, scams is a different thing. Today, as a follower of history and archaeology, my worry is about the absurd claims being made on our historical monuments. The statement of Waqf Board is dangerous, and if this is allowed, there would be no end to this. You live in Jalgaon, Ajanta caves are not far from you, if Neo-Buddhists stand up and say, since the king had named these for Buddhists, it should be given to us. Similarly, for Ellora. Pandits could claim that since they have been praying in Kailash temple in that complex, therefore it should be handed over to them. There is no end to such claims. But our historical monuments are national property and no religious or ethnic group should make such claims. I reiterate as an archaeologist, I am clear that the original documents regarding Taj Mahal are in a museum in London, in Shahjahan’s Badshahnama and it should be read first. Even if I were to accept the Sunni Board’s view that it is mentioned in Badshahnama, how would they prove that a Sunni Waqf Board existed during Shahjahan’s times?

Nagendar Sharma: Let us listen to what another well known historian prof Irfan Habib has to say on this issue...

Prof Irfan Habib : This is not a question of any religion or group.The status of any monument at the time when it was taken into control by the government is perpetuated. In the case of the Taj Mahal, there was no Waqf Board in 1904. The Ancient Monuments Act applies to historical monuments, and the status quo has to be maintained. It is up to the Archaeological Survey of India (ASI) to challenge the Waqf Board claim in the High Court. However, I feel it is the governments which allow rules made by them to be broken later on. My view is that the mistake of having allowed prayers in Babri Masjid is the root cause of such claims now coming up on monuments, which are clearly national property.

BBC listener from Kolkota: Does the ASI merely maintain historical monuments or does it do any research on these to allow the students and others interested in history know more about the monuments?

Well, no maintenance is possible without fully knowing about the architecture of any old and historical building. The ASI does in-depth study about all the buildings handed over to it. In fact sometimes we are frustrated by our own work as it is complicated and beyond the understanding of common man.

Nagendar Sharma: Mr Guha, you said a short while back that media should avoid sensationalising everything, but what is your view on frequent changes in history textbooks for schools. How do historians take this ?

Ramchandra Guha: My view is that governments should stay out of history textbooks. A famous historian in Kolkota Rudrangshu Mukherjee has said, "Cleo is an anarchist", meaning historians are of independent thinking and cannot work with governments, they have to have independence of thought. History cannot be changed with the coming and going of the BJP or the Congress -- political parties have to stay out of writing history. I say that schools should be given freedom of choosing which history books they want. We would have to end this practice of praising Shivaji when the BJP is in power and praising ancient kings when the Congress is in power.

I also feel that in India our style of teaching history is very boring. Who is interested in knowing what happened in 1500 and 1526? Instead of this, if we could tell students how the cities, towns and villages were in ancient times, how the houses were built and what people ate – such facts would generate a lot more interest in young minds than pure, plain and boring dates.

BBC listener from Shiekhpura (Bihar) : There are thousands of Muslim mosques under the control of ASI in India, where tourists are allowed but not the offering of the Namaz, whether it be the Red Fort mosque in Delhi or in Agra fort. On the other hand, Hindus are not prevented from praying in any of the ancient temples. Why is this?

My friend, organisations like the ASI are governed by clearly laid down rules, and we do not work on partial considerations. A little while back, I mentioned Ajanta and Ellora -- when the Hindus tried to pray there, the ASI officials physically pushed them out, and the same is true for Elephanata caves. No prayers are allowed in Konark. The question is not of Hindu or Muslim monuments, the guiding principle for us is that the status of such monuments, as it was on the day when they were acquired by the government for their maintenance, would be uniformly followed. Now, the Lucknow Imambara had a Waqf when it was acquired, so all religious activity is allowed there. Same is the case for Fatehpuri Mosque and Ajmersharief, therefore the considerations are not religious !

The best way to resolve such disputes is to fix a cut-off date on the status of any monument, so that no religious group can make wild claims, once the monument is being managed by the ASI.If on the day of acquiring, pooja or Namaz is offered there, then it should be continued, but if it is not so, then nothing can be allowed later on. The cut-off date is clear in case of Taj Mahal, and still if anyone wants to raise doubts, they would be cleared by the court of law. So far as religious feelings are concerned, my view is that god resides in our hearts. I am a Hindu, my Ram is in my heart -- it does not make much difference to me if someone fights over physical space in Ayodhya. Same is true for Allah, it does not matter, whether anyone allows Namaz in a particular Masjid or not.

BBC listener from Allahabad : Why can’t there be a law to stop religious organisations from making claims on historical monuments? I would also want to know why changes are made in history text-books on political considerations?

Ramchandra Guha: Let me answer the textbooks part first. I say governments should be kept out of the work of writing history books. NCERT can issue broad guidelines regarding the syllabi, certain controversies to be avoided etc, but the main thing has to be that schools have to be given independence to choose the textbooks, and the work of history writing should be given to independent agencies. I agree that there should be a law to check claims on historical monuments by organisations which base their work on religion and ethnicity. That is why I say decide a cut-off date on the control of historical monuments. Had there been such a date, turmoil in Ayodhya could have been avoided.

Nagendar Sharma: Mr Guha, why is it that history is chosen to be made into a centre of controversy?

Ramchandra Guha: There are two reasons for it. Politicians find it convenient to use historical events to divert attention from day-to-day issues concerning the common man, sometimes they succeed, at times they don’t. Secondly, we must not forget that unlike science, history cannot be seen in black and white, and there is a tremendous scope for interpretation, which also gets used at times to make it controversial.

A Summer Of Discontent