The Threshold Of Violence

There are an increasing number of votaries, on both the sides of the border, of the idea that violence and dialogue can take place concurrently, but it is crucial to recognize that terrorism remains a strategically useful tactic and strategy for its 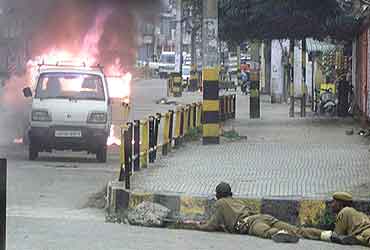 outlookindia.com
-0001-11-30T00:00:00+0553
Speaking in London on July 7, 2005, two days after the foiled terrorist attack at Ayodhya, Prime Minister Manmohan Singh said, that these incidents, "if they get repeated, have the potential to disrupt the peace process." While there appears to be no immediate threat of such disruption, its prospects may have to be re-worked into future projections, if terrorist actors continue to successfully execute incidents in Jammu and Kashmir (J&K) and elsewhere in the country, particularly in the light of fast-changing global realities and their impact on the trajectory of terror in South Asia. Immediately, however, the more worrisome aspect of trends is that the terrorist entities are able to consistently maintain a threshold level of violence despite the ongoing 'normalization' process.

Contrary to what some commentators are describing as the 'dramatic escalation' of violence in J&K, or the claims that troops "are barely able to contain the militants", the ground situation in the state, measured largely by the loathsome body-count, indicates that the past seven months have seen a relatively lower level of violence on point to point comparisons with the same period in previous years.

Addressing a press conference in the capital, Srinagar, on August 5, Chief Minister Mufti Mohammed Sayeed disclosed that terrorist-related violence had decreased by 25 percent in 2005. According to him, 1,217 incidents of violence had occurred in the last seven months, compared to 1,611 during the corresponding period last year. In first seven months of 2004, there were 41 suicide attacks and this year only 22 such attacks have occurred, Mufti disclosed.

The more recent and rather inordinate focus on J&K has primarily been the result of a series of high-profile terrorist incidents in Srinagar, as also the continuing hype with regard to the peace process. There has, of course, been a spike in violence in Srinagar. 89 persons, including 35 civilians and 30 SF personnel, have died thus far in 2005 (till July 31) as against 56 people in the corresponding period in 2004 in the Srinagar District. Among the major incidents of terrorist violence in the city during 2005 are:

July 29: In an attack at Budshah Chowk in the heart of the capital city, two SF personnel died and at least 18 civilians, including ten journalists, sustained injuries.

July 20: A Major of the Indian Army and two soldiers were among five people who died and 17 persons were wounded when a suspected suicide bomber rammed an explosive-laden car into an Army vehicle near Burnhall School in the high-security civil lines area.

June 24: Nine soldiers were killed and 21 others sustained injuries when their bus was blown up in an explosion caused by the terrorists on the banks of the Dal Lake.

May 12: Two women were killed and at least 60 persons, including 25 children, were wounded when terrorists lobbed a hand grenade targeting a patrol party of the Border Security Force (BSF) at the main entrance of the Tyndale Biscoe School in the Lalchowk area.

May 11: At least two persons were killed and 50 others sustained injuries when terrorists triggered a car bomb explosion in the Jawahar Nagar area of the capital. Over a dozen vehicles and approximately 40 shops, bank branches and residential houses were damaged in the blast.

April 6: A day before the bus from Srinagar to Muzaffarabad in Pakistan occupied Kashmir was to be flagged off, two Fidayeen (suicide squad) terrorists attack the Tourist Reception Centre which was accommodating 24 passengers. Both the terrorists were killed in the ensuing gun-battle and seven persons, including a policeman, were injured. 45 persons, including the passengers, were subsequently evacuated to safety

February 24: Three police personnel, a woman and two terrorists were killed and four persons sustained injuries during a fidayeen attack at the Divisional Commissioner's office.

January 7: A Deputy Commandant of the BSF, two soldiers, one policeman and a civilian were killed and four persons sustained injuries when two fidayeen attacked the Income Tax office. While one of the terrorists was killed on January 7, the other was shot dead the next day.

Being the capital city, Srinagar is, in a certain sense, an obvious target. In a city with a heavy security presence, inevitably, soft targets like schools, residential and busy commercial areas have borne the brunt of attacks in 2005. At the time of writing, official sources estimated that at least 85 to 90 terrorists were present within Srinagar and its suburbs. Their intent and capacities to target Srinagar is a consequence of the fact that the capital has been, quite naturally, the more public face of the efforts underway for the state's return to normalcy.

There is dramatic evidence of a return to a measure of normalcy in civic life, and increasing business activity, particularly in the tourism industry, the mainstay of the local economy. Domestic tourist flows into the Kashmir Valley, for instance, registered a record growth of 83 per cent during the first six months of 2005. More than 280,000 domestic tourists visited Srinagar between January to June 2005 as against a total of 358,000 visitors through 2004.

Another significant indicator of the levels of conflict is the scale of terrorist ingress. 15 Corps Commander, Lt General S. S. Dhillon maintains: "Until April this year, infiltration was below normal, perhaps due to heavy snow and the ongoing peace process. Between May and June, infiltration picked up and was slightly above normal. But this month [July] the intensity has been high..."

According to sources, between April 22 and July 15, 2005, approximately 40 infiltration attempts were foiled by the troops and 112 terrorists were killed during this period. In July 2005 alone, according to one report, there were more than 15 infiltration attempts, with 58 terrorists being killed. But increased infiltration attempts at this time of the year are not unusual, primarily due to melting of snow along the border. The 16 Corps Commander, Lt. Gen. Sudhir Sharma, underlined this 'routine aspect': "The desire to push in militants in large groups can only be explained on account of a backlog due to heavy snows this year. My assessment is, infiltration attempts will continue for at least the next two months. "

Border fencing and advanced detection devices, including Israeli ground sensors, have provided the troops an advantage in uncovering infiltration. However, as is their wont, the terrorists have chosen new and ingenious methods to traverse this obstacle. Army sources indicate that the infiltrators are now using difficult and inaccessible terrain as new routes. For instance, an Army patrol intercepted a group of infiltrators on July 12, 2005, in the Gurez mountains of Baramulla district in North Kashmir. The infiltrators had reportedly crossed the Line of Control (LoC) through a mountain pass, into the rocky and snow-covered region, at a height of approximately 16,000 feet. In the subsequent operations, at least 15-18 infiltrators were killed by the troops.

Infiltration through the Gurez sector has been rare, primarily because of the harsh terrain and poor weather conditions. And entry patterns have also reportedly changed. Infiltrators, conventionally, used to cross in small groups of four to five. In the current context, however, they are approaching the border in larger groups to deceive the troops. Explaining this, Deputy Inspector General of the BSF, S. Srinivasan, said the group is divided into three, while one of them take a direct route selected by the guide, another goes back to Pakistan occupied Kashmir (PoK) after giving firing cover to it (first group) and the third take another route to sneak into the Valley.

Furthermore, official sources said that terrorists are also attempting to enter India from Bangladesh and Nepal, to eventually travel to J&K. Drastic improvement in border management and the completion of fencing along the LoC has rendered ingress from Pakistan and PoK difficult, though not impossible. Consequently, cadres now also use the route from Bangladesh and Nepal, a route hitherto reserved for 'senior commanders' of the Jehad due to its relatively high cost.

Even as the number of terrorists killed has come down gradually (991 during January-July 2002; 845 in January-July 2003; 601 in 2004 and 645 till July 30, 2005), one of the crucial elements in the SF's summer operational strategy has been the number of terrorist leaders killed. According to sources, at least 72 of them have been killed in 2005. And this is a serious problem that the terrorist groups active in J&K are now facing: it is still not difficult to find foot-soldiers for the jehad, but it takes much more to replenish the loss of leadership on the ground.

While there has been a distinct reduction in the levels of violence, as reflected in most significant parameters, it is evident that the terrorists retain the capacities and potential to carry out major strikes in J&K and elsewhere in India. Defence Minister Pranab Mukherjee disclosed in Parliament on August 3, 2005, that recent reports indicated that a large number of launching camps along the LoC from Rajouri to Gurez Sector have been activated, where terrorists have been kept in readiness for infiltration. He also reiterated a point that was made by the Prime Minister and Foreign Minister earlier, that the logistic infrastructure of terrorist training camps inside Pakistan and PoK remain intact.

The machinery that sustains such levels of infiltration and controls eventual targeting in terrorist operations is also well in place. For instance, top Army officers have disclosed that there are 28 control stations functioning in PoK, in touch with approximately 1,113 radio sets in the Valley alone. The total number of messages being generated is anywhere between 13,000-15,000 intercepts every month. And, according to estimates, more than Rupees 53. 3 million passed through Hawala channels into terrorist coffers between January-July 2005, with the corresponding figure for 2004 estimated at Rupees 40.9 million. In short, the infrastructure to wage jehad - training, communications and funding - has been maintained in full measure across the LoC, despite Gen. Pervez Musharraf's repeated commitments to the contrary.

Notwithstanding the deligitimisation of terror and Pakistan's pre-occupation with its own conflicts on multiple fronts, almost 2,000 people succumb to terrorism-related violence in J&K annually--high by any standards, but appalling within a population of under eight million.

There are an increasing number of votaries, on both the sides of the border, of the idea that violence and dialogue can take place concurrently; that the extremists can continue with terrorist activity without prejudice to the peace process. While the peace dividend is yet to crystallize, it is crucial to recognize - however discomforting this may be - that terrorism remains, within this context, a strategically useful tactic and strategy.