The reasons why Delhi should not hold cricket matches were present in the more expensive pavilions, even though very few of them would have paid for it. 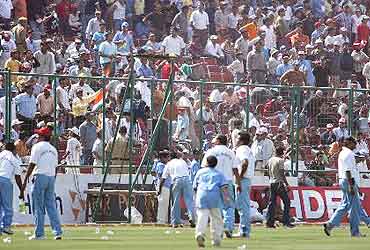 With due respect to the Delhi & District Cricket Association's very noble idea of building a world-class stadium in the national capital, it does not appear to be a very good idea to organise cricket matches in Delhi.

These sentiments have nothing to do with the organisational chaos in last Sunday's one-day match between India and Pakistan. The chaos was very much there. Overzealous security personnel quickly became overbearing and overactive to overdo their part. As underorganisation pitched in to contribute its two bits, people became so painfully conscious of their parched throats (inadequate drinking water) and baking skin (unfinished stands) that they should be forgiven for not enjoying the cricket.

However, the reasons why Delhi should not hold cricket matches were present in the more expensive pavilions, even though very few of them would have paid for it. Let's not take names here but Delhi's swish set -- politicians, fashion folk, businessmen, journalists -- was present at the stadium in all its grandeur. The clothes were carefully selected to flaunt or hide the body, depending on its state. The make-up was there, too, to hide. Reverse Swing could not help imagining how they would have looked, and behaved, without the clothes and the grooming.

They came early, came late, left early, stayed on, got to park their cars just outside the entrance, and largely did as their designer hearts desired. And they threw tantrums.

It was a funny sight to see a high-ranking police officer trying to placate a member of the power brigade who was sulking in a chair in the ninth row. He would have perhaps taken less time to agree to the cop's request to move to a row in front had he not been accompanied by some sidekicks, who were suitably impressed by the man's 'clout'.

Another policeman - middle rank, large middle - perspired much trying to cater to their needs. A third was seen carrying food packets to the front rows. Another government-type almost keeled over trying to ensure the comfort of a bunch of four, one woman and three men, one dressed in all whites and the rest in soft summer shades, which had walked in just after lunch. However, as if to stress his own importance, the government type (dark blue trousers, light blue shirt) let it slip casually that he had to rush for a meeting to the Taj Palace (a big five-star hotel in Delhi).

Clearly, the swish set was not there to see the game, nor anything else. It was there to show itself. Its members took particular care to ensure that they were, as often as possible, seen with the lot they wanted to be seen with. "What a life! Deriving glory out of being with someone. Why not try to be that other someone?" asked my friend.

One wouldn't have held the swish set's shenanigans against it had the match not been disrupted by spectators pelting bottles and other stuff into the ground. The deprived thousands who had braved the heat, walked long distances (the roads were blocked) and gone through several security frisks that were a bit more than molestation, couldn't have done it. They could not have carried anything inside. If they could have, the throats wouldn't have been parched. Who did it, then?