The Sweet Taste Of Victory

Dinesh Karthik hit a last over six as India halted their losing streak in South Africa by defeating the hosts by six wickets in their first ever Twenty-20 international clash. 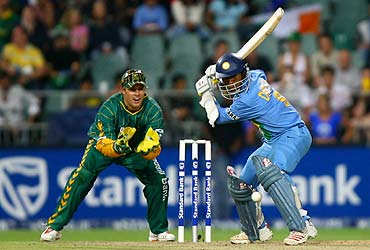 Dinesh Karthik hit a last over six as India halted their losing streak in South Africa by defeating the hosts by six wickets in their first ever Twenty-20 international clash at the Wanderers.

India needed nine runs off the last over when Karthik (31 not out) pulled spinner Robin Peterson over mid-wicket for a six to virtually seal a thrilling victory and then hit the winning run with one ball to spare to lift the sagging spirits of the struggling team.

This was the visitors' first victory of the tour so far after having conceded an unassailable 3-0 lead to the hosts in the five match one-day series, which had put them under immense pressure to perform.

The main contributors in the successful Indian run chase were stand-in skipper Virender Sehwag (34 off 29 balls), Dinesh Mongia (38 off 45) and Karthik (31 in 28).

India were off to a poor start again when Sachin Tendulkar (10) dragged a Charles Langeveldt delivery onto his stumps but then Sehwag and Mongia put the innings back on rails with a 43-run second wicket stand.

Sehwag (34) departed at 60 off to a brilliant run-out by bowler Langeveldt who flew in the air to break the stumps and catch the Delhi batsman short of his ground.

Sehwag looked ominous and struck five boundaries and one six before a terrible mix up with Mongia resulted in the run out.

India were soon dealt a blow in the guts when Mahendra Singh Dhoni played a Langeveldt delivery onto his stumps.

But Mongia and Karthik added a crucial 37 runs for the fourth wicket that steadied the Indian ship and moored it home.

Mongia then took the hosts' attack apart, hitting some big shots while Kartik played smart cricket, rotating the strike. Mongia blasted a six over extra cover off Albie Morkel that landed in the stands.

With 18 runs remaining off 14 balls Mongia, in search of a boundary, lifted left arm spinner Peterson and Langeveldt held on to the skier.

In the South African innings, Zaheer (2-15) and Ajit (2-10) were brilliant up front and had reduced the hosts to 41 for 4 by the eighth over, a situation which worsened further with swashbuckling Justin Kemp (22) falling leg before to Tendulkar.

India, however, received a jolt in the form of Agarkar tearing his right groin muscle in the middle of his third over. Home-bound after the one-day series, Agarkar has almost been ruled out of the last game on Sunday.

South Africa rested five of their regulars, including Jacques Kallis, Shaun Pollock and Makhaya Ntini, while India, searching for the first victory on the tour, fielded their full side.

South Africa lost their first wicket in Loots Bosman (1), when he edged Zaheer to Tendulkar in the slips. Agarkar then struck from the other end by claiming Herschelle Gibbs (7), caught brilliantly at short cover by  Raina.

A sizeable crowd turned up to soak in the pleasure of the match which was replete with cheerleaders and music playing in the background.

One of the innovations of the game was also witnessed when Harbhajan Singh bowled a no-ball and according to the rules, the next ball was to be a free hit.

Peterson hit it down the throat of the deep mid-off fielder but but he was found standing out of his crease after running towards the non striker's end when bowler Irfan Pathan took off the bails. Run out is the only way a batsman could be dismissed off a free hit in this format.