The States Of Denial

The wheel has turned full circle for the Naxalites and the Andhra Pradesh state government. But the Andhra 'experiment' affects other states as well. A false peace yields a bitter harvest, and when you add politics of votes to it, well... 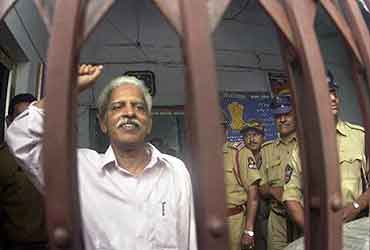 The wheel has turned full circle for the Naxalites and the Andhra Pradesh state government. On August 17, 2005, after months of policy vacillation, Chief Minister Y.S. Rajasekhara Reddy’s government imposed a ban on the Communist Party of India-Maoist (CPI-Maoist). A ban on the CPI-Maoist’s precursor organization, the Communist Party of India Marxist-Leninist – People’s War (better known as the People’s War Group) had been allowed to lapse on July 22, 2004.

This decision was evidently hastened by the brutal killing of the Congress Party’s Member of Legislative Assembly (MLA) from Makthal, Chittam Narsi Reddy, and eight others by Maoists at Narayanpet in the Mahabubnagar District on Independence Day, August 15. The dead included the legislator’s youngest son, C. Venkateshwar Reddy, Narayanpet Municipal Commissioner D.V. Ram Mohan and six others, who were participating at a public function to launch work on a cement road.

The ban has long been overdue – indeed, should never have been allowed to lapse. The Maoist used the interregnum of the ‘peace process’ and the lifting of the proscription to re-group, re-arm, and re-formulate strategies, which included the targeting of civilians and security personnel, and have successfully established an upper hand in the state, while the security forces tried to contain their activities with their hands tied by political fiat.

Suddenly wise, the state’s home minister, Jana Reddy, pronounced: "The Maoists have misused the opportunity given by the government and resorted to mindless killings, extortions and kidnap. They have killed 157 political activists, policemen, home guards and civilians in the last 13 months."

There has also been no-let up in extortion, and Chief Minister Reddy, in an interview to a television channel aired on May 21, 2005, stated that, "a rough estimate made by the department was, in the first five or six months we gave them an opportunity to talk and police action was suspended, a rough estimate is that about Rs. 50-60 crore (Rs. 500 to 600 million) has been collected by them and they did produce good weapons, they did plant landmines in a number of places." Philosophically, the Chief Minister added, "Well, it’s part of life and you get used to it."

If the Independence Day killings are any indicator, it may not be as easy for the Chief Minister to ‘get used to’ what the Maoists are planning in the coming months.

Far from being deterred by the ban, Janardhan, the official spokesperson of the CPI-Maoist ‘state committee’ ominously declared after the ban, "From now on, there will not be any peace zone in the state. We will strike in areas where CPI-Maoist is not strong. The state government will see bigger attacks from CPI-Maoist. The more the state tries to suppress CPI-Maoist party, the more we will attack."

In their strategy to establish dominance, the role of Maoist front or ‘over-ground’ organizations, including the seven proscribed on August 17, has been crucial. In a letter addressed to the former Maoist emissary in the peace talks, Varavara Rao, a ‘Politburo’ member of the CPI-Maoist, Cherukuri Raj Kumar alias Gangadhar was critical of the inability of the party leadership to encash the ‘favourable’ situation during the peace initiative. The letter seized from two couriers in May 2005, read "despite the situation turning favourable to us, we have failed to involve even a small section of people out of the lakhs who attended our meetings to agitate against government policies."

Further, according to 'The Strategy and Tactics of Indian Revolution', a Maoist document drafted at the time of the formation of the CPI-Maoist, three categories of mass organizations are prescribed — underground units which directly recruit people, as well as open and ‘semi-open’ organizations, which carry out revolutionary propaganda using the available legal opportunities and organize agitations openly to mobilize people and organizations that are not directly related to the Maoist party, but work under some cover with a limited programme.

The close coordination of objectives and programmes across these various organizations is illustrated by the recent arrest by the Nizamabad Police, on June 2, 2005, of CPI-Maoist ‘state Committee’ member, Ganti Prasadam alias Prabhakar and the former ‘District Committee Secretary’ of Cuddapah, Yamasani Surender alias Venkanna, along with four Revolutionary Writers' Association (Virasam) members at Arsapally.

The CPI-Maoist has now embarked on a programme to strengthen its various committees spread across different states – a process it had vigorously initiated during the period of the ‘peace process’ in Andhra. In order to ensure better co-ordination, the outfit is now focusing on consolidating a corridor connecting North Telangana Special Zonal Committee to Andhra Orissa Border Special Zonal Committee passing through the areas being held by Dandakaranya Special Zonal Committee, an area that stretches from Orissa to Maharashtra, covering the states of Andhra Pradesh, Chhattisgarh and Madhya Pradesh as well. This process has been enormously facilitated by the very long leash the organization was given by the Andhra Pradesh government for the better part of a year.

Unfortunately, Andhra Pradesh has a long history of politicians, cutting across party lines, hobnobbing with the Maoists and contributing directly to their consolidation and continuous expansion. In 1982, the then-leader of the Telugu Desam Party, N.T.Rama Rao described the Maoists as desabhaktalu (patriots) and annalu (elder brother), and secured their support in the elections in the following year to unseat the incumbent Congress government.

In 1989, it was the turn of the Congress party, under Marri Chenna Reddy, to seek and secure Maoist support in the elections. In recent times, it is the Congress-ally Telengana Rashtra Samithi (TRS) that has been accused of having arrived at a deal with the Maoists before the 2004 elections.

The Maoist influence over the TRS can be gauged by the fact that at least 500 of its elected members in mandals (local administrative bodies) and panchayats (village bodies) across Telangana resigned following an ultimatum issued by the former in June 2005. Among those who resigned on July 4, 2005, were five of its six ministers in the Andhra Pradesh government.

Unsurprisingly, the TRS has opposed the imposition of the ban, and TRS President and Union Minister K. Chandrasekhara Rao stated, "It will be in the interest of society, people and the government to lift the ban and restart talks." By these actions and statements, the TRS has secured a Maoist reprieve: on August 17, 2005, the Maoists issued a statement warning second-rung leaders of the Congress, Telugu Desam and the BJP not to take part in the municipal election campaign. Not surprisingly, the TRS has not been mentioned in the threat.

The Andhra government has evidently botched up its policy to contain the Maoist threat, complicating matters in the neighbouring states as well. Andhra’s northern neighbour, Chhattisgarh has, among others, suffered directly. Warangal Superintendent of Police, M.S. Ravindra, is in possession of copies of resolutions adopted in a meeting of the CPI-Maoist ‘central military commission’, sometime in February-March 2005, which indicate that, following the breakdown of the peace talks, the outfit planned an ‘intentional retreat’ and a shift of important cadres and top leaders to Chhattisgarh and other neighbouring states for safety.

During the period of the ‘peace talks’, a Central Reserve Police Force battalion had been shifted from Andhra Pradesh to Chhattisgarh’s Surguja district, but they had to move back into Andhra following the ban, affecting operations in Chhattisgarh. Chhattisgarh Director General of Police O.P. Rathore made matters clear: "It’s all Andhra Pradesh’s problem. In fact, Chhattisgarh’s Maoist problem is exported by Andhra Pradesh. They sometimes enter into a truce, sometimes impose a ban and, in the final analysis, Chhattisgarh suffers."

Significantly, the security preparedness within Andhra itself has been substantially undermined due to the state government’s ambivalence. Following Maoist attacks on the Durgi Police Station in Guntur district on May 10 and Kukunoor police station in Khammam district on June 6, state Police chief Swaranjit Sen said "at least one third of the Police Stations in the state are unarmed and vulnerable to attacks," adding that, out of 1,585 police stations, 500 do not have weapons and are not armed.

On July 30, 2005 at the Task Force on Naxalism meeting in New Delhi attended by the Nodal Officers of all the Naxalite-affected states, the union government reportedly decided to adopt a ‘zero-tolerance’ towards the various Maoist groups active across the country, unless they give up arms. Though such apparent efforts for a unified strategy to counter the Maoists would be a welcome change, the incoherence of response persists. The Task Force also maintained that the affected states could initiate talks with the Maoists ‘provided they are within the legal framework’.

Evidently, no lessons have been learned from the disastrous experience in Andhra Pradesh. As Chhattisgarh Chief Minister, Raman Singh, expressed it, "Some states want to hold talks with them (the Naxalites). Some would like to take a tough stand. Such individual policies are not going to help." Singh has been outspoken about the utter incoherence that currently characterizes responses, and has argued vigorously for a coordinated national approach: "state governments do know what to do… Delhi does not know what it is doing. This confusion must be cleared immediately."

Unfortunately, there is no evidence that the Andhra episode will not be duplicated in other states, or that unscrupulous politicians will not continue to strike deals with, and placate, the Maoists in future, as a means of wresting power.