So what explains the Sanjaya Malakar phenomenon on American Idol? It's obvious that his appeal transcends the Indian-American constituency. What gives? 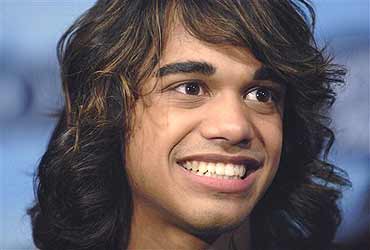 The blogosphere is aflame, the critics are cringing, the fans are effusive and the general population agog with the Sanjaya Malakar phenomenon in America. He is inspiring satires, Wikipedia entries and even questions to US presidential candidates. The charming but under-talented Indian-American has broken the last cultural barrier and landed firmly in mainstream America, in fact right on the pulse. He is being analysed, scrutinised, criticised and lionised all at the same time, matching Paul Wolfowitz in column inches and web space.

Sanjaya has made it to the top seven on American Idol, the most popular television show in the US, having survived round after elimination round. It is a singing contest judged by audiences -- close to 35 million votes come in every week – with just a little guidance from three real judges. The judges have repeatedly shown their distaste for Sanjaya, commenting on his uncertain abilities and off-key notes. Simon Cowell, generally acerbic but almost always right in his judgment, said he would quit the show if Sanjaya actually wins the crown. The show’s host Ryan Seacrest openly mocked Sanjaya last week, asking him to stand up three times as if he were going to be eliminated and then directing him to sit down. Wonder if the smarmy Seacrest, himself largely devoid of talent, would have treated one of the white or black contestants in the same condescending way.

But Ryan Seacrest is now only a bee buzzing around Sanjaya Malakar who is dominating the show much to the chagrin of judges, producers and supporters of other singers. Last week he sang a Spanish song for the "Latin Night," winning the approval of non other than Jennifer Lopez. Even Cowell was forced to say: "It wasn’t horrible." The thing is that the threshold for Sanjaya has been set so low, a credible performance is an improvement, while for the show’s top singers, Melinda DoLittle and Blake Lewis, it is very high because they have given professional, recording studio-level renditions in the past. If they can’t wow the judges every week, they are seen as dropping. It is one of those ironies working in his favour.

When Sanjaya and his sister Shyamoli were selected in the regional auditions, he was a fine choice among the hordes of wannabes who spoke rather than sang, screeched rather than carried a melody. Shyamoli was voted off quickly enough but Sanjaya kept on rising. Even when he made the cut to the last 24, he was fine and the judges voted for him. It was when he was found among the last 18, then 16, then 12, then 10 and then nine and now finally among the last seven, that tongues are wagging.

But Americans seem to love Sanjaya, baffling as it may be. Blog references to him jumped 338 percent in the first week of April and such is his name recognition that bloggers refer to him primarily by his first name. His fans call themselves "Fanjayas." Little girls tear up when he sings, adolescents find him cute (he looks vaguely like Zakir Hussein) and older people seem to have adopted him.

Whether it is his certain innocence or the wide, embracing smile, his weird hair-dos or snazzy outfits, Sanjaya has found a place in the American heart. They are voting more talented singers off the show in a crazy public subversion of democracy but keeping Sanjaya alive. Defiantly deficient, the brave little Indian American keeps on going, belting (or butchering) out songs. His hometown near Seattle was asked to declare a day in his honor to encourage him. He has gone well beyond the 15-minute of fame thing.

Initially I thought Indian Americans are mobilizing as armies of Fanjayas, voting in large numbers to keep the 17-year-old on the show. After all, most other barriers had been broken by the community. They were on Wall Street and on main street, in political parties and Silicon Valley, in government and in management, in hotels and motels, in medicine and in space. They were writers, analysts, advisers and policy makers. Perhaps the one last hurdle was for an Indian American to become a pop icon. When they saw Sanjaya, they felt he had a shot. 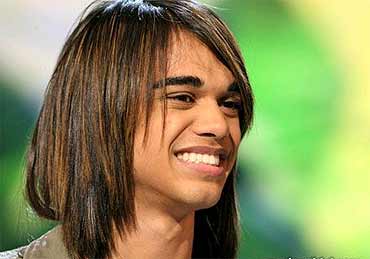 But as weeks went by and Sanjaya didn’t, I rejected my theory. Even if all of the two million Indian Americans voted, he wouldn’t make it unless others were voting for him too. Radio host and shock jock Howard Stern’s ploy of subverting American Idol by encouraging his listeners to "vote for the worst" may have mobilized many votes. But after a day of reading blogs, comments and articles on Sanjaya, I don’t think even that is reason enough for his continued presence among the finalists.

Sanjaya has touched a chord. Americans like him because he seems innocent and wholesome – he showed a clip of himself hula hooping in Hawaii on American Idol. (Now which American teenager today would publicly admit to doing the hula hoop?) Confronted by barely clothed singing divas and gun toting rappers on MTV, Sanjaya seems like from another world, an older world. When all pop news is about Britney Spears shaving her head or walking around drunk, along comes a young man who actually seems shy when answering questions. He is not the over-confident, brazen, entitled young person commonly found in urban America. 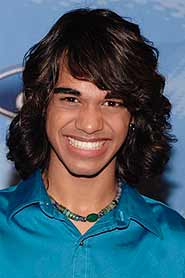 He also comforts the national heart when it is raining scandals in Washington. Not a day goes by without some outrageous revelation about a Bush Administration cabinet member to say nothing of horrendous mess in Iraq. In an isolating culture where television is often the solace, Sanjaya is the gentle doctor. And as MSNBC’s Helen Popkin pointed out, "While Sanjaya may be a below average singer, he’s rapidly gaining a more important role in history as an example of where the virtual world connects with the real. And he couldn’t have done it without You(Tube)."

A bit of background to further pull heartstrings in his favour – Sanjaya’s Indian father and Italian mother are divorced and at one time his father reported his earnings as zero and mother survived on welfare with the two kids.

Here’s is what I predict – whether or not he gets the crown (it would be a travesty, in my opinion, if he does), Sanjaya will be artfully manipulated by the music industry and a recording contract. Executives have seen his appeal among teens and tweens and they will jump to exploit it. His ability will become a secondary concern because music these days has architects, designers and painters who can add on massively to the original talent. Music is manufactured not merely recorded – remember the Spice Girls who were a sensational "creation?"

If that happens, Sanjaya will be rocking all the way to the bank.