The real aim is to change the regime in Lebanon and to install a puppet government. That's the main thing. Everything else is noise and propaganda. Full Coverage 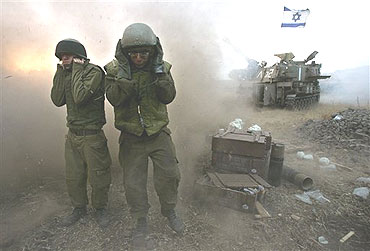 The real aim is to change the regime in Lebanon and to install a puppet government.

That was the aim of Ariel Sharon's invasion of Lebanon in 1982. It failed. But Sharon and his pupils in the military and political leadership have never really given up on it.

As in 1982, the present operation, too, was planned and is being carried out in full coordination with the US.

As then, there is no doubt that it is coordinated with a part of the Lebanese elite.

That's the main thing. Everything else is noise and propaganda.

On the eve of the 1982 invasion, Secretary of State Alexander Haig told Ariel Sharon that, before starting it, it was necessary to have a "clear provocation", which would be accepted by the world.

The provocation indeed took place - exactly at the appropriate time - when Abu-Nidal's terror gang tried to assassinate the Israeli ambassador in London. This had no connection with Lebanon, and even less with the PLO (the enemy of Abu-Nidal), but it served its purpose.

This time, the necessary provocation has been provided by the capture of the two Israeli soldiers by Hizbullah. Everyone knows that they cannot be freed except through an exchange of prisoners. But the huge military campaign that has been ready to go for months was sold to the Israeli and international public as a rescue operation.

(Strangely enough, the very same thing happened two weeks earlier in the Gaza Strip. Hamas and its partners captured a soldier, which provided the excuse for a massive operation that had been prepared for a long time and whose aim is to destroy the Palestinian government.)

The declared aim of the Lebanon operation is to push Hizbullah away from the border, so as to make it impossible for them to capture more soldiers and to launch rockets at Israeli towns. The invasion of the Gaza strip is also officially aimed at getting Ashkelon and Sderot out of the range of the Qassams.

That resembles the 1982 "Operation Peace for Gallilee". Then, the public and the Knesset were told that the aim of the war was to "push the Katyushas 40 km away from the border".

That was a deliberate lie. For 11 months before the war, not a single Katyusha rocket (nor a single shot) had been fired over the border. From the beginning, the aim of the operation was to reach Beirut and install a Quisling dictator. As I have recounted more than once, Sharon himself told me so nine months before the war, and I duly published it at the time, with his consent (but unattributed).

Of course, the present operation also has several secondary aims, which do not include the freeing of the prisoners. Everybody understands that that cannot be achieved by military means. But it is probably possible to destroy some of the thousands of missiles that Hizbullah has accumulated over the years. For this end, the army chiefs are ready to endanger the inhabitants of the Israeli towns that are exposed to the rockets. They believe that that is worthwhile, like an exchange of chess figures.

Another secondary aim is to rehabilitate the "deterrent power" of the army. That is a codeword for the restoration of the army's injured pride that has suffered a severe blow from the daring military actions of Hamas in the south and Hizbullah in the north.

Officially, the Israeli government demands that the Government of Lebanon disarm Hizbullah and remove it from the border region.

That is clearly impossible under the present Lebanese regime, a delicate fabric of ethno-religious communities. The slightest shock can bring the whole structure crashing down and throw the state into total anarchy - especially after the Americans succeeded in driving out the Syrian army, the only element that has for years provided some stability.

The idea of installing a Quisling in Lebanon is nothing new. In 1955, David Ben-Gurion proposed taking a "Christian officer" and installing him as dictator. Moshe Sharet showed that this idea was based on complete ignorance of Lebanese affairs and torpedoed it. But 27 years later, Ariel Sharon tried to put it into effect nevertheless. Bashir Gemayel was indeed installed as president, only to be murdered soon afterwards. His brother, Amin, succeeded him and signed a peace agreement with Israel, but was driven out of office. (The same brother is now publicly supporting the Israeli operation.)

The calculation now is that if the Israeli Air Force rains heavy enough blows on the Lebanese population - paralysing the sea- and airports, destroying the infrastructure, bombarding residential neighborhoods, cutting the Beirut-Damascus highroad etc. - the public will get furious with Hizbullah and pressure the Lebanese government into fulfilling Israel's demands. Since the present government cannot even dream of doing so, a dictatorship will be set up with Israel's support.

That is the military logic. I have my doubts. It can be assumed that most Lebanese will react as any other people on earth would: with fury and hatred towards the invader. That happened in 1982, when the Shiites in the south of Lebanon, until then as docile as a doormat, stood up against the Israeli occupiers and created the Hizbullah, which has become the strongest force in the country. If the Lebanese elite now becomes tainted as collaborators with Israel, it will be swept off the map. (By the way, have the Qassams and Katyushas caused the Israeli population to exert pressure on our government to give up? Quite the contrary.)

The American policy is full of contradictions. President Bush wants "regime change" in the Middle East, but the present Lebanese regime has only recently been set up by under American pressure. In the meantime, Bush has succeeded only in breaking up Iraq and causing a civil war (as foretold here). He may get the same in Lebanon, if he does not stop the Israeli army in time. Moreover, a devastating blow against Hizbullah may arouse fury not only in Iran, but also among the Shiites in Iraq, on whose support all of Bush's plans for a pro-American regime are built.

So what's the answer? Not by accident, Hizbullah has carried out its soldier-snatching raid at a time when the Palestinians are crying out for succor. The Palestinian cause is popular all over the Arab word. By showing that they are a friend in need, when all other Arabs are failing dismally, Hizbullah hopes to increase its popularity. If an Israeli-Palestinian agreement had been achieved by now, Hizbullah would be no more than a local Lebanese phenomenon, irrelevant to our situation.

Less than three months after its formation, the Olmert-Peretz government has succeeded in plunging Israel into a two-front war, whose aims are unrealistic and whose results cannot be foreseen.

If Olmert hopes to be seen as Mister Macho-Macho, a Sharon # 2, he will be disappointed. The same goes for the desperate attempts of Peretz to be taken seriously as an imposing Mister Security. Everybody understands that this campaign - both in Gaza and in Lebanon - has been planned by the army and dictated by the army. The man who makes the decisions in Israel now is Dan Halutz. It is no accident that the job in Lebanon has been turned over to the Air Force.

The public is not enthusiastic about the war. It is resigned to it, in stoic fatalism, because it is being told that there is no alternative. And indeed, who can be against it? Who does not want to liberate the "kidnapped soldiers"? Who does not want to remove the Katyushas and rehabilitate deterrence? No politician dares to criticize the operation (except the Arab MKs, who are ignored by the Jewish public). In the media, the generals reign supreme, and not only those in uniform. There is almost no former general who is not being invited by the media to comment, explain and justify, all speaking in one voice.

(As an illustration: Israel's most popular TV channel invited me to an interview about the war, after hearing that I had taken part in an anti-war demonstration. I was quite surprised. But not for long - an hour before the broadcast, an apologetic talk-show host called and said that there had been a terrible mistake - they really meant to invite Professor Shlomo Avineri, a former Director General of the Foreign Office who can be counted on to justify any act of the government, whatever it may be, in lofty academic language.)

"Inter arma silent Musae" - when the weapons speak, the muses fall silent. Or, rather: when the guns roar, the brain ceases to function.

And just a small thought: when the State of Israel was founded in the middle of a cruel war, a poster was plastered on the walls: "All the country - a front! All the people - an army!"

58 Years have passed, and the same slogan is still as valid as it was then. What does that say about generations of statesmen and generals?

'We Need To Be Led By The Evidence'