'The Protection Of The Honest'

'Decision making in a world of uncertainty is a highly risky operation and some decisions which appear sensible ex ante may ex post turn out to be faulty... [T]he fear of the unknown must not lead to paralysis in decision making' 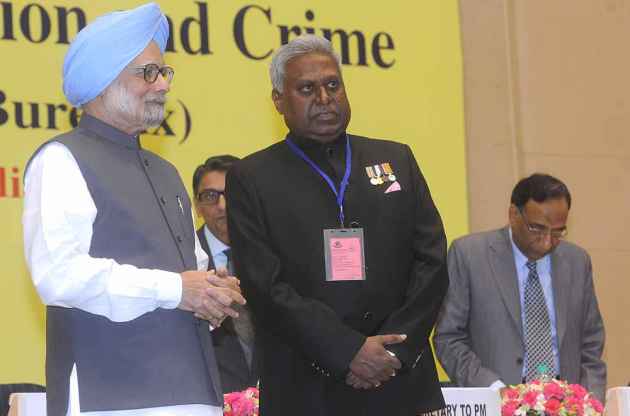 Let me begin by extending my very warm greetings to all ranks of the Central Bureau of Investigation in its Golden Jubilee year, and also to all those who have been associated with the organization in the past. I also extend a very warm welcome to our guests from abroad who are participating in this international conference.

In the last 9 years I have now participated in this conference 6 times. Also, this is the 3rd consecutive year that I am addressing this event. I must therefore confess that it was a little difficult for me to decide on what to say to this distinguished gathering. What could I say to you which I have not said before or which you do not already know as experts in investigating of corruption cases? After a great deal of thought I decided that I would flag certain larger issues about the debate on corruption and related matters that our country has been witnessing.

But before I proceed further, a few words of congratulations to the very fine officers who have received medals today and also some remarks about the work of the Central Bureau of Investigation (CBI) and the structure of this conference. The six officers whose work has been honoured today are examples of what we can achieve with hard work and determination. I wish them even greater success for the future.

The CBI has now completed 50 years of its existence. Though conceived as an anti-corruption agency, it has consistently been asked to investigate complex crimes as well, particularly those which have national or inter-state ramifications. It has contributed significantly to our efforts to contain and punish cases of corruption and other serious crimes. I compliment the agency for its achievements.

Some questions have come up recently about the legality of the CBI. Our Government will look into this matter seriously and promptly. This is a matter that will undoubtedly have to be considered also by the highest court in the land. The Government will do all that is necessary to establish the need for the CBI and its legitimacy, and protect its past and future work.

I understand that the structure of this conference would be a departure from the past. The session-wise themes would cover the entire mandate of the CBI and not only anti-corruption efforts, as was the practice in the earlier conferences. I am also happy that other law enforcement agencies of the country as also international and national experts from a range of area, representatives of Public Sector Units, Industry and Non Governmental Organizations have also been invited to participate in this conference. This reflects the need that the fight against corruption should be a collective national effort of diverse stakeholders, and should not only be confined to investigation and prosecution of corruption related offences once they happen.

The economic reforms of the 1990s followed by periods of fast economic growth have brought about rapid changes in our country’s economy. This process of change will continue in the future as well, as our economy continues to grow and expand. The march of globalization driven by quick advances in technology is breaking down geographical boundaries. There is a growing exchange of people, ideas, goods, services, capital and data across the country and across national boundaries. These powerful forces of change that are instrumental in creating greater prosperity are also throwing up new areas of crime and corruption as also adding to the complexity of the existing crimes. As I have said on an earlier occasion, the answer to this complex set of issues is in emphasizing even more the need for reforms together with better regulation. I hope this international conference with the theme Evolving Common Strategies to Combat Crime and Corruption will help the participants enhance their understanding of transnational crimes and corruption.

To keep pace with the aspirations of the people for clean and transparent governance and also deal with the increasing complexity of economic offences, our government has taken several legal and administrative measures in the last 9 years. I would not take your time in listing all of them but I would mention a few like the Right to Information Act, initiatives to enact the Lokpal and the Lokayuktas Act and to amend the Prevention of Corruption Act and the Delhi Special Police Establishment Act, the Public Services Delivery Bill, and administrative steps to reduce discretionary powers of public servants and ensure expeditious disposal of disciplinary proceedings. The point I wish to make here is that we now have a framework in place to curb corruption and increase transparency and accountability in public administration. I hope that in the time to come we will be able to make effective use of this framework.

In the public debate on corruption in our country it is sometimes forgotten that economic growth also implies greater opportunity for corruption. It is important, therefore, that we look at the issue of corruption in the correct perspective. While we must maintain utmost vigilance in preventing corruption and do our utmost in ensuring transparency, accountability and probity in public life, it is also important to ensure that the work of nation building goes on at a reasonably fast pace. I think our public debate needs to concentrate a little more on what it would take to make our progress even faster. I think it needs to concentrate more on how to improve infrastructure, how to improve the delivery of public services and how to build institutions. It also needs to concentrate more on the achievements that we can legitimately be proud of. We can`t be all the time just running down institutions of governance because there have been some cases of wrong doing.

As you all know, under our Constitution, maintenance of public order, which would include prevention, detection and prosecution of offences is the domain of the Executive. The police and the investigation agencies therefore, are a part of the Executive and must function under its administrative supervision.

This brings me to an issue which has made much news in the recent months- that of autonomy of the CBI, and generally of the police. I think it is very important to remember that under the law, the police enjoy complete autonomy in the matter of investigation of offences and no one, other than a superior police officer, can interfere with such investigation.

I would also like this gathering to reflect on the issue of autonomy of a police organization. Autonomy in investigation is already guaranteed. If anything more needs to be done to further insulate the investigative process from external interference, we must not hesitate to do it. But it would be worthwhile to introspect if the debate on autonomy should lose sight of the fact that the CBI and other investigating agencies are part of the Executive. We should be able to clearly distinguish between operational autonomy and the rules of oversight, supervision and control in organizational and institutional matters that are normal for public bodies of the Executive funded by public money.

That the debate on autonomy has acquired political overtones is indeed unfortunate. What is almost as distressing is that sensitive investigations are increasingly becoming subjects of running media commentary, often on the basis of material that is not otherwise in the public domain. No one can appreciate better than this gathering of experts that confidentiality is in the interests of the integrity of an ongoing investigation. This was precisely the thought process behind exempting the CBI from the RTI Act. I hope that, as responsible professionals, you will be able to reflect on this issue in the correct perspective.

Over time, investigating agencies in our country have been increasingly enquiring into administrative decisions and also matters relating to policy making. Such cases require great care in investigation. While actions that prima facie show malafide intent or pecuniary gain should certainly be questioned, pronouncing decisions taken with no ill-intention within the prevailing policy as criminal misconduct would certainly be flawed and excessive. Policy-making is a multi-layered and complex process in the government, and will increasingly become more so, and therefore I don’t think it would be to appropriate for a police agency to sit in judgment over policy formulation, without any evidence of malafide.

In order that public servants may not be paralyzed in taking effective decisions based on their own sound judgment and on the apprehension of an ill-informed inquiry or investigation, it is necessary that lines of confidence be clearly drawn between investigating and police agencies on the one hand and honest executive functionaries on the other. Indeed, “the protection of the honest” is a facet of Article 14 of the Constitution of India and is an obligation chargeable on the State. It is with this in view that the Prevention of Corruption Act (Amendment) Bill, 2013 has been introduced in the Parliament, to amend a provision which presently criminalizes, even in the absence of any mens rea, any action of a public servant that secures for any person a pecuniary advantage.

It is also important that errors of judgment are distinguished from criminal acts. As I have said on earlier occasions, decision making in a world of uncertainty is a highly risky operation and some decisions which appear sensible ex ante may ex post turn out to be faulty. Our administrative set up has to be so managed that the fear of the unknown must not lead to paralysis in decision making.

A trained mind is necessary for discovering criminality. When a charge sheet is filed, the charge sheet must go through rigorous process of scrutiny and there must be a high chance of securing conviction in that case. This highlights the need for greater professional expertise in the CBI, including from non-police organizations. I have touched upon this subject earlier also but this is something that is well worth repeating.

Even as the CBI strengthens its capacity and effectiveness, it must also work not only to strengthen the State Anti-Corruption Bureaux but also the State CIDs and Economic Offences Wings. I am therefore happy that the CBI is considering setting up a Centre of Excellence that will build knowledge partnerships with leading national and international institutions in the fields of investigation, prosecution, technology, forensics and management. This is an excellent initiative and I commend it.

Let me end by wishing this conference all success. Great importance attaches to your recommendation and I wish the CBI even greater success in its endeavors in the time to come.