Who decided what various Hindu gods and goddesses ought to look like? Who gave them sublimely beautiful human form, making them divine yet accessible? Hint: the same gentleman also made art accessible by beginning to publish prints... 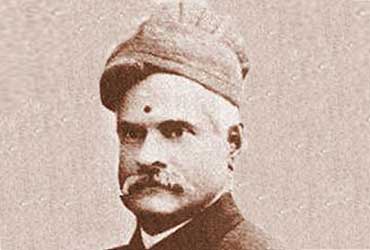 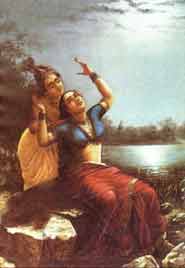 Ever wondered who decided what our various gods and goddesses ought to look like? Chances are that most of the images of gods and goddesses in the collective psyche of all living Hindus of India, and probably every framed print that your grandmother worships, owe their origins in Raja Ravi Varma's paintings. How many of us know that these are actually copies, and perhaps garish copies, of the works of a bonafide artist? As many perhaps as would know that Happy Birthday is a copyrighted song or know of the writer?

Raja Ravi Varma (RRV) that prince among painters and a painter of princes, was showcased by the National Gallery of Modern Art in Mumbai recently. The royal Gaekwad collection that was displayed for the first time publicly highlighted a blossoming trend towards owning RRV in the art mart. 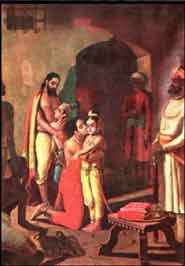 Since the 90s in particular, RRV's art -- rip-offs of which have adorned calendars and paan shop posters for as long as most living Indians may remember -- has increasingly become a must-have for everyone from art collectors to NRIs. As only a few paintings are available, prints and oleographs have proliferated. His name was in news again with the seizure of 10 of his original paintings from the reputed auction house Bowring's in March; their petition seeking return of which was rejected by Delhi High Court only on May 7.

Almona Bhatia of indiaartmart.com says that in `99 when she set up her site, RRV oleographs were the highlight and have continued being so till today. A print could sell for as much as $250 and even more if it is rarer like, say, the paintings of Maharajas for instance. She sells four or five every month to buyers the worldover. His paintings are rarely available but would go for Rs 10-12 lakh, according to her. Vikas Kamat of Kamat Potpourri, a site dedicated to Indian culture, says that he is always receiving enquiries about where RRV prints can be bought from. 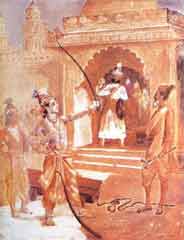 But such popularity has returned to RRV's work after decades of vilification and near elimination from public memory. RRV was so popular in his times and after (he lived between 1848 -1906) that he became a generic brand of sorts, much like Xerox is to photocopying or Band-Aid is to medicated plaster. So everyone and anyone felt free to get 'inspired'. Imitation might be the highest form of flattery, but when done by those lacking with any aesthetics, the garish reproductions, which are more widely seen than the originals, are partly responsible for the derisory perception of the artist's actual work. As Kamat says, a lot of Indians take RRV for granted, much like we do with Kalidas or Vyasa so we don't think about the person behind these works.

But that is only half the woe. By the first half of the century, the progressive art movement had set in, in India. The progressives dismissed RRV as "cheap, popular and sentimental" and he was considered "kitschy and not modern enough for using European portrait techniques in Indian art which till then was two-dimensional" according to Bhatia. His realism, which was a break from the highly stylized contemplative Indian tradition, has been accused of  "treachery and betrayal". Not to mention the sacrilege of using oils instead of gouache and tempera, the traditional Indian mediums. Because he painted Indian figures in European style, they accused him of spawning a "bastard" tradition. The artist's image, and hence market, took a further beating. 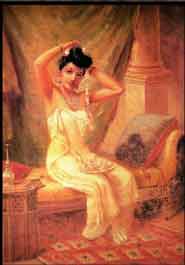 Even today, opinion on RRV swings both ways vehemently. Some wax eloquent on his sophistication and representation, his eye for detail and texture, his portrayal of character, calling him a master of colour while others, like artist Arpana Caur, see his work calendar-like and his women either idealized or turned into objects of desire with their clinging saris. Could it probably be because among the common masses his work had been internalised, while painters, connoisseurs and trend-setters tend to have varied opinions in different periods? For almost four decades till the 90s there were few conscious purchases of RRV's works or prints until international houses like Christie's and Sotheby's brought public attention back to him. 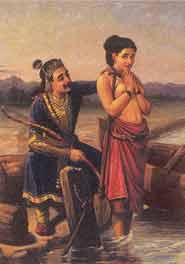 Appreciating RRV may require a fair look at the context of evaluation. One must remember that RRV painted more as a craftsman than a philosopher-painter who made art the medium for his words and thoughts.  Belonging to and painting for royalty may have been responsible for taking him even further into genteel life. But it is impossible to deny RRV's influence and shaping of at least the mass media representation of Indian culture. His images of women, dismissed by many, were and continue to be found on agarbatti packs, fabric labels and match boxes. His paintings of the epics, and figures from mythology, find their vision in the special lighting that made goddesses out of heroines in the early Indian films as well. A recent Indi-pop number, meri chunri uR uR jaaye, by Phalguni Pathak opens with a svelte woman literally walking out of an RRV painting of Shakuntala.

If he painted the original clinging sari, it was his fascination for the charms of the colours and folds of this piece of apparel in Bombay where he lived many years. In his days women in Kerala, his home state (and many other areas too) did not wear saris. His work may well have played a role in making it the national/traditional dress of the Indian woman, or at least bringing it to Kerala. From painting women in Saris then to Saris painted with RRV motifs now seems just a natural progression. Only recently, designer Satya Paul and Shubhangini Raje Gaekwad have taken motifs and ideas from the traditional heavy Chanderi saris that RRV painted on his royal sitters, and combined them with summer friendly materials like georgettes, tissues and jacquard crepe de chines. The saris have stepped out of the paintings. 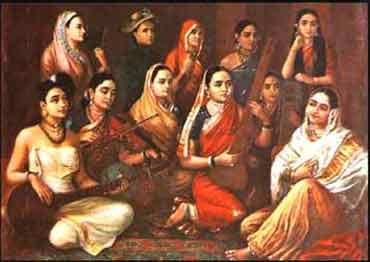 And one can not really over-emphasise his breaking from the then Indian tradition in using human form to give shape to his vision of the gods. By portraying deities such as Krishna and Rama as sublimely beautiful human beings in everyday attire, he made the gods seem divine yet accessible. Little wonder that Hindus, since then, have visualized their gods very much the way he depicted them. It is a different matter that calendar-artists in India, identified with his individual genre, may have distorted that pristine visualisation of aesthetic beauty that was a hall-mark of his work.

But it was not just the gods that RRV made accessible. He did the same to art by publishing prints. He set up a colour printing press first in Mumbai, and then moved to Lonavala, with the then latest printing equipment and techniques.Art, mainly in the form of gods and goddesses, thus moved out of the elitist quarters and became affordable for the masses.

Traditional yet modern, beautiful yet realistic, god-like but of human form, his portraits deliver this versatility and universality which is a simple yet refreshing change from buying into the angst of artists.

Georgie On My Mind