'The Police Had To Open Fire In Self-Defence'

'There is high tension prevailing in the area but the situation is currently under control. Police camps have been set up in the disturbed area. Senior police officers are also camping and making efforts to restore peace.' 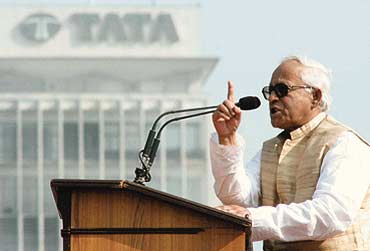 Statement by Chief Minister, Buddhadeb Bhattacharya in the West Bengal Assembly on March 15, 2007

A proposal for setting up a mega-chemical hub and a multi-product Special Economic Zone (SEZ) over about 10,000 acres of land in Nandigram Police Station of Purba Medinipur district was under consideration of the state government. Though no final decision has yet been taken about the exact location of the projects, on December 29, 2006 an informal notice for public information regarding likely location of this project was circulated y the Haldia Development Authority to all blocks and Gram Panchayat offices of the area. This notice was by way of information only. No specific location of the project had yet been decided by the state government. Once this notice reached various block offices, there was massive resentment among those people who feared that their land would be acquired. A number of political organizations and parties formed a Bhumi Uchhed Pratirodh Committee. On January 3, 2007, an unruly mob of about 3,000 people attacked a police party under the charge of officer-in-charge, Nandigram police station and set fire to a police jeep. In another incident on the same day, another police jeep was set on fir a Garchakraberia Bazar, 23 police personnel also received injuries in these clashes. Three cases were registered in Nandigram police station over these incidents.

There incidents were followed by several meetings between the administration and the opposition parties in which it was clarified by the district administration that no notification for acquisition of land had yet been finalized. In spite of that, local feelings ran very high and a bandh was declared in Nandigram police station area on January 4, 2007. Following this, peace meetings were held in several places of Nandigram police station on January 6, 2007, but even after the meetings, the situation turned violent. In the night of January 6/ January 7, 2007 there was a major clash between two groups - one owing allegiance to the Bhumi Uchhed Pratirodh Committee and the other owing allegiance to the ruling Left Front. In this clash, four people, who were residents of various villages of Nandigram police station, were killed and two separate cases were started over this incident. This was followed by ransacking of CPI(M) Party Offices at several places and incidents of violence and arson at the residence of several local leaders of the CPI(M). The agitators also damaged many bridges and culverts and dug up several roads as a result of which, the movement of vehicles became impossible after January 7, 2007.

In a series of peace meetings convened by the district Magistrate, Purba Medinipur over this issue starting from January 8, 2007 it was unanimously decided that all parties would take necessary steps to restore peace in the locality and police camps would be set up at the disturbed places. Despite these resolutions, however, it was not possible to repair the damaged roads, culverts and bridges and it was also not possible to deploy the state police within the affected parts of the Nandigram police station. Despite several measures initiated by the district administration to restore peace, execution of all government projects and schemes came to a standstill since no government officer was allowed to enter the affected areas. Gradually, a number of people owing allegiance to CPI(M) had to move their places of normal residence in Nandigaram police station and take shelter in several temporary camps at Khejuri. Tension between the two rival groups kept on mounting. There were several incidents of violence between February 03, and February 06, 2007 in which fire was exchanged or bombs exploded between the rival groups. On February 07, 2007 a sub-inspector of police, Shri Sadhu Chatterji had gone to investigate a report received about destruction of road communication. He was waylaid by an unruly mob and killed. His dead body was recovered only on February 10, 2007. Over this incident also, a case was started but all these cases could not be investigated properly because the police was not able to enter the affected areas.

On February 11, 2007, the chief minister in a public meeting at a place close to the affected area made an open commitment that no land for setting up the chemical hub and SEZ would be acquired at Nandigram if the people of Nandigram were against such acquisition.

However, sporadic incidents of violence involving displaced people in the caps at Khejuri and the people of Bhangaberia and Sonachura areas of Nandigram police station continued. It was resolved in one of the peace meetings that both parties would maintain peace during the Madhyamik Pariksha (Class-X) which was going on. The Madhyamik Pariksha was over on March 5, 2007. The district magistrate, Purba Medinipur again convened an all-party peace meeting. In this meeting he proposed that peace should be restored, police should enter the affected areas of Nandigram police station, damaged bridges and roads should be repaired and normalcy restored to the entire affected areas. However, the representatives of the Trinamool Congress and the Indian National Congress did not attend this meeting.

It was decided that this law-less situation in Nandigram and its surroundings should not be allowed to continue, the damaged roads, bridges and culverts should be repaired without any further delay and police should be take up the investigations the cases of the murder. Thereafter, police force was mobilized and it was decided that the force would enter Nandigarm through there separate routes under the leadership of senior offices. The police force was asked to exercise utmost restraint. They were further directed to use loud hailers to explain the purpose of the movement of the police party to the people of that locality which is to establish peace and restore normalcy. Ultimately, the police movement started about 10.00 a.m in the morning of March 14, 2007.

While one of the police parties could move into Nandigaram without any resistance two other police parties were confronted by large gatherings of hostile people. When the police asked them to disperse, they paid no heed and resorted to heavy brick-batting causing injury to some policemen. To disperse the mob, police lobbed tear gas shells. The mob them became more agitated and started hurling bombs followed by opening of fire. A few policemen sustained splinter injuries. To control the situation, police initially fired rubber bullets, but this, again, yielded no results. Ultimately, the police had to open fire in self-defence causing dispersal of the mob. This incident took place near Bhangaberia bridge.

Another police party also met with violent resistance at Adhikaripara where heavy brick batting, bomb throwing took place. As a result, some policemen were injured. In both the incidents, 12 policemen including Additional S.P, Tamluk and Assistant S.P. (Probationer) received splinter injuries and injuries due to brick batting. Serious and extensive injuries could be avoided as all the policemen were in protective gear. However, a number of people were injured in the police firing and it is believed that some of the agitators were also injured by the bombs that they were hurling.

Till 8.00 p.m on March 14, 2007, according to the report received at the State Headquarters, 14 people died including some critically injured people who succumbed to the injuries. In addition, there were 63 injured people of whom 29 were shifted to Tamluk district hospital for treatment. 5 people were released after treatment to minor injuries and the rest were still at Nandigarm Rural Hospital to receive treatment or awaiting transfer to Tamluk Sub-divisional hospital. This is in addition to the 12 policemen injured in the incident who received medical attention separately.

Following the above incidents, there was no further organized resistance to the movement of the police party who were now able to move to Sonachura and establish a temporary camp there. Police was also able to reach a few other neighbouring villages. In course of police search, 8 illegal fire-arms were recovered which had probably been used against the police party.

There is high tension prevailing in the area but the situation is currently under control. Police camps have been set up in the disturbed area. Senior police officers are also camping and making efforts to restore peace.

Where Will It End?