His album Teheran Nights is banned in Iran because it is deemed to stray too far from traditional music. But here he is for the fourth time in six years.

His album Teheran Nights—a funky, electronic take on traditional Iranian Sufi music—is banned in Iran because it is deemed to stray too far from traditional music. Despite this, Pedram, in town to perform at Jahan-e-Khusrau for the fourth time in six years, is happy making his own unique music. 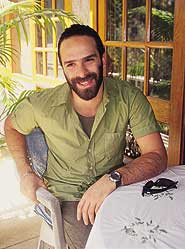 You’re here with the Rumi Group, but you also perform with other groups, correct?
We have two bands, one of which is the Rumi Group. It is a traditional Iranian music group that uses the poetry of Rumi for lyrics, along with many Iranian instruments like the santoor; there’s no electronica and the vocals are a very important part of the performance. Our other music is more fusion—we try to combine traditional Iranian sounds with more electronic and contemporary music.

How has the response been to your experimentation? Isn’t Teheran Nights banned in Iran?
It is. It is very difficult in Iran, especially nowadays, for musicians. I recorded in studios in Teheran, but the mixing of the album had to be done in Paris. People are curious about our music, and interested in hearing it, but there just isn’t the space or the freedom to do so.

How did your album make it to India then?
I met Achille of Silk Road Music and Deep Emotions Music Publishing when I was in Delhi performing at Jahan-e-Khusrau in 1999. I was playing some music at his neighbour’s house in Nizammudin East, and he and his wife heard us, got out of bed, and came over to find out who was playing. Seven years later, Silk Road has released Teheran Nights! I love this country.