The Prime Minister's Lahore visit is being trumpeted by our TRP driven media as a 'Masterstroke' and a great diplomatic breakthrough. But what does it really signify? 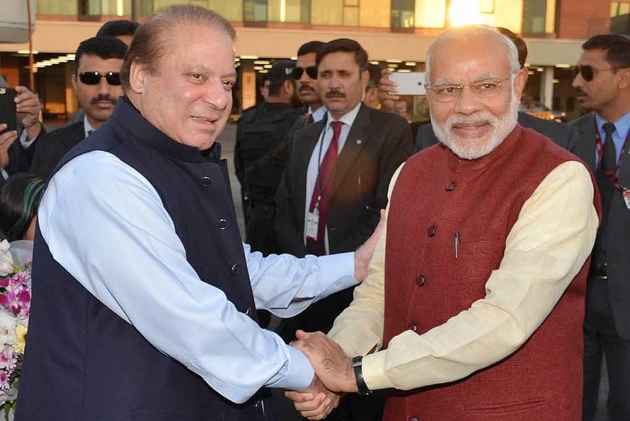 On 22nd August this year the Foreign Affairs Minister Sushma Swaraj said that NSA level talks between India and Pakistan can only be on the issue of terror, as agreed upon in UFA, and not about Kashmir. What has changed since then to cause all this new bonhomie, fanfare and hoopla, and this U-turn?

I know this will be pouring cold water on the outpouring of exuberance and exhilaration at this 'breakthrough' and damping many squibs, but my own assessment is this.

I submit that the present Government of India has been a total failure on all fronts, economic, social and political, and so its leadership wants to divert attention from these failures and project an image of wise statesmanship and sagacity to stifle and mitigate criticism and dissent.

The growing unemployment, soaring food prices, continuing farmers' suicides, malnutrition, lack of healthcare, etc are the real issues before the people, which the government has been  unable to solve (see my blogs 'Unemployment in India', ' Healthcare in India', 'Malnutrition in India ', etc on my blog justcekatju.blogspot.in).

'Make in India' has largely proved to be an illusion as no one, not even Indian businessmen are investing in India (a big American investor, Jim Rogers, who was earlier an ardent supporter of Modi, has exited from India, saying that one cannot invest on mere hope). The business atmosphere in India is gloomy, as many Indian businessmen have told me.

Coupled with these are the political problems the BJP has been facing — defeat after defeat, not only in elections to the legislative assemblies, e.g. Delhi and Bihar , but even in panchayat and municipal elections in many states. And to this is added the internal dissensions within the party, in which even the former avid supporters of the Prime Minister like Ram Jethmalani, Arun Shourie, Subramaniam Swamy, Kirti Azad, etc and the sidelined elders like Advani and Murli Manohar Joshi are raising their voices in opposition to the leadership. The DDCA scam had become a real headache.

And so it was an excellent idea to divert attention from all these.

The problem of the BJP is that it has only the upper caste Hindu votes. In states where it has a significant presence, like U.P. and Bihar, these (i.e. Brahmins, Rajupts, banias, bhumihars, etc ) these constitute altogether at most 16-18% of the total voters. But to win an election one has to get at least over 30% votes. so how does one get a section of OBC  and SC votes (Muslims will not vote for it as it is perceived as a Hindu communal party)? The only way for this is raising communal tensions.

Love jihad, ghar wapasi, beef politics, hate speeches etc have all been tried and failed. The recent attempt to resurrect the Ram Mandir issue, by bringing stones there has not generated any enthusiasm in the masses. The public has seen through all these ploys, and realised that food, jobs and healthcare are more important issues. So what is to be done?

Now all that is left are some gimmicks, like the one played out at Lahore. But, I submit, the current enthusiasm this has generated will not last long considering the harsh economic realities the people are facing.

Those who talk of improving relations between India and Pakistan are living in a fool's paradise. Pakistan was created by the Britishers on the basis of the bogus two nation theory so that Hindus and Muslims keep fighting each other.

This will ensure two things (1) India, of which Pakistan (and Bangladesh) is really a part, will not emerge as a modern industrial giant, like China, (for which it has all the potential, with its huge pool of engineers, technicians, scientists, etc and immense raw materals) and thus become a big rival to Western economies, and (2) sales by foreign arms manufacturers of billions of dollars of equipment to India will continue.

In my article 'The Truth about Pakistan' ( see online and on my blog ) I have said that the only solution to Indo-Pak problems, as well as the Kashmir issue, is reunification of India, Pakistan and Bangladesh under a strong, secular government which does not tolerate religious extremism of any kind, whether Hindu or Muslim, and sets about on the path of rapid industrialisation, which alone can solve our huge economic problems of poverty, unemployment, etc. That, no doubt, will take time, since those who divided us will not let us easily reunite, but it must be our goal.

What is Pakistan? It is Punjab, Sindh, Baluchistan and NWFP. These were all part of India since Mughal times.

When I meet Pakistanis I feel no different from them, we speak the same language (Hindustani), we look like each other, and share the same culture. We were befooled by the Britishers into thinking that we are enemies, but how much longer must we remain befooled? How much longer must blood flow in religious violence in Quetta , Karachi , Gujarat , Kashmir etc.?

Many people say that India was divided in 1947, much water has flown since then, and so reunification is a pipe dream.

My answer is : Germany was reunited after 45 years in 1990, Vietnam was reunited in 1975 after 30 years of being divided, and China still claims Taiwan as its province. When Mazzini spoke of Italian unification, many people said it was a pipe dream but that dream was realised under Cavour and Garibaldi.

Some people say that reunification is not possible because of religious fanaticism on both sides. I submit that this fanaticism is artificial. 99% of all people are good, because they want to live in peace and harmony.

So it is time now to wake up to realities, and spread the idea of reunification.