The Method Of Madness

On the surface, it is a familiar re-run of terror in Assam's killing fields. The week around Independence Day saw cold-blooded, massacres that killed 28 Hindi-speaking settlers. 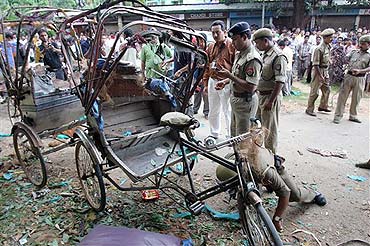 On the surface, it is a familiar re-run of terror in Assam’s killing fields. In four separate, cold-blooded, massacres spanning five days beginning August 8, 2007, Kalashnikov-wielding militants clad in jungle fatigues shot and killed 28 Hindi-speaking settlers — 25 from Bihar and three from Rajasthan — in the south-eastern hill district of Karbi Anglong. Rebels of the United Liberation Front of Asom (ULFA) have killed scores of Hindi-speaking settlers before, including 70 in a string of attacks in eastern Assam in January 2007. The latest round of carnage should not, consequently, have come as a surprise. More so, because Independence Day was round the corner and it has become a custom for the separatists in the Northeast, particularly in Assam, to step up violence during the run-up to important days in the Indian national calendar. On August 7, 2007, three civilians, including a local Congress leader, were killed in a bomb explosion right in front of the main Police Station in the district town of Jorhat, an important tea and cultural hub in eastern Assam, indicating that the ULFA had upped the ante well ahead of Independence Day.

The latest killings in Karbi Anglong district are, however, different because there appears to be some method in the madness. First, the murderous raids were carried out jointly by the ULFA and its tribal ally, the Karbi Longri North Cachar Hills Liberation Front (KLNLF), indicating that the ULFA was well-entrenched in the district, which gives access to Nagaland and the adjoining North Cachar Hills district in Assam. Secondly, highly placed security sources have confirmed to this writer that rebels of the rag-tag KLNLF have regularly been visiting Bihari settlers in remote locations in Karbi Anglong and collecting ‘tax’ at the rate of Rs 1,000 per household, besides taking away poultry and livestock from them. This constituted a kind of ‘protection money’ that the KLNLF was taking from these settlers. Why then did the KLNLF—which is a breakaway faction of the pro-talks United People’s Democratic Solidarity (UPDS) engaged in a peace dialogue with the government since 2002, seeking maximum autonomy for the Karbis—decide to train their guns on these poor sugarcane cultivators and petty traders?

L.R. Bishnoi, the Assam Police Deputy Inspector General in charge of the Range, offers an assessment: "The KLNLF has been active in the area, but now they have been convinced by the ULFA to terrorise and throw the settlers out from Karbi Anglong." If this is so, the ULFA-KLNLF combine is now engaging in nothing less than the ethnic cleansing of the Karbi Anglong district, which has a total population of 900,000, an estimated 80,000 of which comprises Bihari settlers. These Hindi-speakers are poor people, whose forebears, in some cases, settled in the area as long as 150 years ago. Most of them are sugarcane cultivators who take a bigha (0.33 acres) of land on lease from Karbi landowners in return for five canisters of molasses. Others earn their livelihood by selling vegetables or trading in groceries.

On first sight, the present flare-up appears to be the result of the ULFA prodding the KLNLF to oust the Biharis, but things may not be quite as simple as this, if available intelligence inputs are taken into account.

It is common knowledge that the ULFA’s so-called ‘709th battalion’ operates out of two major bases in Karbi Anglong, with the KLNLF providing it with logistic support in return for weapons and ammunition. This fact has been confirmed by none other than Assam Chief Minister Tarun Gogoi, who also heads the Unified Headquarters of the Army, Police and the Paramilitary Forces in the state. But, could it be that the crack hit-squads of the ULFA’s most potent ‘28th battalion’, which has its headquarters in Myanmar and is usually active in the eastern districts of Tinsukia and Dibrugarh, were actually involved in the latest killings in Karbi Anglong? Senior intelligence officials told this writer that rebels of the ULFA’s ‘28th battalion’ were directly involved in the latest string of massacres, assisted by their colleagues in the ‘709th battalion’ and the KLNLF. This exercise by the ULFA, they say, was aimed at easing the counter-insurgency pressure on them in their favoured playing fields in the eastern Tinsukia and Dibrugarh districts, and in adjoining Arunachal Pradesh. These are areas close to the headquarters of the ULFA’s ‘28th battalion’ in Myanmar, and the Army’s 2nd Mountain Division, based near Dibrugarh and responsible for the area, including Arunachal Pradesh (across Assam’s Tinsukia district), has been going all out against the ULFA and had killed or captured several militants over the past six months, forcing the rebels to adopt concrete measures to get the soldiers off their backs, at least for some time.

This appears plausible and, if claims by intelligence officials are to be believed, there have been ULFA radio intercepts to this effect in recent weeks. It is said that the ULFA’s Bangladesh-based bosses have been unhappy with the ‘709th battalion’ for their inability to strike and make a mark in the area.

This puts a question mark on the efficacy of the counter-insurgency strategy in Assam. On July 1, there had been a change in command in the Army’s field operations in Karbi Anglong district. Until then, the 2nd Mountain Division, the bete noire of the ULFA’s ‘28th battalion’, was in charge of Army operations in the district. That charge was handed over to the 21st Mountain Division based in the central Kamrup district. This change, of course, did not affect troop deployment on the ground in Karbi Anglong and, when the killings shook the state last fortnight, there were four columns of the 5 Bihar Regiment in the area, comprising roughly about 400 soldiers. The only change was that a different set of commanders at various levels had taken charge of the troops. Besides the Army, moreover, there were more than 10 paramilitary companies deployed in the Karbi Anglong.

With the Police not really trained to tackle insurgency, a great deal of responsibility for success in counter-insurgency operations is pinned on the Army and the Paramilitary Forces. But, with Army and paramilitary contingents shuffled and shifted from place to place at regular intervals, it is not surprising that the militants continue to have that vital edge of a thorough knowledge of their area of operation. For instance, in the current round of violence, the Security Forces could manage to target the rampaging rebels only on August 13, 2007, a full five days after the killings began. That was when a Police patrol came face-to-face with a six-member KLNLF group near the town of Barpathar, resulting in a shootout in which two of the militants were killed. The rest fled.

If counter-insurgency strategies need to be revised and fine-tuned constantly in keeping with the change in tactics by the militants, the government’s response mechanism, too, needs to be revamped and institutionalized. It took the state authorities four days to actually set up some camps and evacuate Hindi-speaking people located in remote and vulnerable locations to safety. This process could have been set in motion on August 8 itself, when eight people were massacred in village Aampahar. Secondly, signals coming out of the government or those heading the counter-insurgency operations are extremely vital. In early August, a section of the media in Assam reported that Chief Minister Gogoi, who heads the Unified Headquarters, had virtually expressed helplessness in dealing with the Army. "The Army often oversteps its limits, has its own rules for operations and does not take policemen along during operations, which we always insist on," the Chief Minister was quoted by the media as telling a delegation protesting alleged excesses by the soldiers. What is necessary in Assam is a synergy among the various components of the security establishment with a coordinated rather than a competitive command. What is puzzling, in the final analysis, is the inability of the security apparatus to neutralize a band of 200 KLNLF armed cadres (according to intelligence estimates) who are on a killing spree in one single district, and an estimated 100 ULFA hit men. The moment the jigsaw fits in place, the battle could well be won in the Karbi Hills.

'If It Were China, They Would Have Settled It With One Bullet In His Head'