The Man Who Is Not

'I am not Tamil, I am not a Eelamite nor a Lankan, I am not Hindu, not Christian, I can't be French, I am not gay, not straight.' 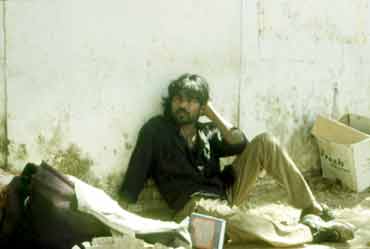 Our era is the age of the refugee, the displaced person, the exile.

When Jakappu Antony Thasan landed in Chennai on January 1 to begin his annual pilgrimage to Tamil Nadu, his travel document (not ‘passport’) said he could visit any part of the world but not Sri Lanka. Also, he had to report back to the French authorities within 30 days. Needless to say, he always had to carry the 'travel document' on his person: "Once I land in Chennai the Q-branch of the Tamil Nadu police begins tracking me, thinking I could be an LTTE supporter."

Antony, known in Tamil literary and political circles by his pseudonym Shobasakthi, does not belong anywhere. He is unwelcome in Sri Lanka both by the LTTE and the Sinhala establishment. In Tamil Nadu he has to watch his step. And as someone who has studied only up to Class X, he does not have the luxury of Professor Edward Said who says, "the intellectual-as-exile tends to be happy with the idea of unhappiness".

Shobasakthi lives in Paris and washes dishes in restaurants. "I would have worked in a hundred restaurants, but I stick to one job for three months before making a trip to India since that’s necessary to get a travel document." He, like one lakh Tamils from the Eelam, is a political refugee in France. But he is certainly not one among them.

In a world where, according to the United Nations, one-third of humanity does not live in the place of its birth, Shobasakthi is a refugee among refugees. He is part of a much-harassed fringe that is vocal in its criticism of the "fascist, casteist and Hindutva tendencies of the LTTE" and its "dictatorial leader" Velupillai Pirabakaran.

Shobasakthi should know, because, as he says: "In 1983, when I was 15, I picked up the gun, inspired by the LTTE’s struggle for Eelam. But within a few years I came to be terribly disappointed." LTTE's massacre of Muslims, recourse to opportunistic talks (at Thimpu, 1985), and liquidating of other democratic Tamil outfits in the Eelam made those like Shobasakthi lose faith in the organisation.

Antony was born in a little island 3 km from Jaffna, joined the LTTE, and after quitting the outfit landed in a Colombo prison, from where he escaped by bribing Sinhala officials, moved to Thailand where he stayed as an illegal immigrant for three years, and one day, nine years ago, escaped to France where he is honoured as a political refugee. In France he wrote his first novel, Gorilla, which exposes the fascist face of the LTTE, not that it spares the Indian and Sinhala governments.

The cash-rich pro-LTTE Eelam lobby entrenched in Europe is powerful and ruthless. It brooks no criticism. Few can afford to dissent against itand breathe easy. "We are just a handful in Paris and other parts of Europe. But we have now created a space for ourselves and are being heard," says Shobasakthi.

The creation of this space for resistance has been possible for Antony and his Europe-based friends by forging a common cause with those in Tamil Nadu who are critical of Hindutva, casteism, and Tamil nationalism. "When the LTTE officially builds Manikkavinayagar (Ganesha) temple in Paris and performs Sanskrit archanas there, we see Tamil nationalism becoming Hindu nationalism. The LTTE embodies all the fascistic tendencies that Hindutva in India does. There are 150 temples in Jaffna and entry for dalits is denied,"  he says.

And it is to explore the common ground from which such forces could be resisted that he and his friends have been making annual trips to Tamil Nadu.

For the last five years, every January, coinciding with the Chennai book-fair, Shobasakthi and his partner Sugan bring out a literary souvenir. In 1999 it was Irul Veli (A Hidden Space) a Dalit-Feminist collection, in 2001 it was Sanadharmabodhini (A Manifesto for People’s Justice), and this year it was Karuppu (Black) which features "counter-narratives", where the introduction talks of "the need to turn everything upside down".

The book belittles all talk of "our culture, our language, our nation" that is LTTE staple. Such political criticism is laced with sarcasm. Shobasakthi and Sugan tell us in their introduction: "Ka. Vasudevan, a France-based pro-LTTE literary figure, posed a question in an opinion poll run by his website, ‘Should we polish [sic] Hinduism or let it disintegrate?’ In response, we ran an opinion poll, ‘Should Vasudevan be beaten with a broom or with a shoe?’. Most respondents agreed upon the need to thrash Vasudevan, with a shoe or broom was immaterial."

Shobasakthi is a man divided many times over. Multiple non-selves coexist in him. "I am not Tamil, I am not a Eelamite nor a Lankan, I am not Hindu, not Christian, I can’t be French, I am not gay, not straight." Shobasakthi is, simply, not. In his not-being and not-belonging, he belongs.