The Link To Nowhere

In the middle of celebrations over the 5.6 kilometre new stretch of concrete road, over the sea linking Bandra and Worli, it is hard to sound rational, let alone sceptical. But it is difficult to miss some obvious questions... 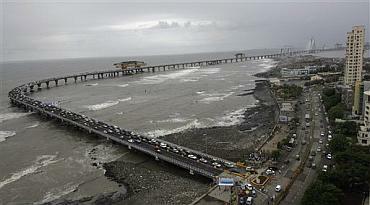 This is a rare moment of communal celebration in Mumbai. After 10 long and will-it-won’t-it-happen years, the city finally got itself the 5.6 kilometre new stretch of concrete road, over the sea linking Bandra and Worli. In the first 24 hours after it was inaugurated on the evening of June 30th, a whopping one lakh cars had streamed on the sea-link, in typical bumper-to-bumper traffic for the better part of the day. Nothing new for Mumbai, only no one expected it on the sea-link that was supposed to clear the Bandra-Worli distance in seven minutes.

Seven minutes or 40 that it took on Tuesday morning peak hour traffic, it’s hard not to feel the exhilaration of gliding over the sea, virtually speaking, as the car hugs the concrete and the steel frame passes by. "This is it, madam, this is it," shouted an excited middle-aged man in his SUV, "No one in the world should call us names now, we have it all." Mumbai smugness? Perhaps. Shanghai, the city that Mumbai Makeover is modelled upon, got two new sea bridges six times as long as Mumbai’s sea-link, in about half the time. On Day One, all is forgiven, even the chaos and confusion amongst traffic cops who allowed a U-turn at Worli when they were not supposed to, causing a domino-effect on the traffic headed south.

Looking across from the Mahim Causeway, bathed in special illumination the earlier night, hours after politicians had done their politicking over the sea-link, it shone in full glory, girders and beams and all. It was a photographer’s delight. This was Mumbai’s newest, swankiest, state-of-the-art, first-in-the-country landmark. The Gen Next believes the sea-link should be the visual representation of the city from here on. It is a welcome new symbol, one that the Twitter generation quickly downloaded as their screensaver and wallpaper.

This is the challenger. The Gateway of India is ancient; it was, after all, meant to welcome a colonial ruler. The Marine Drive, lovingly and somewhat exaggeratedly called the Queen’s Necklace, is as old, built on the coastline to house the wealthy and famous in the Art Deco structures in the 20th century. The only other visual for Mumbai has been the Dharavi slum, hardly one that would make a Mumbaikar proud. The sea-link is, in a sense, the fitting symbol of the new emerging India.

In the middle of such celebration, it is hard to sound rational, let alone sceptical. But take away the first thrill of gliding over water, as it were, and it is difficult to miss the obvious questions. Here are some, in no particular order.

The engineering marvel, as TV news channels kept reminding us by the minute, cost a whopping Rs 1634 crore, up about a thousand odd crore from the original cost estimate in 1999. It is, without doubt, the most expensive half-piece of a project that will essentially benefit less than 10 per cent of Mumbai’s commuter population. The wonderful sea-link will not permit two-wheeler and three-wheeler traffic, while the city’s most dependable road transport system -- the BEST buses -- are yet to get the nod to use it. Private vehicles such as cars and SUVs, and semi-private ones such as taxis or hired cars, form barely 10 per cent of the city’s traffic as a host of studies have repeatedly pointed out. The sea-link is of immense benefit to car and cab users, but they are a small minority -- highly visible and vocal, but small -- in a city of 10 million commuters. How exactly does it benefit the city?

The sea-link, as it stands, is part of a larger plan that will either extend the link all the way to Nariman Point, the central business district in south Mumbai, or be connected to a proposed 4.7 kilometre flyover from Haji Ali to Chowpatty going across the tony Pedder Road. This is the flyover that Lata Mangeshkar did not want streaming across her Pedder Road apartment balcony, and was shelved after her objections six years ago. The Worli-Nariman Point sea-link is still on the drawing board, given its huge cost and endless environmental issues. Till either carriageway takes shape, cars that drive down the sea-link to Worli will have to contend with delays, clogging, and bottle-necks at either end of the sea-link as well as for the rest of the ride. Traffic movement, traffic discharge at key junctions, integrating a new link into existing carriageways should ideally form part of comprehensive transport planning. How did planners envision that the sea-link would help discharge the north-south traffic in the existing network?

A related and equally significant question is about transport planning itself. It’s no longer a secret that the Brihanmumbai Municipal Corporation (BMC) has not had a fully functioning planning department for the city for the last ten years. The Maharashtra State Road Transport Corporation (MSRDC) and the Mumbai Metropolitan Region Development Authority (MMRDA) are in charge of transforming the city into the international centre that is envisioned. Ask either agency head, where and how the sea-link fits into the larger transport plan for the city; all you get is a shoulder shrug. You would imagine that for a city like Mumbai, every transport initiative is part of a larger comprehensive jigsaw whose design is to ease commuting for the maximum number of Mumbaikars. This, after all, is a commuter city. In the midst of under-implementation metro, proposed monorail, under-consideration Bus Rapid Transit System, under-construction skywalks, where exactly does the sea-link fit? Or is it an ad-hoc approach to transport issues -- arising from the oft-repeated need to make use of the sea, driven by a need expressed by the most visible and vocal section of the city?

The line that hard-sold the sea-link to Mumbaikars was that they could traverse the Bandra-Worli distance in seven minutes flat. On the Mahim Causeway route, it presently takes anywhere between 15 to 45 minutes, depending on the day of the week, time of the day and other variables. But if you journeyed the sea-link in seven minutes, you would still have to contend with bottle-necks and traffic jams for the rest of the ride to the business district; that’s approximately another 12-15 kilometres down south. It’s a bit like zooming for seven minutes in the middle of an hour or 90-minute ride. Now, car owners are asking if the Rs 50 toll one way is worth the time saved. At Rs 2,500 for a one-month pass, isn’t the sea-link possibly the most expensive piece of concrete to ride on, and would it be worth the time saved if say two-three cars of a family use it everyday?

The MSRDC claimed, all through the construction by Ajit Gulabchand’s Hindustan Construction Company, that the sea-link would carry no less than 4,400 cars an hour in peak hours. If yours is one amongst them, you would be cruising at just about 9.6 kilometres an hour. Experts are now casting apprehensions over a reduced claim of 3,000 cars per hour in peak hours. To achieve this, cars would be clocking no more than 23 kilometres an hour, half of the 50 kilometre per hour limit set for the sea-link. Assuming that the one lakh cars in 24 hours was an emotional out-pouring that will taper off once the toll is charged from July 5, will the sea-link be able to carry the 60,000 projected vehicles a day, with the promised seven-minute journey from end to end?

Given the current pre-occupation with security systems in Mumbai, and union home minister P Chidambaram’s statement that the next terror attack could come from the sea, the security of the sea-link cannot be overlooked. One incident should suffice to show just how little thought has been given to this aspect. A part of the security cover for VVIPs including Sonia Gandhi at the inauguration ceremony on June 30th included a patrol boat in the sea, around the sea-link. A good patrol boat could not be found with the Mumbai Police. A fishing trawler was hired from a private agency. It carried four policemen and five sailors, and the standard security kit including life-jackets and weapons. They could not return ashore after bandobast ended at 8pm, thanks to the rough sea. In the early hours of July 1 when they started heading back, fishing nets entangled with the propeller of the engine, and stalled the trawler. Coast Guard was requisitioned; CG helicopters did sorties throwing down a ladder to the trawler. Relieved policemen climbed up and were flown to safety. The chopper then returned for the sailors. The length of the sea-link falls under the jurisdiction of five police stations; none knows what to do to ensure its security. What is the security cover for the sea-link, what is the emergency protocol, who stands as the first line of defence?

The fishermen around Mahim, whose catch has been severely affected during construction last few years, believe they -- Koli community -- has once again sacrificed for the larger good of the city, and got nothing in return. Hardly anyone has given them a thought. And, almost no one except the environmentalists has spared a thought for the mangroves that drift into Mahim Causeway, that function as the natural drainage of the city. What’s a mangrove or two in front of a sparkling new sea-link?

Then, of course, are the little bits of politicking that threaten to out-do other more significant aspects. Sharad Pawar, in a smart swift move, suggested at the inauguration that the sea-link be named after the lat Rajiv Gandhi who, he said, was not only a visionary and model for young Indians but was also a "bhoomiputra" (son of the soil) by virtue of being born in Mumbai. The Congress, and Sonia Gandhi, were pleased and endorsed the suggestion. The Shiv Sena took offence because when the foundation stone was laid in 1999, the sea-link was to be name after Vinayak Damodar Savarkar. The party agitation threatens to turn ugly. Its partner BJP has warned of taking the "name issue" to the Bombay High Court soon. Not to be left behind, Raj Thackeray has demanded that the sea-link should ideally carry the name of a martyr of the Samyukta Maharashtra Movement that allowed the state to get its identity. And, in the middle of it all, corporators of the BMC have demanded free travel across the sea-link as they "work for the citizens and should not be made to pay toll".

Whose sea-link is it, after all?

The Court Battle: A Chronology