The match was as good as over with India cruising at 235-5, but the Lankans came back hard to eke out a narrow five-run verdict. 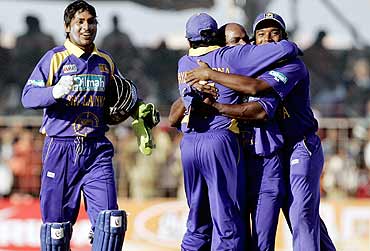 In a dramatic turn of fortunes in the dying stages, India suffered an inexplicable lower order batting collapse which allowed Sri Lanka to escape to a nail-biting five-run victory in the second one-dayer today.

Chasing Sri Lanka's 257-8 built around Kumar Sangakkara's brilliant 110, the Indians were cruising along comfortably at 235-5 at one stage before losing the plot completely to give the visitors a 1-0 lead in the four-match series.

The capacity crowd at the Madhavrao Scindia stadium were left shell shocked as the hosts made a hash of their chase, losing their last five wickets for just 17 runs from 27 balls.

It was a disappointing end for the Indians who had the game under control till the 45th over with Sourav Ganguly (62) and Sachin Tendulkar (54) putting them on track with a 100-run third-wicket partnership.

The hosts needed 11 runs from Sanath Jayasuriya's last over but the dismissal of the hard-hitting Mahendra Singh Dhoni (48) off the penultimate ball made the task even more difficult.

Last man Sreesanth had to hit a six off the last ball to fetch an improbable win but he failed to even connect the ball, much to the delight of the Sri Lankans.

The two teams will now travel to Goa for the third match of the series to be held on Wednesday.

Opener Uthappa (7) guided Farvez Maharoof to the slip cordon in the second over and then Dravid (5) dragged a ball from the pace bowler on to his stumps to leave the hosts in some difficulty.

Tendulkar mauled sling-arm action bowler Lasith Malinga by hitting him for fours off successive balls on three occasions while Ganguly was a good foil at the other end as the Indian hundred came up in the 21st over and after the first twenty overs the hosts were well ahead of the asking rate with 114 on board.

Lanka introduced leg spinner Malinga Bandara to check the run-flow and the bowler not only applied the skids on the run-rate but also managed to lure Tendulkar out with a teasing leg break and got him stumped by Sangakkara.

Ganguly left 25 runs later at 154 by edging Malinga, brought back in to the attack after Tendulkar's fall. Ganguly hit six fours and a six.

When the out-of-form Virender Sehwag fell to an injudicious off glide, things looked a bit wobbly for India.

Sehwag looked a bit rusty in his first innings after returning from the South Africa tour and fell by playing an indiscreet off glide off Bandara which he managed to only nick to the 'keeper.

But Dhoni, who was bowled off a no-ball by Bandara off the first ball he faced, and the doughty Dinesh Kaarthick got together and piloted India out of troubled waters but the latter fell in trying to force the pace in the 46th over and at his dismissal the hosts needed 23 off 26 balls.

Dhoni tried his level best thereafter but could not succeed in guiding India home.

The catch that sent him back with Maharoof running back ten yards and catching the ball spiraling down ended the hosts' victory hopes.

Earlier, the in-form Sangakkara scored a masterly 110 to help Sri Lanka recover from a top order collapse and post a competitive total.

Sangakkara revived Sri Lanka with a century partnership with Tillekaratne Dilshan after the visitors slumped to 58 for four after being put in to bat.

Vice-captain Sangakkara played superbly against both pace and spin on a wicket that afforded seam movement with a bit of grass cover on it while stroking his way to a classy sixth one-day hundred in his 187th tie in 125 balls. 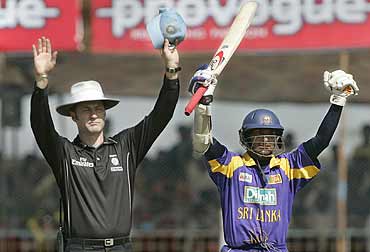 After surviving a hard return catch when on 91, Sangakkara surged to his well-merited ton with a pulled six off Anil Kumble in the 48th over.

His fabulous knock was embellished with 11 fours and four leg-side sixes - three off pull shots and the other off an on-drive - before he was caught in the deep in the 49th over.

Dilshan gave the Lanka stumper good support with calm assurance after the Indian new ball bowlers Munaf Patel and Sreesanth had made deep inroads by capturing two wickets each.

The 30-year-old Dilshan scored 56 in quick time, with 7 fours in his 65-ball innings before he was deceived by off spinner Harbhajan Singh's 'doosra' and bowled off stump in the 36th over. It was his 8th fifty in his 107th tie.

The fifth wicket duo's partnership steadied the Lankan ship after Patel and Sreesanth had bowled incisive opening spells, the latter even bowling his ten overs on the trot for figures of 2 for 39, including the wickets of opener Upul Tharanga and Lanka skipper Mahela Jayawardene.

Patel ensnared the dangerous Sanath Jayasuriya, a ball after he had been slashed over point for a six, and former skipper Marvan Atapattu to put the brakes on the Lankan run-rate.

Later he came back for his second spell to add the wickets of Sangakkara and Maharoof and ended up with an impressive 4 for 49.