Call it a constitutional quirk or going by the word of law, but the killer heir-apparent is anointed the de jure king 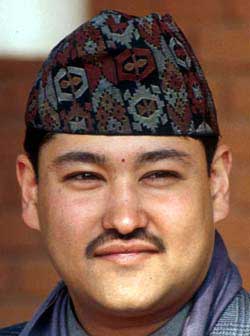 outlookindia.com
-0001-11-30T00:00:00+0553
Though Kathmandu was rife with rumours since Friday night, no announcement was made on radio and television till 1315 on Saturday about the killings. The delay was reportedly because the Raj Parishad meeting had been unable to decide on the king's successor.

The Raj Parishad, which acts as the royal advisory body, comprising of the prime minister, chief justice and the commander-in-chief of the armed forces among others, convened an emergency session on Saturday morning to assess the situation. It is empowered to decide 'whether His Majesty is mentally or physically incapacitated,' pass 'a resolution confirming such incapacity by a majority of two-thirds of its total membership,' and 'proclaim the crown prince to be the regent if he has attained the age of eighteen years,' and 'in other circumstances, it shall, subject to rules made by His Majesty, proclaim a Regent or Council of Regency.'

The chairman of Nepal's Raj Parishad, Keshar Jung Rayamajhi, finally announced the deaths and the succession to the country on television and radio 17 hours after the massacre at the royal palace, after after its follow-up meeting on Saturday, at 1315:

"According to the 2046 (1990) Constitution of Nepal and the laws of succession and according to the grand traditions we declare that his majesty's eldest son, Crown Prince Dipendra Bir Bikram Shah Dev, will be the king of Nepal as of the evening of 19 Jestha 2058."

No details of the killings were however provided.

According to some reports, astrologers had advised the royal family that Dipendra, who had been educated at Eton, should not be allowed to marry or have children until 35. The seers had apparently warned that if the directive was not followed, the king would die. Dipendra would have turned 30 on June 27.

There had been hushed whispered rumours that the prince wanted to marry Devyani Rana, daughter of former minister Pashupati Sumsher J B Rana, and the niece of Congress general secretary Madhavrao Scindia. The palace grapevine had it that his mother wanted the prince to marry a girl from the imperial Shah clan.

But it was seen as a minor family tiff with no outward signs of internal divisions in the royal family, and no suggestion that there was any kind of a rift between King Birendra and his son, Crown Prince Dipendra, before the palace massacre on Friday. Nobody in their wildest imagination thought of such an end to a domestic dispute.

Born in 1971, Dipendra was educated in Nepal (a first class BA degree and an MA in geography) and later at Eton, the top private school in the UK - where he said he imbibed the values of "fair play and discipline". BBC quoted the Provost of Eton, Eric Anderson, as saying that Dipendra was remembered as a "great student. Those who knew him at the college are deeply shocked by what has happened."

The prince with an interest in guns and hunting, and a karate black belt to boot, was seen as a gentle and amiable and man who had apparently changed his lifestyle in recent years, for the better in recent years. Negative reports about his youth - allegations that he drank heavily while at Eton - had created some image problems for him but he had since taken keen interest in improving Nepal's performance in sport and other fields. Recently, he had even attended the Nepali parliament in an effort to familiarise himself with the workings of the Nepalese constitution.

He was declared heir-apparent in 1972 and in 1990 made colonel-in-chief of the Royal Nepal Army and like any member of the royalty, largely restricted to performing ceremonial roles - meeting foreign dignitaries and inaugurating conferences.He was appointed chairman of the Council of Royal Representatives, two years later, and was responsible for looking after affairs of state during the King's absence. He was the one who greeted Princess Diana on March 2, 1993, when she arrived in Kathmandu on a visit and also hosted the dinner for the princess, instead of his parents.

His hobbies are reported to include flying helicopters, swimming, squash, listening to Nepali folk songs and modern and classical western music and reading poetry.

While it had been earlier believed that the new King had succumbed to his injuries, he is said to be in a coma and on life-support systems in the military hospital.

Nepal: A Country In Crisis