'The Idea Is To Just Enjoy The Game'

It doesn't really matter if it's Australia or India that they play. They both look equally tough, says the Kenyan captain. 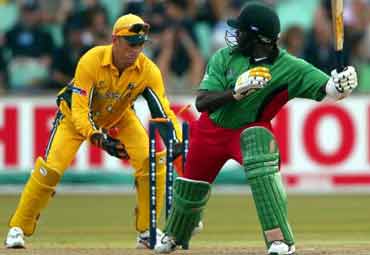 Kenya’s captain, Steve Tikolo, is getting used to questions, to facing television cameras and speaking carefully. He is a serious looking man who looks as though he was born with some wound that will never heal. He is taking a walk with Outlook on Durban’s Kingsmead.  "Let me look at the wicket," he says. It’s rock hard. It was on this belter that Kenya lost to the Australians in their last Super Six game that had no consequence in all matters excluding pride. Excerpts from an interview

Since you played against the two teams within a space of a few days, what in your opinion is the difference between Australia and India?

I would rather let the Australians and the Indians sort that out themselves. All I can say is that if you go by their record the Australians are obviously the best side in the world. But if you ask me if I am glad I am playing India in the semi final and not Australia I would say that is not true. To me it doesn’t really matter if it’s Australia or India that we are going to play. They look equally tough to us. The idea is to just enjoy the game.

Some of your players were injured in the match against Australia. Are they all fit for the game against India?

Yes they are fine.

What do you think of this pitch? How will it behave?

I think it’s going to help the batsmen in the beginning but later on assist the spinners.

Sandeep Patil will be leaving you after the World Cup. You will obviously miss him.

Yes. It’s very sad he will be leaving us. What he has done with the boys is amazing. I wish he could stay but I suppose he has his reasons not to extend his contract.

What does this team’s success so far in the tournament mean to Kenyan cricket?

There is a lot of excitement back home. The ICC is impressed with us.  I just hope we get to play more cricket at the highest level.

Have any of your players got any offers from the English counties?

None so far. No body has any offer. Not from the counties. Not from any foreign clubs.

Do you think this World Cup will change anything?

I hope it does. I hope there is more interest in the game and more money comes in.

A Mismatch Of Gigantic Proportions