The Healing Powers Of Sports

On July 11, even Catalonian cities and towns celebrated Spain’s World Cup win. Imagine a scenario where a Naga or Meitei or Kashmiri youth represents India in cricket-- or football... 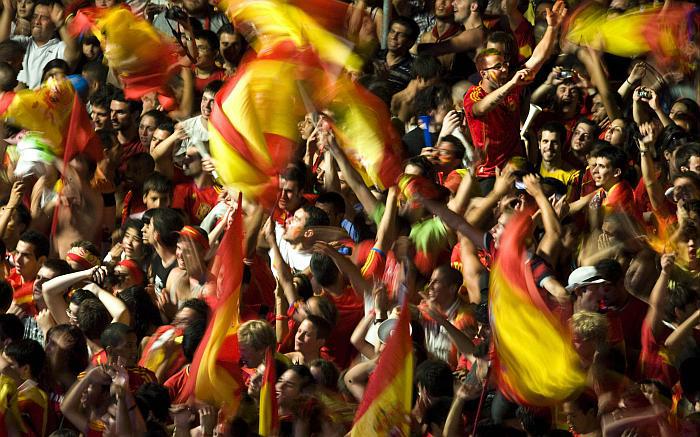 Countries suffering from separatist sentiments in a section of their populace can learn a lesson or two from the composition of the Spanish football team that lifted the World Cup 2010 on Sunday. The team was dominated by eight players from FC Barcelona football club, situated in Catalonia, a region that demands greater autonomy and exclusion from the “idea of Spain” as a unified nation.

Public opinion in Catalonia in general and Barcelona in particular, was none too pleased with the inclusion of FC Barcelona players in the Spanish national team. Catalans and Basques aspire for separate Catalan and Basque sports teams to compete in international events like the World Cup football. All four candidates participating in FC Barcelona’s Presidential elections on June 13, 2010 publicly voiced their support for a separate Catalan football team to enter the qualifying stages of the 2014 World Cup.

Significantly, in the aftermath of Spain’s World Cup victory, Barcelona and the Basque city of Bilbao witnessed rare sights of Spanish flags flying side by side with Catalonia’s own red and yellow flag. Earlier, people wearing the Spanish football team’s jersey or flying the Spanish flag in this region would have provoked assault and ridicule; not any more. On July 11, people thronged the streets of Catalonian cities and towns wearing Spanish jerseys to celebrate Spain’s World Cup win. Yet, that did not provoke feelings of animosity; only a sense of euphoria. While sceptics such as Paul Preston, a Spain expert and history professor at the London School of Economics argues that this feeling of unification over football will not last long, it is worth noting that at least in the short run, football has succeeded in achieving something significant enough to quell separatist sentiments: common feelings of happiness and excitement across Spain.

What lessons can we draw from this event to handle our own separatist movements especially in Northeast India -- or even Jammu & Kashmir?

Separatist violence is endemic to the Northeast since India achieved independence. Naga inhabited areas have witnessed separatist violence since 1956, resorted to at present by armed groups like the National Socialist Council of Nagalim led by Isak Chisi Swu and Thuingaleng Muivah--NSCN (IM) and the National Socialist Council of Nagaland—S.S. Khaplang—NSCN (K). Manipur has also been disturbed by armed separatist violence with the formation of the United National Liberation Front (UNLF) on November 24, 1964. The Revolutionary People’s Front (RPF) and its armed wing, the People’s Liberation Army (PLA) have also been engaged in a separatist struggle in Manipur since 1976. Most feared, however, is the Kanglei Yawol Kanna Lup (KYKL). Another group, the Peoples’ Revolutionary Party of Kangleipak (PREPAK) was established in the 1970s with the objective of fighting for Manipur’s independence from India. Neighbouring Assam, the most dominant state in the Northeast in terms of demography and resources, has also been plagued by separatist violence since 1979 with the formation of the United Liberation Front of Asom (ULFA). The hill districts of Assam, North Cachar Hills and Karbi Anglong, also witnessed the rise of armed groups in the 1990s like the Dima Halam Daogah (DHD) and the United Peoples’ Democratic Solidarity (UPDS).

Likewise, the recent troubles in J&K tell their own story of the contentious history since independence. While India has been able to manage the violence for the last 60 years or so, no concrete resolution appears in sight to negate feelings of alienation, marginalization, and address the reasons behind people’s support for separatism in these areas. The Indian security forces’ strong presence in these areas gives local people a feeling of being constantly under vigilance. The ‘idea of India’ in these far flung areas appear to be of a democracy, not based on pluralist living, but dominated by the bureaucracy and the security forces, The situation also seems bleak with the culture of “bandhs” crippling normal life almost every other day.

If one looked hard and long enough though, there is light at the end of the tunnel. The greatest asset possessed by these areas is their youthful population. By 2020, the age group of 20-30 will dominate the population ratio in the Northeast. And most of the youth there excel in sports whenever given an opportunity. The film Chak De India had a strong impact on the Northeast due to the visual representation of two players from the region in the film’s fictitious hockey team.

While Northeast youths have started representing India in sports like boxing and weightlifting, the need of the hour is their participation in popular national sports like Cricket and Football. Clearly, the idea would not be to pick up players for national teams on any quota or reservation system but to encourage talent. Often, the lack of suitable players is cited as a reason. This could well be true. But surely talent can be nurtured? One of the biggest reasons for unrest in any area is always identified as the restlessness of the youth. Nurturing talent and offering them hope of being able to earn a name for themselves on a large platform could actually help assuage their real or perceived feelings of discrimination. In the long run, this could even contribute in resolving some of the the larger structural conditions of conflict and alienation.

There is need to nurture talent in a focused and systematic manner. The tragedy also stems from the fact that young talented sportsperson in these areas have scarce infrastructure in their own native states to hone their sporting skills, which proves in the long run to have a negative impact for the health of sports in India. We need to be more committed to nurturing talent from all the states based on a long term perspective, especially from those states that suffer from separatist narratives.

Can we imagine a scenario where a Naga or Meitei or Kashmiri youth represents India in cricket-- or football? The kind of impact that will have in quelling separatist sentiments will be enormous. We are told that Brazil picks up talent on the streets and then systematically nurtures it. We could do the same. Imagine a team where there is abundance of football talent carefully nurtured. Spain has shown the way by picking a majority of its talented players from a region with separatist tendencies and the results are for all of us to see. India needs to focus special attention on sporting talent from peripheral regions harbouring separatist sentiments and by extension build a solid foundation for meaningful national integration.

Sport, as our own cricket nationalism informs us, is a great unifier. Let’s utilize its power judiciously.

Dr. Namrata Goswami is an Associate Fellow at the Institute for Defence Studies and Analyses, New Delhi. The views expressed here are her own.