Introducing a new column by one who insists on calling himself the Headless Chicken as he claims the nomenclature is suffused with symbolism that is subject to, well, subjective interpretation. 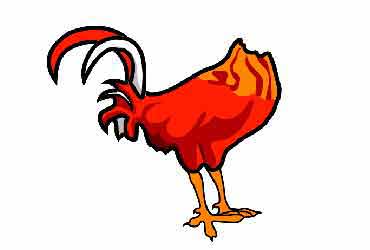 Do you care who or what is this Headless Chicken, one who seems to have access to a keyboard, to top it?

The headless chicken paused to, as it is said euphemistically, answer the nature's call, took a piss at the top of the world where the GT Road begins and that's where he met a brother. This is where it leaked out into, while they were chatting, circumcised and uncircumcised.

Here is something from memory of past experiences. I hope you'll enjoy reading it.

Journal Entry: 1
Torkham to Wagah
Scenes in the buses on GT Road

Torkham is the westernmost point of GT Road in Pakistan. From here GT Road passes through Pakistan in ESE direction until it reaches Wagah – the border post between the two Punjabs.

At Torkham, most of the passengers are bearded men with Pathan turbans; wearing white, light blue or black shalwar kameez as depicted in old Shashi Kapoor movies . The music played in the buses is familiar -- Pushto lyrics to old Indian movie song tunes. Only a few men smoke, but Naswar rules here that requires little more spitting than paan chewing but unlike the paan spits, their spots are washable.

Buses stop at the nearest settlement at prayer times, providing men the option to pray or have another dose of Naswar or sip a cup of local style tea called kahwa. A small number of women start appearing in the buses at Jamrud, some 20 miles from Torkham. They are mostly shuttlecock burqa-clad, and sit quietly in the women section, without looking around, like dummies.

From Peshawar onward, the number of beards and turbans as well as the shuttlecock burqas starts declining, their place being taken by clean-shaven men and white chadar-clad women. The tea at the stopovers is served with milk and more smoking men make their appearance replacing the exiting naswar-chewing men.  As for what passes for music, this is the time when Ata Ullah Khan Isakhelvi begins to get played..

Once the buses pass Attock Bridge on Indus River, the influence of nearby Akora Khatack declines and a thin line of hair above forehead becomes visible among chadar-clad women. The turbans, beards, most of naswar-chewing men and shuttlecock burqa clad women disappear, giving way to mustachioed men in shalwar kameez and some black UP style burqas as well as dopatta-clad women.

Now, women actually start looking out the windows and are heard talking to each other. This is the Pothowar region and  roasted Moongphali territory. Men and women in the buses can be seen eating peanuts off improvised containers made from old newspapers; men smoke cigarettes as a break from all that peanut-eating  The peanut shells and cigarette butts are casually thrown on the bus floor and stick under the shoes, the Naswar spits acting as the glue that binds, the way cultures of the region are glued together.

This is still Ata Ullah Khan territory in music with buses playing, "Kameez tehNdi kaalii, sohne phullaaN waalii" incessantly until everybody has memorised all the verses.

From Rawalpindi to Jhelum, the Moongphali reigns supreme, interspersed with some bored smoking, but it's time for turbans of a yet another kind to start making an appearance. The women chadars are no longer only white; and proof of  hair on their heads is now visible. Some be-haya women could be actually seen with short hair and dopatta only around the neck or shoulder. They talk and gawk outside the buses, just like the men. Men with their arms around other men also disappear.

After crossing Jhelum River, heading towards Gujarat, dhotis and kurta-clad men make their appearance. The beards are at an all-time low, but Punjabi turbans are on the rise. Moongphalis have given way to seasonal fruits. The amalgamation of Scythian cultures is no longer observed under the feet or on the bus floors because fruit skins and seeds are thrown out the windows instead of creating great Scythian brotherhood on the bus floors.

The cigarette smoking continues but cigarettes are no longer held between the tips of two front fingers; they are held in between the bottom two and inhaled from top of the fist. It is no longer immoral and unethical for women to turn their head and look back at fruit-eating and/or smoking men. The music is folk as well as movie songs from Punjabi and Indian Hindi movies. Nusrat Fateh Ali Khan is more often heard than anybody else.

From Gujranwala onward to Lahore, fruit-eating declines, giving way to processed food like pakoras, roasted lentils and stuff made from gram flour with spicy chutnis in contrived pouches of old newspapers. The GT Road now passes mostly urban and industrial estates. The number of dhotis and turbans decline, giving way to shalwar kameez and pants and shirts.

Many men with hanging big bellies are now seen in the buses, who mysteriously manage to slump off to sleep as soon as they hit their seats and start snoring almost instantaneously. Women are seen in more colorful shalwar kameez and dopattas, often wearing sunglasses even on overcast days. They talk loud and endlessly drowning the noise of bus engines. The trip from Lahore to Wagah is short and a few dhotis and the turbans reappear.

On entering the Indian Punjab, the scene changes abruptly. The numbers of smokers dwindle to insignificance, colorful turbans and beards are dominant again, with basanti colours decorating the buses. The women love to call themselves jattis and beat all standing records of talking and making what can only be called noises with repeated use of "tut paiNey" as taqiya-kalaam. Gurdass Mann and Hans Raj Hans songs dominate. I wonder if buses stopover for Bhangra and Giddha the way they stopover for prayers in Pathan territories.

No wonder where you travel on GT Road, every damn person claims to be of unadulterated Scythian blood or of Arabian heritage. Nobody claims to be of native, Aryan or Hun origin till somewhere in the Indian Punjab when sari-clad Aryans with visible navels and sometimes some cleavage make an appearance. The polymerised amalgamation of Scythian and Arab cultures is occasionally scrapped off from the floor of the buses by natives, shudras turned hospitality workers, so that Scythians and Arabs can start making their multicultural amalgam all over again.

Also published at The Chowk

The Politics Of Death