The Grime Behind The Crime

Could an astonishing explanation for the rise and fall of violent crime be correct?

It seemed, at first, preposterous. The hypothesis was so exotic that I laughed. The rise and fall of violent crime during the second half of the 20th century and first years of the 21st were caused, it proposed, not by changes in policing or imprisonment, single parenthood, recession, crack cocaine or the legalisation of abortion, but mainly by … lead.

I don’t mean bullets. The crime waves that afflicted many parts of the world and then, against all predictions, collapsed, were ascribed, in an article published by Mother Jones last week, to the rise and fall in the use of lead-based paint and leaded petrol (1).

It’s ridiculous – until you see the evidence. Studies between cities, states and nations show that the rise and fall in crime follows, with a roughly 20-year lag, the rise and fall in the exposure of infants to trace quantities of lead (2,3,4). But all that gives us is correlation: an association that could be coincidental. The Mother Jones article, based on several scientific papers, claimed causation.

I began by reading the papers. Do they say what the article claims? They do. Then I looked up the citations: the discussion of those papers in the scientific literature. The three whose citations I checked have been mentioned, between them, 301 times (5). I went through all these papers (except the handful in foreign languages), as well as dozens of others. To my astonishment, I could find just one study attacking the thesis (6), and this was sponsored by the Ethyl Corporation, which happens to have been a major manufacturer of the petrol additive tetraethyl lead. I found many more supporting it. Crazy as this seems, it really does look as if lead poisoning could be the major cause of the rise and fall of violent crime.

The curve is much the same in all the countries these papers have studied. Lead was withdrawn first from paint and then from petrol at different times in different places (beginning in the 1970s in the US in the case of petrol and the 1990s in many parts of Europe), yet, despite these different times and different circumstances, the pattern is the same: violent crime peaks around 20 years after lead pollution peaks (7,8,9). The crime rates in big and small cities in the US, once wildly different, have now converged, also some 20 years after the phase-out (10). 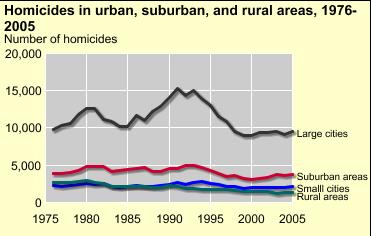 (US Bureau of Justice)

Nothing else seems to explain these trends. The researchers have taken great pains to correct for the obvious complicating variables: social, economic and legal factors. One paper found, after 15 variables had been taken into account, a four-fold increase in homicides in US counties with the highest lead pollution (11). Another discovered that lead levels appeared to explain 90% of the difference in rates of aggravated assault between US cities (12).

A study in Cincinnati finds that young people prosecuted for delinquency are four times more likely than the general population to have high levels of lead in their bones (13). A meta-analysis (a study of studies) of 19 papers found no evidence that other factors could explain the correlation between exposure to lead and conduct problems among young people (14).

Is it really so surprising that a highly potent nerve toxin causes behavioural change? The devastating and permanent impacts of even very low levels of lead on IQ have been known for many decades. Behavioural effects were first documented in 1943: infants who had tragically chewed the leaded paint off the railings of their cots were found, years after they had recovered from acute poisoning, to be highly disposed to aggression and violence (15).

Lead poisoning in infancy, even at very low levels, impairs the development of those parts of the brain (the anterior cingulate cortex and prefrontal cortex) which regulate behaviour and mood (16). The effect is stronger in boys than in girls. Lead poisoning is associated with attention deficit disorder (17,18), impulsiveness, aggression and, according to one paper, psychopathy (19). Lead is so toxic that it is unsafe at any level (21, 22).

Because they were more likely to live in inner cities, in unrenovated housing whose lead paint was peeling and beside busy roads, African Americans have been subjected to higher average levels of lead poisoning than white Americans. One study, published in 1986, found that 18% of white children but 52% of black children in the US had over 20 milligrammes per decilitre of lead in their blood (23); another that, between 1976 and 1980, black infants were eight times more likely to be carrying the horrendous load of 40mg/dl (24). This, two papers propose, could explain much of the difference in crime rates between black and white Americans (25), and the supposed difference in IQ trumpeted by the book The Bell Curve (26).

There is only one remaining manufacturer of tetraethyl lead on earth. It’s based in Ellesmere Port in Britain, and it’s called Innospec. The product has long been banned from general sale in the UK, but the company admits on its website that it’s still selling this poison to other countries ( 27). Innospec refuses to talk to me, but other reports claim that tetraethyl lead is being exported to Afghanistan, Algeria, Burma, Iraq, North Korea, Sierra Leone and Yemen (28,29), countries afflicted either by chaos or by governments who don’t give a damn about their people.

In 2010 the company admitted that, under the name Associated Octel, it had paid millions of dollars in bribes to officials in Iraq and Indonesia to be allowed to continue, at immense profit, selling tetratethyl lead (30). Through an agreement with the British and US courts, Innospec was let off so lightly that Lord Justice Thomas complained that “no such arrangement should be made again.” (31) God knows how many lives this firm has ruined.

The UK government tells me that because tetraethyl lead is not on the European list of controlled exports, there is nothing to prevent Innospec from selling to whoever it wants (32). There’s a term for this: environmental racism.

If it is true that lead pollution, whose wider impacts have been recognised for decades, has driven the rise and fall of violence, then there lies, behind the crimes that have destroyed so many lives and filled so many prisons, a much greater crime.

7. PB Stretesky and MJ Lynch, May 2001. The relationship between lead exposure and homicide. Archives of Pediatrics and Adolescent Medicine, vol.155, no.5, pp579-82.

10. Bureau of Justice, no date given. Homicide Trends in the U.S. http://bjs.ojp.usdoj.gov/content/homicide/city.cfm

20. Rick Nevin, 2007, as above, reports that “there is no lower blood lead threshold for IQ losses”.

21. David Bellinger concludes that “No level of lead exposure appears to be ‘safe’ and even the current ‘low’ levels of exposure in children are associated with neurodevelopmental deficits.”. April 2008. Very low lead exposures and children’s neurodevelopment. Current Opinion in Pediatrics, Vol.20, no.2, pp172-177. doi: 10.1097/MOP.0b013e3282f4f97b

23. Royal Society of Canada, 1986. Lead in the Canadian Environment. Science and Regulation. Cited by Rick Nevin, 2007, as above.

24. Agency for Toxic Substances and Disease Registry, 1988. The Nature and Extent of Lead Poisoning in Children in the United States. US Department of Health and Human Services. Cited by Rick Nevin, 2007, as above.

'Will Only Help War Mongers'