While a poor monsoon may have held back India's GDP growth, the country seems to be outperforming on the Lola Kutty development index. Are Indians developing an instant sense of humour? 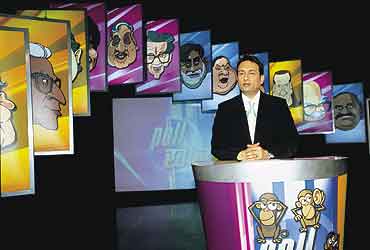 While a poor monsoon may have held back India’s GDP growth, the country seems to be outperforming on the Lola Kutty development index. "Just the way India has five-year plans for national development, there is a five-year plan for developing our sense of humour too," the Channel V VJ says, in her thick Malayali accent, referring to the growth of India’s comedy industry.

Kutty, who plays the straight-laced Malayali, scandalized by music video culture, seems to have better business sense than fashion sense because India’s comedy industry has in fact been on a roll over the last year. With shows like Polkhol (Star News) and Best of Gustakhi Maaf (NDTV India) making it among the top rated shows on their news channels, every TV channel is scrambling to put out more comedy. From David Dhawan’s Mujhse Shaadi Karogi to Priyadarshan’s Hulchul, comedy also came out tops, this year, in an industry where it has traditionally been just a sidekick to melodrama.

So, are Indians developing an instant sense of humour? Cyrus Broacha, the grand old man of new age Indian humour says he has been at the receiving end of the lack of India’s sense of humour. "As a country, we are emotional about everything. I have never understood why everything is sacred and why we can’t laugh at ourselves a little bit."

Amar Deb, head of Channel V says, "Indians are funny and our cultural influences are rich in humour. But we didn’t look at it that way because there is an MBA in all of us and all we were looking for was a winning formula. Now people are suddenly doing humour because it has become a winning formula these days."

Writers like Deb are now holding up cultural influences and differences that their young audiences can relate to as a new age retro or otherwise anachronistic, and laugh at affectionately. "The faster things change, the more there is to make fun of," says stand-up comic, Vir Das. For instance, the real version of the actor who spoofs the pot bellied, over made up, south Indian hero, speaking thickly accented, flowery English in a TV ad probably makes older viewers cry and younger ones cringe at how tacky he is, as he plays out on some television channel, on a languid afternoon. But the spoof on the actor, suddenly outdated, has generated warm giggles across generations. So, the funniest things are unfolding around the most Indian moments; those that we were embarrassed of and wanted to hide, or even those we were too busy to notice had humour in them.

One of the things we do enjoy without the help of flashbacks is the humour of politics. "We don’t like to laugh at ourselves, only at others," says Arshad ‘Circuit’ Warsi, the newest star of this newly resurgent comedy industry. And politicians seem like the best loved, most real entertainers as their every misstep, every fight and every backtrack becomes fodder not only for news shows but also in the slightly twisted world of news comedy shows. With many of India’s most colourful personalities entering Parliament, from the bombastic Navjot Singh Sidhu to Dharmendra and Govinda, politicians are not far behind. Mamata Banerjee and Mayawati’s high voltage rants, Laloo Yadav’s never ending one-liners, complete with amnesia about what he said outside Parliament, Vajpayee’s long pauses or Sonia Gandhi’s accent, all make for readymade entertainment without trying too hard. So, Polkhol, Star News’ surprise hit, has a team that watches all the news channels, replaying all the misspeaks at primetime. "There’s so much entertainment in politics, these days. All we do is hold up a mirror to that," says host Shekhar Suman.

Some politicians request Suman not to skewer them on the show or get very mad with him and don’t talk to his reporters. Others play it up to get popular, like Laloo picking up the phone and talking gibberish, supposedly Tamil.

But with a record number of channels jostling for space in the minds of ever younger viewers, a little attention is always welcome, even if it involves a bit of buffoonery. And younger, multiplex going audiences, are loosening up and enjoying humour, even if it is subtler or self deprecating. They are the ones who have led the transformation of David Dhawan from being the boss of broad comedies to his polished turn in this year’s hit Mujhse Shaadi Karogi and are luring people like Shailesh Dave to make The Great Indian Comedy show, a Saturday Night Live type show.

In fact, Suman says calling his work comedy is a misnomer. He says he just takes real news clips and satirizes it to bring the irony. But if politicians, cricketer- politicians, actors, soap stars make for so much fun what else are poor Suman and his ilk to do. If life deal you lemons, make lemonade, what?