Between 1928 and 1956, India won six straight Olympic gold medals and 24 consecutive matches, a record likely to stand for the foreseeable future 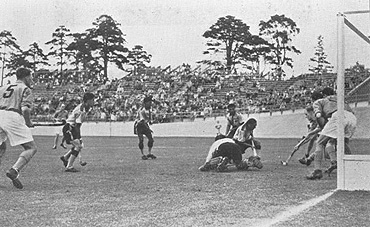 Exclusive Extracts from Olympics: The India Story by Boria Majumdar and Nalin Mehta

India claims to be the foremost in many things in the world. The world admits that she is foremost in hockey.

‘Can I See My Trousers In The Sun’:
The Beginning

Men’s hockey first appeared at the 1908 Olympic Games in London. It reappeared in Antwerp in 1920, returning to stay from the 1928 Amsterdam Games onwards. Women’s hockey waited much longer, finally debuting in 1980. 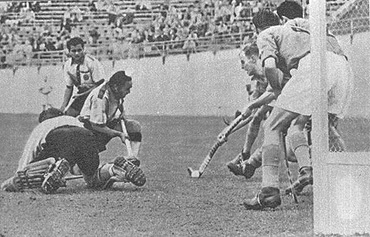 Between 1928 and 1956, India won six straight Olympic gold medals and 24 consecutive matches, a record likely to stand for the foreseeable future. Indians have won two more gold medals since, in 1964 and 1980. In fact, it was at India’s insistence that hockey was reinstated at Amsterdam after being dropped from the program of the eighth Olympiad in Paris in 1924. Anthony S. de Mello—from whose autobiographical essay we have borrowed the sub-title of this chapter—writes that before leaving for Amsterdam, India’s hockey players were ‘confident that they would not disgrace themselves’. At the same time they had not approached the Games with any fantastic hopes. Jaipal Singh, who had a first class degree from his native Ranchi and was then a student at Balliol College, Oxford, was appointed captain of the team…

Sent to Oxford by missionaries, Jaipal successfully led a team comprising of Indians studying at British universities to Belgium and Spain and had earned a great reputation as a hockey player in the UK, as is evident from his numerous profiles published in World Hockey magazine. When the team for Amsterdam was announced it included Jaipal, S. M. Yusef and the nawab of Pataudi Senior, who were already in Britain. Thirteen players sailed from Bombay, nine of them Anglo Indians, to lead India’s challenge at the 1928 Olympics.13 However, before sailing for London, there was a last-minute alarm when it was revealed that because of insufficient funds only 11 of the 13 selected players could undertake the tour. The shortfall, contemporary reports revealed, was Rs 15,000. That the crisis was serious was evident when the federation announced that in case sufficient funds weren’t garnered, Shaukat Ali of Bengal and R.A. Norris of the Central Provinces would not accompany the team. In the end, it was largely owing to the munificence of the sports-loving public of Bengal, who organized public collections to make up the funding shortfall, that the two players were able to make the trip. While he became known in later life as a prominent Parliamentarian and Adivasi leader, Jaipal described his hockey career in the UK in his memoirs thus:

"The effect of the tours of Indian students I conducted every year with the help of Aga Khan, ‘Kanji’ Baroda, Patiala, Bhopal and other Indian royalty was the formation of the Indian Hockey Federation…India decided to send a team to the Amsterdam Olympiad in 1928. I was still at Oxford a probationer for the Indian Civil Service…As after 1926 I could not play for the University team, I played for the Wimbledon Hockey Club…As at Oxford I continued to receive publicity in the London press. "

In a clear reflection of how haphazardly that first Olympic team was put together, and also of the times, he goes on to narrate the strange manner in, which he was appointed captain of the Indian team:

One early evening two Britishers, Colonel Bruce Turnbull and Major Ricketts, both of the Indian army, called at the Church Imperial Club. Turnbull was Secretary of the Army Sports Board in India and Ricketts was his lieutenant. I stood them drinks. They told me the Indian hockey team was coming the following week on its way to Amsterdam. ‘We want you to captain the team,’ I agreed but told them I would have to get leave from the India Office for absence during term time. I did not get leave!

I decided to defy the ruling and face the consequences. 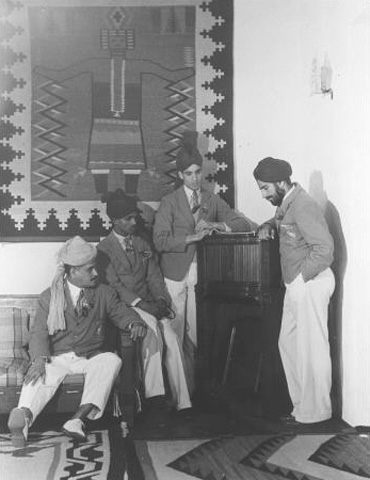 Los Angeles 1932: The Indian delegation in the Olympic village

Jaipal met his team when their boat docked at Tilbury on 30 March 1928. Having lived in England for a few years by now, he was unimpressed by what he saw as their rustic ‘untidy dress and crude demeanor’. The team was put up in a pension at South Kensington and Jaipal invited them a couple of times to the well-known Veeraswamy’s restaurant on Regent Street. ‘It was expensive to feed them. The Indian dishes were Hyderabadi but not cheap.’ Soon after arrival the players started addressing Jaipal as ‘skipper’ though he was yet to accept the offer formally. In the first few practice sessions, Shaukat Ali and Dhyan Chand caught Jaipal’s attention. Shaukat played for the Calcutta Customs and could adopt in any position. Dhyan Chand, a lance naik in the Indian army, had made his name in New Zealand, scoring the bulk of the goals for the Indian Army team in 1926. Dhyan Chand, Jaipal states: "…was humble. He had only one pair of trousers. I took him to Austin Reed on Regent Street. We went downstairs. Trousers galore were shown. ‘Can I take them upstairs and see them in the sun?’ That finished me. I told Shaukat the story. ‘What else do you expect of a Lance Naik?’ he laughed."

The Indians played a series of matches in London against leading club sides and haphazardly put together national teams like the Anglo Irish. Dhyan Chand scored in almost every game. India’s last engagement in England was at the Folkstone Easter Festival where they beat the English national team 4–0 and a team calling itself the Rossalians 18–0. Following these victories, the British and French press in unison suggested that the Indians were favourites for the hockey gold in Amsterdam.18 And they weren’t wrong.

When The Spokes Came Off